Democracy Now! correspondent Sharif Abdel Kouddous reports from Cairo as Al Jazeera journalists Mohamed Fahmy and Baher Mohamed are ordered released on bail after over a year in prison.

Mohamed Fahmy, a Canadian-Egyptian citizen, was the acting bureau chief for Al Jazeera English when he was arrested in December 2013 along with Australian correspondent Peter Greste and Egyptian producer Baher Mohamed. All three were charged with spreading false news and aiding terrorists. They were sentenced last June to between seven and 10 years in prison, a ruling struck a severe blow to press freedom in Egypt and sparked condemnation from around the world.

The court said the case against Fahmy and Mohamed is still pending.

SHARIF ABDEL KOUDDOUS: It was a rare moment of joy in an Egyptian courtroom. After more than 400 days behind bars, Al Jazeera journalists Mohamed Fahmy and Baher Mohamed were ordered released on bail.

ADEL FAHMY: Finally, we got vindicated today, and the case is almost over. And we’re just extremely, extremely happy and relieved that we finally have Mohamed back with us.

SHARIF ABDEL KOUDDOUS: Fahmy, a Canadian-Egyptian citizen, was the acting bureau chief for Al Jazeera English when he was arrested in December 2013 along with Australian correspondent Peter Greste and Egyptian producer Baher Mohamed. All three were charged with spreading false news and aiding terrorists. They were sentenced last June to between seven and 10 years in prison, a ruling that struck a severe blow to press freedom in Egypt and sparked condemnation from around the world. Egypt’s highest court of appeals overturned the ruling on January 1st, issuing a damning appraisal of the original trial.

On Thursday, when the retrial began, the mood was one of deep apprehension. The courtroom is located inside Egypt’s notorious Tora prison complex. The defendants’ cage has now been outfitted with thick soundproof glass, making it difficult to see the people who are on trial and nearly impossible to hear them. When Judge Hassan Farid began by calling the names of the defendants, their replies were barely audible.

Fahmy’s lawyer began by requesting a release on health grounds due to improper medical care available in prison to his client. Fahmy has been diagnosed with hepatitis C, and his arm is permanently disabled from a prior injury that never properly healed as a result of his harsh imprisonment. The judge then granted Fahmy’s request to come out of the defendants’ cage and address the court directly.

Fahmy had secretly renounced his Egyptian citizenship last December in the hopes of benefiting from a November decree that allows the president to deport foreigners convicted of crimes to their homes countries. That’s what happened to his Australian colleague, Peter Greste, on January 31st. Fahmy told the judge that a senior Egyptian government official called him and pressured him to give up his Egyptian passport so he could be deported. Fahmy did so, and after Peter Greste was deported, he thought his own release was imminent. His fiancée packed their bags and bought plane tickets to Canada. But the deportation was not to be, and the retrial was scheduled.

Fahmy talks to the judge about his colleague Peter Greste. “I am happy for his release,” he says, “but I don’t understand how a defendant in the same case, with the same evidence … is on a beach in Australia. We demand that we’re all treated equally.”

After a brief recess, the judge finally read out his decision granting the release of the two journalists. The courtroom erupted in cheers and applause. Family members hugged each other and could not hold back the tears. This is Mohamed Fahmy’s fiancée, Marwa Omara.

MARWA OMARA: I’m very happy, and now I can relax. Now I can sleep. I didn’t sleep for the last year. I had to do things that I never was doing. It was very tough for me. I’m a very simple woman, not into politics, not into—I’m not into anything. Suddenly I found myself going to see officials and doing things that I never expected myself to do. I think now I can just relax. I need to sleep.

SHARIF ABDEL KOUDDOUS: Fahmy is the only defendant who must pay a bail fee to secure his release. His was set at 250,000 Egyptian pounds, around 30,000 U.S. dollars. The family says they will find a way to come up with the money. Here’s Fahmy’s brother again, Adel.

SHARIF ABDEL KOUDDOUS: Will you be able to raise the money to—

SHARIF ABDEL KOUDDOUS: Fahmy and his whole family have become increasingly critical of the Canadian government and its handling of the case. Canadian Prime Minister Stephen Harper never publicly called for the release of one of his own citizens. Meanwhile, the Harper government enjoys close ties with the regime of Egypt’s military chief turned president, Abdel Fattah el-Sisi. Here’s Adel again.

ADEL FAHMY: The pressure form the Canadian government came too late. You know, we got a lot of promises, you know, but very, very disappointed in the lack of more urgent support or pressure. They were supporting us brilliantly on the ground as consular services, but in terms of government, I think they intervened very, very conservatively and not as relentless as the Australians.

SHARIF ABDEL KOUDDOUS: Nevertheless, it was a day of unbridled joy. After 411 days behind bars, the two journalists would finally be released from prison. For Baher Mohamed, he would finally be able to go home to see his three young children: Hazem, who’s four, Fairouz, who’s three, and his baby boy Haroun, who was born in August—while he was in prison. Baher’s wife, Jehan, was overcome with happiness.

“I’ll rush home to tell the children that Daddy’s coming home,” she says. “I have lived for a year in tragedy and sorrow.”

While the journalists are finally released from prison, they are not free. Their trial on terrorism-related charges is still on. But today was one small victory in Egypt’s increasingly authoritarian and repressive state. The case of the Al Jazeera journalists continues on February 23rd.

Crackdown on Brotherhood, Opposition Grows as Egypt Joins Ranks of Most Dangerous for Journalists 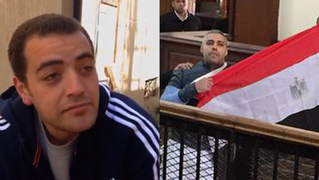