As a federal inquiry begins in the killing of three Muslim students in North Carolina and an Islamic center in Houston, Texas, was intentionally set on fire Friday, we look at a new report that exposes the people who fund and stoke anti-Muslim sentiment in the United States. The investigation by the Center for American Progress is called “Fear, Inc. 2.0, The Islamophobia Network’s Efforts to Manufacture Hate in America,” an update of a 2011 report. We are joined by the report’s co-author, Yasmine Taeb, Islamophobia project manager at the Center for American Progress.

NERMEEN SHAIKH: As a federal inquiry begins in the killing of three Muslim students in North Carolina and an Islamic center in Houston, Texas, burns down in a fire still under investigation, we turn now to a new report that exposes the people who fund and stoke anti-Muslim sentiment in the United States. The investigation by the Center for American Progress is called, quote, “Fear, Inc. 2.0: The Islamophobia Network’s Efforts to Manufacture Hate in America.”

NARRATOR: This is how the Islamophobia network operates. A group of foundations and donors provides the money—to date, more than $57 million. That money is given to a selection of tightly knit organizations that rely heavily on a handful of so-called experts that orchestrate misinformation about Islam. That misinformation then spreads to a larger network of activists, politicians, media and more, creating an echo chamber around the false idea that Islam is a violent religion.

MATT DUSS: And I think defining Islam writ large as a threat, as many in the Islamophobia network do, is simply wrong and will lead to bad policy.

NARRATOR: The Islamophobia network has real consequences for Muslim Americans. There’s been a nationwide push for laws targeting Muslims. In New York City, the NYPD conducted a spying program that covertly monitored and mapped the city’s Muslim communities. And in Boston, a Muslim doctor was assaulted after the Boston Marathon bombings.

AMY GOODMAN: This new report is an update on a 2011 investigation we covered here on Democracy Now!. For more, we’re joined from Washington, D.C., by Yasmine Taeb. She is co-author of “Fear, Inc. 2.0.: The Islamophobia Network’s Efforts to Manufacture Hate in America” and the Islamophobia project manager at the Center for American Progress. Last week, she wrote an article headlined “Connecting the Dots: The North Carolina Murders and Anti-Muslim Hysteria.” She is also an attorney specializing in national security.

Yasmine, welcome back to Democracy Now! Talk about this new report. What have you found new in these last few years?

YASMINE TAEB: Sure. Well, thank you so much, Amy, for having me. So, as you mentioned, in 2011 CAP first released their first report, their Islamophobia report, that detailed, basically—chronicled the tightly knit network, group of funders, organizations, activists, elected officials and media commentators, that are essentially fanning anti-Muslim sentiment in the United States. And what we found in our new report is that this network is not only working to marginalize a community of three million Americans by promoting discriminatory policies, but also we detailed how these policies are impacting the lives of ordinary Americans. So, for example, we know that the effect of the anti-Muslim hysteria that this network generates is in an uptick in the number of hate crimes. To give you an example, for instance, in the aftermath of the hysteria that was created over the construction of the so-called Ground Zero mosque in New York City, hate crimes in New York City against Muslims in 2010 were 300 percent higher than they were in 2009. And again, we’re seeing this now, whether it was in the aftermath of the Boston Marathon bombings or in the aftermath of the Charlie Hebdo attack and the rise in ISIS, etc. I think shedding light on this network was something that we wanted to do in 2011 in the first report, but in this second report we detailed how the policies, the discriminatory policies that this network is promoting, is in fact hurting the lives of average Americans.

NERMEEN SHAIKH: And, Yasmine Taeb, before we conclude, could you say a little about the recommendations that your report makes?

YASMINE TAEB: Sure. So, as Amy has mentioned and as you played the introductory video, since 2001, there has been over $57 million that’s been contributed to this fearmongering, anti-Muslim, anti-Islam organizations by eight very wealthy donors. What we’re trying to do and what was part of our recommendations is, obviously we’re trying to identify not just the funders, but also the organizations, the activists, the misinformation experts and all the politicians that are intimately connected to this network. We’re trying, one, to dry up the money. That’s obviously our main goal, because if we eliminate the money trail, if we eliminate these millions of dollars that are being donated to these organizations, that essentially their living is now just to promote discriminatory policies against three million Americans, I mean, that itself would be profound, if we can eliminate this money trail. But also, some of the other recommendations we made throughout the report was pushing back against these discriminatory policies. So, for example, anti-Sharia legislation. We’ve had more than 100 anti-Sharia bills introduced in the United States in more than 30 states. And this has been primarily due to this network pushing these discriminatory policies.

AMY GOODMAN: Yasmine Taeb, we want to thank you very much for being with us, co-author of this new report, “Fear, Inc. 2.0.: The Islamophobia Network’s Efforts to Manufacture Hate in America,” that’s been put out by the Center for American Progress. We will link to your report and your article, “Connecting the Dots: The North Carolina Murders and Anti-Muslim Hysteria,” at democracynow.org.

When we come back from break, we’ll be joined by Reverend Barber in Raleigh, North Carolina. A massive march took place this weekend. Stay with us. 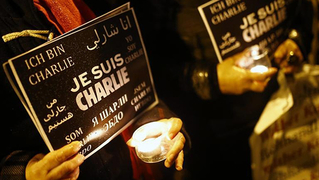