Protests are being held across the country today in what organizers call the “largest-ever mobilization of underpaid workers.” Fast-food workers in 230 cities are walking off the job as part of the “Fight for $15” campaign, a push for a $15-an-hour minimum wage and the right to form a union. Hundreds of workers in Boston held their action one day early in deference to today’s anniversary of the Boston Marathon bombings. We hear from some of the workers who kicked off the day of protest this morning at a McDonald’s in New York City.

AMY GOODMAN: We move right now, speaking of protests, to just what has happened in the last few hours. Fast-food workers in 230 cities are walking off the job as part of the Fight for $15 and a Union campaign, a push for a $15-an-hour minimum wage. Organizers are calling it the “largest-ever mobilization of underpaid workers.” Protests began this morning in Brooklyn, New York, outside a McDonald’s, just after 6:00 a.m.

PROTESTER: Are we ready to fight?

PROTESTER: Are we ready to fight?

ASHLEY: Fifteen and a union!

ASHLEY: Fifteen and a union!

ASHLEY: Good morning, everybody. My name is Ashley, and I work at McDonald’s. Today, we have fast-food workers in 200 cities, 40 countries, and we also have strikers outside of the United States in Italy striking with us today.

KATHERINE CRUZ: My name is Katherine Cruz. I work at McDonald’s. And I’m here to fight for 15, for what we deserve. We’ve been working for 8.75, and it’s not enough to live off of. And we work really hard to make 8.75 and not be able to live. I feel like we should all—not only McDonald’s, not only fast-food workers—everyone that lives off minimum wage should make more, so we can all support our families, support ourselves.

JAMES LANE: My name is James Lane, and I’m the Green Party candidate for District 11 in New York, and I’m here today in downtown Brooklyn supporting the 15 Now movement. Right now, the richest executives in this country are saying that they can’t afford to pay 15 now, when what they make in a single day is what they’re paying their workers for a whole year. And it’s just not right. We need to make some serious changes in this country. I’m running for a Green New Deal. I want to create public jobs and a living wage. And we think this can be done in this country, if we just stop the greed. This cycle of greed that goes on in this country has to end today. And that’s why I’m here supporting this movement.

CHAZ MACKEVICH: My name’s Chaz Mackevich [phon.]. We’re just fighting for workers’ wages out here, all workers—fast-food workers, construction workers, laundry workers—all workers. Workers are getting screwed in this country, and we can’t have that. We’ve got to stick together and get better wages, better living conditions, better life. Too many rich people not sharing the wealth. And we’re just working hard. We want our fair share, that’s all.

AMY GOODMAN: Some of the protesters outside a McDonald’s in Brooklyn. Fast-food workers in 230 cities are walking off the job as part of the Fight for $15 and a Union campaign, a push for a $15-an-hour minimum wage. Organizers are calling it the “largest-ever mobilization of underpaid workers.” 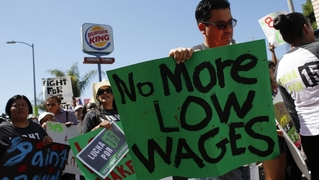