How Many More? 116 Environmental Defenders Were Murdered Last Year, Mostly in Latin America

As we continue to mark Earth Day, we look at a new report that finds killings of environmental activists on the rise, with indigenous communities hardest hit. According to Global Witness, at least 116 environmentalists were killed last year — more than two a week. Three-quarters of the deaths occurred in Central and South America. Just recently, three indigenous Tolupán leaders were gunned down during an anti-mining protest in northern Honduras, which has become the most dangerous country for environmental activists. We speak to Billy Kyte, campaigner for Global Witness and author of their new report, “How Many More?”

JUAN GONZÁLEZ: As we continue to mark Earth Day, we end today’s show with a new report that finds at least two people working to save the environment were killed each week in 2014. In total, the group Global Witness documented the murders of at least 116 environmental activists last year. Three-quarters of them were killed in Central and South America.

AMY GOODMAN: The report is called “How Many More?” It looks in detail at an activist who stood up to a mining project in one of the deadliest countries and survived. Her name is Berta Cáceres, and she is another winner of this year’s Goldman Environmental Prize. This is Berta Cáceres describing how she helped organize indigenous communities in Honduras to resist a hydro dam on the Gualcarque River because it could destroy their water supply.

BERTA CÁCERES: [translated] In more than 150 indigenous assemblies, our community decided that it did not want that hydroelectric dam.

NARRATOR: Berta filed complaints with the Honduran government and organized peaceful protests in the nation’s capital. As her visibility increased, she became a target for the government.

BERTA CÁCERES: [translated] We denounced this dam and were threatened with smear campaigns, imprisonment and murder. But nobody heard our voices, until we set up a roadblock to take back control of our territory.

NARRATOR: For well over a year, the Lenca maintained the roadblock, withstanding harassment and violent attacks. Tragically, Rio Blanco community leader Tomás Garcia was shot by the Honduran military at a peaceful protest.

BERTA CÁCERES: [translated] Seeing this man murdered, the community became indignant, forcing a confrontation. The company was told that they had to get out.

PROTESTER: [translated] We have 500 people here, and we are Rio Blanco comrades. We will defend Rio Banco, and we will not let them pass.

BERTA CÁCERES: [translated] And that is how Sinohydro left Rio Blanco. But it cost us in blood.

AMY GOODMAN: Honduran activist Berta Cáceres, who won the 2015 Goldman Prize, as well. For more, we’re joined by Billy Kyte, campaigner for Global Witness, author of their new report, “How Many More?” As it went to press, three more environmental and land activists were killed in Latin America in the space of three days.

Billy, welcome to Democracy Now! Lay out for us this report and what you have found.

BILLY KYTE: Sure. So we found last year that over 116 people, that we know about, were killed defending their rights to the environment and land. A shocking 40 percent of those victims were indigenous communities. So we’re seeing more and more the competition for natural resources intensifying and having very disastrous effects.

JUAN GONZÁLEZ: And why are so many in Central and South America being killed?

BILLY KYTE: Well, there’s a long history of social conflicts and social movements in Central and South America. There’s also—it’s a very resource-rich region. And many marginalized groups—for instance, indigenous peoples—are being targeted for the fact their lands are very rich in commodities, which are wanted by companies and political and economic interests. It’s also an area where civil society is very strong, which has—it’s a double-edged sword. One, it means they’re more exposed to violence and conflict around the defense of the environments and land. But also it means that they are better at monitoring these issues. So, although it is a global problem, we certainly see that Central and South America is where it’s been hardest hit.

JUAN GONZÁLEZ: Well, talk about the three indigenous Tolupán leaders who were gunned down during an anti-mining protest in northern Honduras. They had received death threats warning them to stop their attempts to protect the environment.

BILLY KYTE: So these were indigenous leaders who stood up against illegal mining and illegal logging in their communities, and they were gunned down, as you say, at a peaceful sit-in protest to stop—checking cars being filled up with illegal timber and minerals from their communities. And they then left the community for six months. They were granted emergency protection measures by the Inter-American Human Rights Commission. They returned after six months back to their community. But the perpetrators are still at large. They’re still walking freely in the village without—even though they have police arrest warrants out for them. And even, you know, a couple of weeks ago, one of the leaders was—who had been threatened, was killed. And this person had had protection measures from the Inter-American Human Rights Commission. So it’s still very much an ongoing crisis in that area.

AMY GOODMAN: Can you tell us a little more about the 2015 Goldman Prize winner who we just played a clip of, Berta Cáceres, and her significance and what she’s doing in Honduras?

BILLY KYTE: Well, she’s an emblematic case. I mean, she’s a very courageous activist. She fights for indigenous rights, but also women’s rights, as well. Her leadership in COPINH, indigenous network in Honduras, has been inspirational for many, many people. She’s suffered threats against her life. Two of her children have had to flee the country because of these threats. She continues to receive threats. Even recently, she received attempted plans to kidnap her. And despite this, she still struggles on with the fight to protect indigenous areas and the rivers of the Rio Blanco community.

JUAN GONZÁLEZ: And what is the responsibility of international bodies or governments on this issue of continuing killings of environmental activists around the world?

BILLY KYTE: Well, our report has shown there’s been a 20 percent increase last year from the previous year, and—of these killings. This is almost double the amount of journalists killed in the same period, but it doesn’t have the same amount of attention. This is a hidden crisis, which people need to monitor. International bodies need to really stand up and have a real wake-up call and realize that this is an issue. And what happens—what needs to happen is that governments need to make sure that perpetrators are accountable, that the problem is monitored systematically, that people are actually put in jail for these crimes, and the heightened risk posed to these environmental land rights activists is recognized. For instance, a Human Rights Council resolution would be helpful as a starting point to really put pressure on governments to act and bring perpetrators to account. Impunity breeds violence. And the environment is now seen as a key battleground for human rights, and people are dying every day for the protection of these rights.

AMY GOODMAN: In countries that are seen to have somewhat progressive leaders, like Evo Morales in Bolivia or Rafael Correa in Ecuador, in these particular countries there’s huge battles with the government and indigenous rights activists, environmental activists, around the extractive industries and the governments relying on this. Can you talk about this?

BILLY KYTE: Sure. So I think those governments, we have to be careful, because they have two different discourses: One is the domestic audience; one is the international audience. Internationally, they’re seen as the kind of purveyors of Madre Tierra, you know, Pachamama, Mother Earth, but actually, when the reality is that they are selling off a lot of their countries’ resources, particularly in the Amazon region, for instance. An Ecuadorean activist was killed during the U.N. climate change conference in Lima last year, for instance, and there are links for his activism into the fact that he was murdered. So, yes, we are seeing a lot of resource-rich areas being sold, often in secret resource deals, and this really must end. That’s where the kind of crux of the problem, the fact that governments and companies are allowing indigenous lands, other communities’ territories to be sold off to the highest bidder.

JUAN GONZÁLEZ: And you mentioned the Amazon, the key role of the Amazon in the fight to save our Earth, and the activism there. Has there been any reduction in the violence against environmental activists in that region of the world?

BILLY KYTE: I wouldn’t say so. No. I mean, just literally in November, December last year, four indigenous leaders in the Peruvian Amazon were killed by illegal loggers. And now these people, Edwin Chota and his compatriots, have been fighting for the official recognition of land title for their areas, of their indigenous communities, for almost over 10, 15 years. And the Peruvian government refused to officially recognize their land title, even though this had been promised over a long period of time. So illegal loggers were able to take advantage of this vacuum of power in those areas and illegally log in their communities. And anyone who stands up, like Edwin Chota and his colleagues, were killed. So, no, it’s particularly prevalent in the Amazon, and it’s an issue which is—which will continue to be—see on the airwaves—

AMY GOODMAN: Billy Kyte, we want to thank you for being with us, campaigner for Global Witness. We’ll link to your report, “How Many More?” which documents the killing of environmental activists worldwide.

I’ll be speaking at Colorado College Thursday night at 7:00. Check out our website. And we’ll be broadcasting from The Hague Monday, Tuesday and Wednesday. 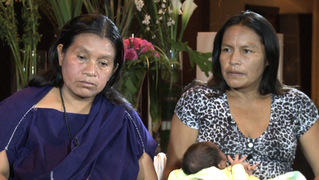