The Intercept revealed last month that it is quite easy to be deemed a “suspected terrorist” at airports in the United States. A leaked checklist used by the Transportation Security Administration shows an expansive list of “suspicious signs” for screening passengers, including yawning, fidgeting, whistling, throat clearing and staring at one’s feet. All of these, according to the TSA, are considered behaviors that indicate stress or deception. Well, now The Intercept has revealed who the program actually targets: not terrorists, but undocumented immigrants. Taking a five-week period at a major U.S. airport, The Intercept found that 90 percent of all those arrested were detained for being in the country illegally. Not a single passenger was arrested or suspected for ties to terrorism. The overwhelming detention of undocumented immigrants bolsters criticism that government screening programs have targeted passengers with racial profiling. We speak to the reporter who broke this story, Jana Winter.

AARON MATÉ: Last month, the website The Intercept revealed it’s quite easy to be deemed a suspected terrorist at a U.S. airport. A leaked checklist used by the Transportation Security Administration shows an expansive list of suspicious signs for screening passengers. Yawning, fidgeting, whistling, throat clearing and staring at one’s feet—all of these, according to the TSA, are considered behaviors that indicate stress or deception.

Well, now The Intercept has revealed who the program actually targets: not terrorists, but undocumented immigrants. Taking a five-week period at a major U.S. airport, The Intercept found that 90 percent of all those arrested were detained for being in the country illegally. Not a single passenger was arrested for ties to terrorism. The overwhelming detention of undocumented immigrants bolsters criticism that government screening programs have targeted passengers with racial profiling.

AMY GOODMAN: I hesitate to clear my throat here, but they’ve also cost taxpayers hundreds of millions of dollars. The checklist is part of the TSA’s controversial program known as the Screening of Passengers by Observation Techniques, or SPOT. It employs specially trained officers, known as behavior detection officers, to watch and interact with passengers going through screening. The TSA has trained and deployed thousands of these officers, spending more than $900 million on this program since its inception in 2007.

For more, we’re joined by the reporter who broke the story. Jana Winter is a reporter with The Intercept, her latest piece headlined ”TSA 'Behavior Detection' Program Targeting Undocumented Immigrants, Not Terrorists.”

So, explain how, and welcome to Democracy Now!

JANA WINTER: Thanks for having me. Well, we looked at—to be clear, this is just a five-week period at one major international airport in 2007. We don’t know if this is still what’s going on, although all of my sources currently at TSA say it is. But if you look through what happened during this time period, so 429 times, a behavior detection officer interacted with a passenger they thought might be suspicious—meaning those same indicators on that checklist, like your luggage is heavier than it appears to be—which is me and everyone. So, then, out of that group, 47 were referred to law enforcement. Out of the 47, 16 were arrested in total. Fourteen were for being in the country illegally. And that’s about 3.75 percent of their entire work product for five weeks, resulted in an arrest. And they were for people being in the country illegally.

AARON MATÉ: How did racial profiling factor into these detentions, do you think?

JANA WINTER: Well, according to my sources within the program, or people who have worked in the program in the past, or any of the numerous oversight agencies that have been looking at this program for quite a while, the way that it was designed and the model it was based off of was related to what Customs and Border Protection was doing. This is how—this is a very effective way for finding drugs or people being smuggled across the border. You’re looking for fake IDs, you’re looking for fraudulent travel, you know, any kind of document. You can, according to my sources, look for these signs, like confusion, people who are wearing pretty similar identical outfits that are brand new, and luggage—all the signs that appear on the checklist for terrorism. But that’s not how you find terrorists. It’s just how you find undocumented people in the country. So, my sources say, from the very beginning, this was never going to find terrorists.

AMY GOODMAN: And so, what is the TSA saying about these documents? And are they saying that you are now arming the terrorists with the documents of how they seek them out?

JANA WINTER: I have no idea, because when I reach out to them for comment, I hear they have been skiing and unavailable for five weeks, or they do not respond. Last night, when I got into Penn Station at about 11:30, all of a sudden, the one TSA spokesman started favoriting all of my tweets on Twitter, and I was like, seriously? I’m still waiting for your comment. I asked, here’s what I have, specifically, do these numbers indicate current trends, nationwide trends? I have no idea what they’re saying. They have been defending this program that everyone else has said is based on complete junk science and has spent over a billion dollars, basically, doing the job of Customs and Border Protection, which is not the mission of the TSA.

AARON MATÉ: Well, can you talk about this, the TSA encroaching on the mandate of another agency and then possibly jeopardizing the rights of people who are undocumented, but not trying to cross a border, per se?

JANA WINTER: Well, in some cases they are trying to cross a border, because once you go through an airport, you know, sort of screening point.

JANA WINTER: But for the last six years, since its inception almost, the GAO, DHS Inspector General’s Office, various congressional committees have said, “Looks like you’re targeting undocumented immigrants.” But TSA has this thing where they classify everything as sensitive security information. It’s like their own invented classification. So they couldn’t release anything. In the GAO reports, you just see, like, redacted, redacted, TSA would not supply the documents. People have long been saying that this is what’s happening. We just now have numbers to show that, here it is, where are your terrorists?

AMY GOODMAN: Well, Jana Winter, we want to thank you very much for being with us, a reporter with The Intercept. Her latest piece is headlined ”TSA 'Behavior Detection' Program Targeting Undocumented Immigrants, Not Terrorists,” and we’ll link to it at democracynow.org. 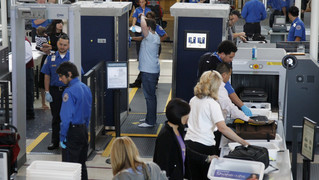