As negotiations continue, WikiLeaks has published leaked chapters of the secret Trans-Pacific Partnership — a global trade deal between the United States and 11 other countries. The TPP would cover 40 percent of the global economy, but details have been concealed from the public. A recently disclosed “Investment Chapter” highlights the intent of U.S.-led negotiators to create a tribunal where corporations can sue governments if their laws interfere with a company’s claimed future profits. WikiLeaks founder Julian Assange warns the plan could chill the adoption of health and environmental regulations.

AMY GOODMAN: We return to our exclusive interview with WikiLeaks founder Julian Assange. I spoke to him inside the Ecuadorean Embassy in London on Monday.

AMY GOODMAN: Julian Assange, let’s stay with the United States for a moment, with the TPP, the Trans-Pacific Partnership, which certainly doesn’t only involve the United States, but there’s a huge debate within the United States about it right now. And I dare say, some of that debate is as a result of what WikiLeaks revealed. For some people, this treaty, that will determine 40 percent of the global economy, the only thing that we have seen about it comes from WikiLeaks. Explain what the TPP is and the information that you got, that you put out about this top-secret agreement.

JULIAN ASSANGE: Well, the TPP is an international treaty that has 29 different chapters. We have released four of them, and we are trying to get the remainder. For the information that has been released, through the chapters that we got hold of and through some congressmen who have seen the contents of some of the others, but they are not allowed to write it down—

AMY GOODMAN: They can go into a room and look at it.

JULIAN ASSANGE: They can go into a room. It has been—it’s not formally classified, but it’s being treated as if it was classified, in terms of how the information is being managed. They go into a room. If they try and take notes, the notes have to be handed over to the government for safe keeping. And, of course, congressmen under those situations won’t take notes. So it is very well guarded from the press and the majority of people and even from congressmen. But 600 U.S. companies are part of the process and have been given access to various parts of the TPP.

OK, so it’s a—the largest-ever international economic treaty that has ever been negotiated, very considerably larger than NAFTA. It is mostly not about trade. Only five of the 29 chapters are about traditional trade. The others are about regulating the Internet and what Internet—Internet service providers have to collect information. They have to hand it over to companies under certain circumstances. It’s about regulating labor, what labor conditions can be applied, regulating, whether you can favor local industry, regulating the hospital healthcare system, privatization of hospitals. So, essentially, every aspect of the modern economy, even banking services, are in the TPP.

And so, that is erecting and embedding new, ultramodern neoliberal structure in U.S. law and in the laws of the other countries that are participating, and is putting it in a treaty form. And by putting it in a treaty form, that means—with 14 countries involved, means it’s very, very hard to overturn. So if there’s a desire, democratic desire, in the United States to go down a different path—for example, to introduce more public transport—then you can’t easily change the TPP treaty, because you have to go back and get agreement of the other nations involved.

Now, looking at that example, what if the government or a state government decides it wants to build a hospital somewhere, and there’s a private hospital, has been erected nearby? Well, the TPP gives the constructor of the private hospital the right to sue the government over the expected—the loss in expected future profits. This is expected future profits. This is not an actual loss that has been sustained, where there’s desire to be compensated; this is a claim about the future. And we know from similar instruments where governments can be sued over free trade treaties that that is used to construct a chilling effect on environmental and health regulation law. For example, Togo, Australia, Uruguay are all being sued by tobacco companies, Philip Morris the leading one, to prevent them from introducing health warnings on the cigarette packets.

AMY GOODMAN: That we have in the United States on our own cigarette packages.

Now, it’s not so easy to get up these cases and win them. However, the chilling effect, the concern that there might be such a case, is severe. Each one of these cases, on average, governments spend more than $10 million for each case, to defend it, even successfully. So, if you have, you know, a city council or a state considering legislation, and then there’s a threat from one of these multinationals about expected future profits, they know that even if they have the law on their side, even if this TPP is on their side, they can expect to suffer. 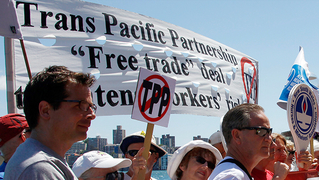