To mark her 100th birthday, we pay tribute to the legendary activist and Detroit-based community organizer Grace Lee Boggs. We play an excerpt of the documentary, “American Revolutionary: The Evolution of Grace Lee Boggs,” and revisit a 2008 Democracy Now! interview about Boggs’ work in the civil rights, Black Power, labor, environmental justice and feminist movements for seven decades.

GRACE LEE BOGGS: I feel so sorry for people who are not living in Detroit. People are always striving for size, to be a giant, and this is a symbol of how giants fall. Keep recognizing that reality is changing and that your ideas have to change. Don’t get stuck in old ideas.

ANGELA DAVIS: Grace has made more contributions to the black struggle than most black people have.

GRACE LEE: How did you become a philosopher?

GRACE LEE BOGGS: I’ll just go back 70 years. I’m not sure why I am who I am. I think it does have something to do with the fact that I was born female and born Chinese.

RON SCOTT: Folks didn’t really think about Grace as a Chinese American. She was Grace. You know, she was just one of us.

GRACE LEE BOGGS: I think the lightbulb goes on, very often, in conversations that people have, and we don’t pay attention to it.

GRACE LEE BOGGS: I find it very, very difficult to take. I want to tell you honestly. Their talk was not cheap!

SHEA HOWELL: Oh, god, yes, she made all kinds of people cry, myself included.

AMY GOODMAN: Grace, how would you describe where we stand now?

GRACE LEE BOGGS: One of the difficulties when you’re coming out of oppression is that you get a concept of the messiah. You have to get to that point that we are the leaders we’ve been looking for. We are the children of Martin and Malcolm. I don’t know what the next American revolution is going to be like, but we might be able to imagine it, if your imagination were rich enough.

AMY GOODMAN: A clip from American Revolutionary: The Evolution of Grace Lee Boggs. Well, today, in honor of Grace Lee Boggs’ 100th birthday, we revisit an interview I did with her in 2008, talking to her about her activism in Detroit, about her work in civil rights and Black Power, labor, environmental justice and feminist movements for seven decades. I asked her about her experiences with Malcolm X.

GRACE LEE BOGGS: I first met Malcolm through his brother Wilfred. One of the first mosques is in—in fact, the mosque number one, I think, is in Detroit. And my sense of Malcolm and of the movement, I think, is very different from that of many people, partly because I thought of Mr. Muhammad not so much in terms of his bizarre concepts, but as someone who, like many Muslims, I think, today, have a sense of themselves as part of another development, that is not Western development, that there must be another way. And I heard Mr. Muhammad, you know, head of the Nation of Islam, make some of these speeches. I heard—I met Wilfred, Malcolm’s brother, for the first time. I began to host meetings at my home where he could talk to people and give them a sense that—most people think of the black movement in the ’60s mainly as a struggle for white rights, but for Muslims, for people who joined the Nation, it was a question of creating our own identity. It was more a part of the identity movements of the ’60s than it was just a rights movement. And I wanted folks to understand that. And so, I began working with Malcolm. I was one of the organizers of the Grassroots Leadership Conference, where he made his famous speech.

AMY GOODMAN: That speech being?

GRACE LEE BOGGS: The speech that—

GRACE LEE BOGGS: —was made on November 10th, 1963, a few weeks prior to the assassination of JFK, at which he made his remark, “The chickens have come home to roost,” which led to his suspension by Mr. Muhammad. And then, after he left the—after he actually left, forced out of the Nation, he was looking for what he should do. A group of us came here to New York to meet with him and asked him to come to Detroit to work with us, because we understood Malcolm’s hunger for new ideas, that he was a person always searching to transform himself. And so we met with him and asked him, and he said no, that he was going to be an evangelist, and he could not become an organizer with us.

AMY GOODMAN: What do you mean an evangelist?

GRACE LEE BOGGS: He felt that his voice was what needed to be heard. And so, he made the Hajj, and he made this enormous discovery that it’s not a question of your biology, that there are people of all races who are part of this sort of humanist journey that we’re making. And he came back to this country, and he said—I think most people don’t know that—he said, “I’m a revolutionary, and I’m a Muslim. That’s all I know about myself. Where I’m going to go, what ideology I’m going to develop, I don’t know. But I must crawl before I walk, I must walk before I run, and I don’t think I’ll have time.” This was in November or December of 1964. He was killed on February 21st, 1965. So we’ll never know what Malcolm would have become. He was a person, as all of us are, in the process of transformation.

AMY GOODMAN: How would you describe him, knowing him, meeting him, his personality? What struck you about him?

GRACE LEE BOGGS: He was one of the gentlest people I’ve ever met. People don’t know that. I can remember, after he was assassinated, attending a meeting, and I remember young people getting up and saying Malcolm stands for “by all means necessary.” They had taken that little bit of him and made it him. Which isn’t true. I mean, it’s not true of any of us, obviously, but it was particularly not true of Malcolm. And I think people who read the autobiography, to this day, understand that he was in the process of transformation. And I think that’s one of the most important qualities of a revolutionary, to be transforming yourself, to be expanding your humanity as events challenge you.

AMY GOODMAN: And, Grace Lee Boggs, what was your understanding at the time of who murdered Malcolm X? In fact, where were you in February when he was gunned down?

GRACE LEE BOGGS: On February 21st, 1965, it was a very snowy day in Detroit. I was picketing the church of Reverend Shoulders, who had said that militant blacks—he had made some terrible remarks about militancy among blacks. So we came back from the picketing, my husband Jimmy and I, and I got a call from Pat Robinson in New York that Malcolm had been assassinated. And we didn’t know who it was. We were not ready to attribute the murder to the Nation. So we tried to convene an international tribunal that would include Bertrand Russell and Jean-Paul Sartre. We thought there needed to be an investigation. It was very hard at that point, when black unity seemed the answer to so many of our issues, to think of something such disastrous happening inside the black community, that could actually have been—at the moment, at that time, we did not know that Malcolm, because of the conduct of Mr. Muhammad, had already switched from him in his heart.

AMY GOODMAN: And how would you compare what Malcolm X represented to Dr. King? You hadn’t personally met Dr. King, but you were certainly living between these two tendencies, movements.

GRACE LEE BOGGS: Well, in Detroit we thought King was a little naive. We were very—I mean, Detroit is made up of many people who have come from the South. So we were very happy—we welcomed the Montgomery march. We felt—in fact, it was so interesting. Many blacks who had escaped from the South and come North and had considered that blacks in the South were sort of backward, because they hadn’t done the same thing, began to recognize that something might come from the South rather than from the North. But then, the issues that were facing people in the South were not the same as those that were facing us in the North, and so we had to redefine what was necessary in the North.

AMY GOODMAN: Legendary American revolutionary Grace Lee Boggs. That was Grace speaking in 2008 on Democracy Now! Well, June 27th, she turned 100 years old. We’ll link to all of our interviews with her over the years. The film, American Revolutionary: The Evolution of Grace Lee Boggs, has just won some major awards and is traveling the country. Well, in the week leading up to Grace Lee Boggs’ 100th birthday, there were many activities. Five hundred people came out on Friday night to the African American History Museum in Detroit to celebrate. Grace wasn’t able to make it. She lives comfortably at her home in Detroit surrounded by her beloved community. A very happy birthday to you, Grace. 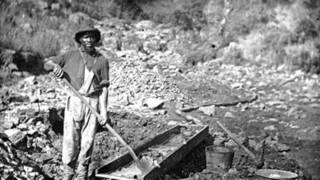