Senator Patrick Leahy of Vermont also attended Monday’s opening of the Cuban Embassy in Washington, D.C. He played a pivotal role in the secret negotiations between the United States and Cuba, and helped with the release of the Cuban Five. Leahy made headlines last year when it was revealed that Leahy helped the wife of one of the members of the Cuban Five become pregnant. Gerardo Hernández, the baby’s father, is one of the three former Cuban intelligence agents released in December as part of a prisoner swap amidst thawing ties with Cuba. While he was not allowed conjugal visits, Hernández was able to impregnate his wife by having his frozen sperm transferred to her in Panama, a process authorized by U.S. officials, funded by the Cuban government and facilitated by a staffer for Leahy. We speak to Leahy and his wife, Marcelle, at the Cuban Embassy.

AMY GOODMAN: I also spoke with Senator Patrick Leahy of Vermont, who was with a congressional delegation who was honoring the opening of the embassy and the raising of the Cuban flag. Senator Leahy has played a pivotal role in secret negotiations between the United States and Cuba for years and helped release the Cuban Five, including Gerardo Hernández. I asked Senator Leahy about the significance of the day.

SEN. PATRICK LEAHY: Well, I find it quite emotional. You know, I think one of my first trips to Cuba, 15 or so years ago, I went to a baseball game, a U.S. team playing in Havana. They played the Cuban national anthem and the U.S. national anthem. Everybody in there stood at attention and cheered both national anthems, including Fidel Castro. And it was very emotional. This morning, you’re standing in this—now on Cuban soil in this embassy. And to see the American flag, the Cuban flag flying side by side, to hear both our national anthems, I found it very emotional and very satisfying.

AMY GOODMAN: Well, you have been instrumental in achieving this moment. You have been involved in the secret negotiations with Cuba to get to this point, to normalize relations. Can you tell us what you did?

SEN. PATRICK LEAHY: Well, I had many, many meetings down there and some meetings in Washington, but a lot of meetings in New York. Bruno Rodríguez and others could come to there.

SEN. PATRICK LEAHY: The foreign minister, I’m sorry. The foreign minister could come to the Cuban U.N. Mission without getting permission, in New York. So I’d meet him there. Raúl Castro joked with me, knew I showed up one day on crutches because I had damaged my leg hiking in Vermont the day before. But then we had others who would go to Canada. And the Canadians deserve a great deal of credit, because they set a venue where Cubans and U.S. negotiators could meet secretly in Canada and negotiate.

Then, I sent a letter to the pope before he met with the president. The president thought he heard some of my talking points. The pope sends a letter back to Cardinal Ortega in Havana, who brings it to the president in the White House, tells a great story of walking in a room. A man walks up to him and says, “Hello, Cardinal, I’m Barack Obama.” He said, “I knew who he was.” But these are all step-by-steps.

One of the most important, the so-called accidental handshake between President Obama and President Castro at Nelson Mandela’s funeral. There was no accident. President was criticized for it. I said, “Nelson Mandela, if he had been at a world leader’s funeral, he would have shook hands even with enemies.” And then the meeting they had in Panama, both got along very well.

And finally, everything came together. It was a thrill. I took the president’s plane, went down, picked up Alan Gross on December 17th. Another plane brought the remaining members of the Cuban Five down. Third one picked—went down to another airfield, picked up a CIA asset that the Cubans had held for years and years. We’re all on the ground 31 minutes, took off, flew back. It was a new day.

AMY GOODMAN: They’re all now in Cuba. You were also, shall we say, seminal, your office, in the birth of the child of one of the Cuban Five. Can you talk—

SEN. PATRICK LEAHY: You want to make sure you explain that carefully, because one reporter said, “What about this Cuban woman you helped get pregnant?” I said, “Well, no. I mean, what happened, the wife of one of them had come to my wife.”

SEN. PATRICK LEAHY: And I said—she was reaching an age where she might not have children anymore. She loved her husband. Was there some way they could arrange for her to become pregnant by her husband? We worked with the Bureau of Prisons. We had—we actually had times this had been done. The Cubans paid for it all. She was impregnated in Panama.

AMY GOODMAN: Where was Gerardo imprisoned?

SEN. PATRICK LEAHY: He was imprisoned out West in the United States. His sperm was given to her; she was impregnated. They have a beautiful little girl. They named her—well, the English word is “Gem.” And it is amazing. But I give my wife as much credit for that, and Eric Holder, who worked with me in the Bureau of Prisons to make it happen.

AMY GOODMAN: And could a next president, if it was a Republican president, reverse all this, close the embassy?

SEN. PATRICK LEAHY: No, nobody is going to. It’s too popular with the American people.

AMY GOODMAN: Your thoughts on this day? You are here with your husband, Senator Patrick Leahy.

MARCELLE LEAHY: My husband and I have been traveling to Cuba for a little over 15 years. And we are just overwhelmed with the thought that now we’re going to begin the normalization of relations. This is, unfortunately, not the end; it’s the beginning of a lot more hard work. And it’s long overdue.

AMY GOODMAN: So, I was asking Senator Leahy about the Cuban Five, saying he was seminal in the birth of a child. But he said, “You’ve got to explain that,” but then went on to say, “It’s actually my wife.” Can you talk about your experience in Cuba and how your exchange led to something quite amazing?

MARCELLE LEAHY: I think he’s giving me more credit than I deserve, but I did meet with Adriana, and her story was very emotional. And it’s a young couple who have seen the years slip by, and they want to have a child. They want to have more family. And person to person, human being to human being, I don’t know how you could be anything but moved by her story, by her sincerity. And she asked me to intercede with my husband, and I told her that he had heard her words and that he was a good man and that I would talk to him, but I didn’t have to intercede. And things involved, because of a lot of hard work from other people, and they now have a beautiful little girl. It’s as it should be. And maybe if there was a little bit of help towards moving along our negotiations, with the willingness of our two countries to work this out, it makes me very happy.

This is Democracy Now!, democracynow.org, The War and Peace Report. When we come back, we hear the voices of diplomats, of politicians, of activists who have been key in coming to this day, July 20th, 2015, the day the embassies of Cuba and the United States reopened after 54 years in their respective capitals, Washington, D.C., and Havana. Stay with us.

Is the Era of U.S.-Backed Anti-Castro Terrorism Over? Reflections on Restored Ties Between Nations

NEXTIs the Era of U.S.-Backed Anti-Castro Terrorism Over? Reflections on Restored Ties Between Nations 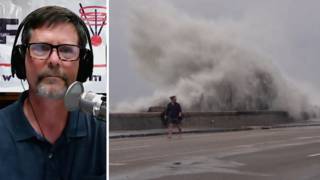