Human Rights Watch has accused Saudi Arabia of using U.S.-made cluster munition rockets in at least seven attacks in the Yemeni city of Hajjah between late April and mid-July. Dozens of civilians were killed or wounded, both during the attacks and later, when they picked up unexploded submunitions that detonated. Neither the United States, Saudi Arabia or Yemen have joined the global convention banning the use of cluster munitions. Kenneth Roth of Human Rights Watch criticized the U.S. stance on cluster munitions. “The U.S. thinks that cluster munitions are legitimate weapons,” Roth said. “The U.S. still hasn’t signed onto the landmines treaty. So, the U.S. is very much behind the rest of the world.”

AMY GOODMAN: We turn right now to Yemen. We turn to Yemen because, well, a Saudi-led airstrike killed 36 civilians working at a bottling plant in the northern province of Hajjah on Sunday. Another attack on the Yemeni capital Sana’a hit a house and killed four civilians. The news comes amidst new evidence the Saudi-led forces have used cluster munitions in Yemen. Human Rights Watch said it found U.S.-made cluster munition rockets likely used in at least seven attacks in Hajjah between late April and mid-July. Dozens of civilians were killed or wounded, both during the attacks and later, when they picked up unexploded submunitions that denotated. Neither the United States, Saudi Arabia or Yemen have joined the global convention banning the use of cluster munitions.

KENNETH ROTH: As you note, the fact that the relevant countries have not ratified the cluster munitions treaty, while it would be helpful to do so, it’s not decisive, because all of them have ratified the Geneva Conventions, which prohibit indiscriminate warfare. And cluster munitions are, by definition, indiscriminate. They scatter over wide areas, so they should never be used in civilian-populated areas to begin with. Plus they leave a residue. Not every munition explodes on contact with the ground, and they become antipersonnel land mines for people to just stumble upon and die. So the U.S. should be using pressure on the Saudis not to be using these weapons at all, but certainly not to be using them in populated areas where, as we’re seeing, Yemenis are being killed.

AMY GOODMAN: Explain what these weapons are and what they do.

KENNETH ROTH: They’re essentially area-denial weapons. There is a canister with, you know, upwards of 200 submunitions, little bombs, inside. The canister opens in the sky and spreads these submunitions over a wide area. Each one of those is lethal, so you don’t want to be in that area as these things rain down on you. You also don’t want to walk through that area afterwards, but it becomes effectively a land mine field, because these cluster munitions are unreliable and a significant number don’t initially explode. They only explode later, when somebody touches them or stands on them.

AMY GOODMAN: How do they affect the human body?

KENNETH ROTH: They’re devastating. They’re like standing on a land mine. They, at minimum, will rip off your limbs, and they very frequently are completely lethal.

AMY GOODMAN: I want to turn to a video released by Human Rights Watch featuring interviews with victims of cluster munitions in Yemen.

AZIZ HADI MATIR HAYASH: [translated] We were together, and a rocket hit us. It exploded in the air, and cluster bombs, submunitions, fell out of it. Before we left the house with the sheep, two submunitions fell down while others spread all over the village. One exploded, and the other still remains. My cousins and I were wounded.

FATIMA IBRAHIM AL-MARZUQI: [translated] Three brothers were killed—two children and one adult. It hit us while we were sleeping, and we were all wounded, including my brothers. I can’t walk. My mother carries me. She gets me out, washes me, as well as my brother. My whole body is wounded. My dress was burned that night. My hands were burned, and my bones were broken.

AMY GOODMAN: Those were victims of cluster munitions in Yemen. Ken Roth is executive director of Human Rights Watch, which put out this video. So, talk about what Saudi Arabia is doing right now in Yemen.

KENNETH ROTH: Well, Saudi Arabia is leading a coalition which is fighting the Houthi rebel forces in Yemen, and it’s repeatedly using indiscriminate forms of warfare. A big part of the problem has been these cluster munitions, but we’ve seen time and time again that even more targeted weapons are being targeted in the wrong place. These are sophisticated weapons; the Saudis should be able to target them only at military targets. But we’re finding often that they’re not. And that’s why we’re seeing such a significant civilian toll.

AMY GOODMAN: So they’re being used to terrorize.

KENNETH ROTH: Well, they’re being used at least without much care as to who is hit. There is a sense that, particularly in the northern areas, which are predominantly Houthi, that there’s not so much concern about civilians.

AMY GOODMAN: I mean, the U.S. just sealed a deal with Saudi Arabia for military weapons and jets that’s the largest deal in the world.

KENNETH ROTH: The U.S. obviously views Saudi Arabia as a major supporter of the U.S. military complex, you know. And airplane producers and the like need these contracts—think they need these contracts, in order to continue to be profitable. That shouldn’t be happening at the expense of civilians on the ground. The U.S. should be willing to live by the principles that it is theoretically signed up for in the Geneva Conventions and ensure that anybody it sells arms to is not using those arms to indiscriminately kill civilians, as the Saudis have been doing.

AMY GOODMAN: Human Rights Watch is calling for a U.N. inquiry into violations on all sides in Yemen?

KENNETH ROTH: Absolutely. In fact, there is a conference coming up reviewing compliance with the new cluster munitions treaty. And one of the problems is that the U.K., Canada and Australia, all of which had joined the cluster munitions treaty, are pushing to water down this inquiry. They’re trying to put “allegedly” in front of the evidence we have that Saudi clusters have killed civilians in Yemen.

AMY GOODMAN: Why does the U.S. want to water this down?

KENNETH ROTH: Well, I mean, the U.S. thinks that cluster munitions are legitimate weapons. The U.S. still hasn’t signed onto the land mines treaty. So, the U.S. is very much behind the rest of the world. As most nations of the world want to ban these inherently indiscriminate weapons, the U.S. has a huge arsenal of them, it doesn’t want that arsenal limited, and it hates the idea of treaties that are restraining the Pentagon on humanitarian grounds. It lives with the Geneva Conventions because it understands that those help to fight a better war. But the add-ons that Human Rights Watch and others have pressed—the land mines treaty, the cluster munitions treaty and the like—the Pentagon hates and has prevented Obama from signing onto them, and is trying to undermine enforcement, using U.S. allies around the world to do that.

AMY GOODMAN: How much difference does mass protest make around something like this?

KENNETH ROTH: I think it makes all the difference in the world. In other words, Obama doesn’t want to be seen as underwriting indiscriminate warfare, even if it is on the other side of the world. If it happens under the radar screen, if the Pentagon is able to push this quietly, there’s no big political cost to Obama. But I think rabble-rousing and publicity helps make Obama responsible, and he’s going to have a hard time standing up and saying, “I don’t really care about indiscriminate warfare.”

AMY GOODMAN: Just to be clear, the land mine treaty that the U.S. also has not signed onto, that’s the one that Princess Di was pushing so many years ago, right, among many other people?

KENNETH ROTH: Precisely. And, in fact, the U.S. government is—has limited the use of land mines. And even though it hasn’t joined onto the treaty, it recognizes that these are weapons that are extremely difficult to use because of public relations problems. And so, there has been a real shift at the Pentagon. We haven’t seen that shift yet, in any significant way, with cluster munitions.

AMY GOODMAN: So, you have this situation where people are being struck, civilians are being struck, by cluster munitions by the Saudi-led attacks on Yemen, yet Saudi Arabia continues to lead a blockade against people leaving. Can you explain what’s happening there?

KENNETH ROTH: Well, there’s an enormous humanitarian crisis in Yemen. It is already a country that is very dependent on international assistance for basic things like water and the like. And because the Saudis have been blockading the country, trying to prevent fuel and other things from getting into Yemen as part of its effort to fight the Houthi rebels, the Yemeni people are suffering. And we’re seeing enormous numbers of people who are facing malnutrition and even starvation because of the deprivation caused by this blockade.

AMY GOODMAN: I mean, the figures are amazing. According to the U.N., 21 million Yemenis, a staggering 80 percent of the population, need assistance. And half the population is facing hunger, famine. More than 15.2 million people lack access to basic healthcare, and over 20 million lack access to safe water.

KENNETH ROTH: Yeah, I mean, it’s absolutely horrendous, and it really underscores the importance of making clear that if you’re going to go to war, yes, you shoot at the other side’s combatants, but you can’t use means that cause the entire civilian population to suffer. And that’s what the Saudi-led coalition is doing in Yemen today.

AMY GOODMAN: Human Rights Watch executive director Ken Roth speaking here in New York. This is Democracy Now! When we come back, Mr. Smith Goes to Prison. Stay with us. 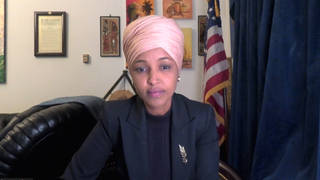