“Criminal in Blue”: Should NYPD Officer James Frascatore Be Arrested for Assault? (Pt. 2)

New York police officer James Frascatore made headlines earlier this month when he mistakenly identified retired tennis star James Blake as a suspect and slammed him to the ground outside a midtown hotel. It’s not the first time Frascatore has been accused of using excessive force. We speak to Warren Diggs, a Queens man suing Frascatore for assault after he was stopped in 2013 for allegedly riding his bicycle on the sidewalk. Attorney Amy Rameau is representing Diggs and another New Yorker beaten by Frascatore.

AMY GOODMAN: This is Democracy Now!, democracynow.org, The War and Peace Report. I’m Amy Goodman, with Juan González. Our guests, Amy Rameau and Warren Diggs. Amy Rameau, you’ve just brought a lawsuit on behalf of Warren Diggs, and your partner, as well, is that right?

AMY GOODMAN: What happened to you both in January of 2013 as you were taken down by police officers when you rode your bicycle to your house. You filed a federal lawsuit as—

AMY GOODMAN: And tell us what that federal lawsuit is demanding.

AMY RAMEAU: Well, it’s demanding that the city—well, the city—see, this is part of the problem. The city always comes into these lawsuits to indemnify the officers who misbehave. And this is exactly what’s happening in the case of Mr. Frascatore. He doesn’t have to come out of his pockets to pay for what he did to my clients; the city is going to pay for it. OK? So, you know, when I—

AMY GOODMAN: Is it possible he will be arrested for assault?

WARREN DIGGS: He should, but I don’t think—

AMY RAMEAU: He should be arrested, because what he’s done to my client, what he did to Mr. Cline and to others, they’re all criminal acts. He really should be prosecuted for his criminal acts. He is a criminal in blue. That’s what he is. What he’s done, they’re crimes. But it’s really difficult, and it doesn’t happen often that the prosecutors prosecute police officers for misconduct. It happened in Queens not too long ago. A 16-year-old kid by the name of Kaheem Tribble was assaulted by two really bad cops, Tyrane Issac and David Afanador, two just horrible human beings. They pistol-whipped the kid. They could have killed him.

AMY GOODMAN: Tell us how they stopped him. This is your case?

AMY RAMEAU: Yeah, Kaheem happens to be a client of mine. He’s only 16. He’s just a kid. He’s tall, but he’s just a kid. They see him in the streets, and they start chasing him for no apparent reason. They chased him, and he was absolutely petrified. Right? So he ran. Eventually they caught up with him. He put his arms up. He put his hands up in surrender. Instead of, you know—they really had no reason for stopping him in the first place. But what happened, what followed, was just absolutely horrifying and captured on video. One of the officers punched him in the face. The other one—

AMY GOODMAN: Knocking his teeth out?

AMY RAMEAU: —came at him with a weapon and turned the weapon around and whacked him in the face with it, breaking a number of his teeth. And then they continued to punch him and punch him and punch him. All right? So, later, Internal Affairs gets involved in the case. They get involved in the case. They question the officers. The officers lied, of course. And then the video surfaces, right? The video surfaces. The client says, “Look, they pistol-whipped me. They broke my teeth.” You know?

AMY GOODMAN: Where did the video come from?

AMY RAMEAU: Well, a reporter with DNAinfo got the video. We tried to get the video. By the time we got to the bodega, the video was gone. Internal Affairs had already been there, and they’d taken the video. So the video really came from a police source.

JUAN GONZÁLEZ: So, in essence, then, they hid the evidence.

JUAN GONZÁLEZ: But then, it didn’t surface—

AMY RAMEAU: It didn’t surface until, you know—

JUAN GONZÁLEZ: —in the legal proceedings. It surfaced extralegally some other way.

AMY GOODMAN: And the police have been charged?

AMY RAMEAU: The officers, the two officers, yeah—you know, I should talk about this. David Afanador and Tyrane Issac were both indicted by the Kings County District Attorney’s Office for assaulting my client and official misconduct.

AMY RAMEAU: This happened late last year. This is something that doesn’t happen often. Prosecutors don’t often take it upon themselves to prosecute police officers for this type of misconduct, but it did happen in this case, in Kings County, that they’re currently—they’re currently being—they were indicted. And even after they were indicted, the PBA—right? The PBA came out defending these criminals, after they were caught on video assaulting a 16-year-old boy. It just goes to show you the PBA, their function, their primary function, seems to be to defend police officers even when they’re caught committing gross misconduct, even when they’re caught committing criminal acts, violent criminal acts.

JUAN GONZÁLEZ: And, of course, now, as Patrick Lynch is saying, just because you have a video doesn’t mean—

AMY RAMEAU: Yeah, a video, so what? You have a video. That’s his position now.

WARREN DIGGS: What a scumbag.

AMY RAMEAU: So what if you have a video?

AMY RAMEAU: You know, that doesn’t mean anything.

AMY GOODMAN: What is the lesson to you, as we wrap up, Warren Diggs, with the video surfacing of James Blake being attacked by the same officer who attacked you, and the mayor, the police commissioner apologizing to him? How does it make you feel?

AMY GOODMAN: This is Jamaica, Queens?

WARREN DIGGS: And so, I guess my jewel I get out of this is, I’m keeping my camera phone handy, because my case was two years ago, and if it wasn’t for that happening to this guy, it would still be in the dark.

AMY GOODMAN: And, Amy Rameau, the federal judge now has called an emergency session with you in dealing with the lawsuit?

AMY RAMEAU: The federal judge did call in an emergency conference on Friday, because of—

AMY RAMEAU: This past Friday. We already had the conference, because of what was happening in the media related to Mr. Frascatore.

AMY GOODMAN: And what does it mean?

AMY GOODMAN: Will this be resolved?

AMY RAMEAU: Yes, I believe it will be resolved.

AMY GOODMAN: I want to thank you so much for being with us, Amy Rameau and your client, Warren Diggs.

WARREN DIGGS: Thank you for having us.

AMY RAMEAU: Thank you for having us. 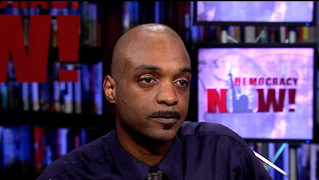