On the campaign trail, Republican candidates are proposing massive new tax cuts for the rich despite growing economic inequality across the country. On Monday, Donald Trump unveiled a plan to lower the income tax rate to the lowest level since 1931, cut corporate taxes and abolish the estate tax. Meanwhile, former Florida Governor Jeb Bush has proposed broad tax cuts for individuals and corporations as part of his economic plan. Under the plan, Bush himself would save millions of dollars in taxes. We speak to Robert Reich. He served as labor secretary under President Clinton and is a professor at the University of California, Berkeley. His newest book is “Saving Capitalism: For the Many, Not the Few.”

JUAN GONZÁLEZ: On the campaign trail, Republican candidates are proposing massive new tax cuts for the rich despite growing economic inequality across the country. On Monday, Donald Trump unveiled a plan to lower the income tax rate to the lowest level since 1931, cut corporate taxes and abolish the estate tax.

DONALD TRUMP: If you’re single and earn less than $25,000, or married and jointly earn less than $50,000, you will not pay any income tax. Nothing. This eliminates, very strongly and quickly, the marriage penalty, very unfair penalty. It eliminates the AMT, which is the alternative minimum tax. It ends the death tax. It’s a double taxation. A lot of families go through hell over the death tax. It reduces or eliminates most of the deductions and loopholes available to special interests and to the very rich.

AMY GOODMAN: Meanwhile, former Florida Governor Jeb Bush has proposed broad tax cuts for individuals and corporations as part of his economic plan. Under the plan, Jeb himself would save millions of dollars in taxes. He was questioned about this on Fox News Sunday by Chris Wallace.

JEB BUSH: Look, the benefit of this goes disproportionately to the middle class. If you look at what the middle class pays today, compared to what they would in our tax plan—

CHRIS WALLACE: But they get a 2.9 percent increase in after-tax income.

JEB BUSH: Because higher-income people pay more taxes right now. And proportionally—everybody will get a benefit, but proportionally they’ll pay more in—with my plan than what they pay today.

JEB BUSH: The simple fact is, 1 percent of people pay 40 percent of all the taxes. And so, of course, tax cuts for everybody is going to generate more for people that are paying a lot more. I mean, that’s just the way it is.

JUAN GONZÁLEZ: While the Republicans are pushing for tax cuts to the rich, many others are questioning how the economic system is working. Senator Bernie Sanders, a self-identified socialist, has soared in the early polls for the Democratic primary. In Britain, socialist Jeremy Corbyn has just been elected the leader of the Labour Party. And Pope Francis has critiqued the modern capitalist system as, quote, “a new tyranny.”

AMY GOODMAN: To talk more about the economy, we’re joined by Robert Reich. He served as secretary of labor under President Clinton, is professor at the University of California, Berkeley. His latest book is Saving Capitalism: For the Many, Not the Few.

AMY GOODMAN: It’s great to have you with us. Start off with Trump. What’s your—he said he is there for—to, you know, tax the hedge fund guys, but then he lays out his tax plan.

ROBERT REICH: In fact, his tax plan will certainly keep the hedge fund guys as well-off as they are right now, if not doing better, including private estate people and everybody else. The Trump tax plan cuts the top rate from nearly 40 percent down to about 25 percent. It is a huge windfall for those at the top. And there is no indication of how it’s going to be paid for. I mean, all these Republicans, all they do is do exactly what started under Ronald Reagan, and that is, they say, “Trickle-down economics. Everybody benefits.” The fact of the matter is, nothing ever trickles down.

JUAN GONZÁLEZ: But what about his claim that folks at the lower end of the income spectrum will end up paying virtually no tax?

AMY GOODMAN: And what about Jeb Bush?

ROBERT REICH: Jeb Bush’s plan is just about the same. It’s not quite as audacious and quite as irresponsible as Trump, but then that’s not saying very much. It also gives huge tax breaks to people at the top. In fact, one analysis I read yesterday showed that the Bush tax plan, Jeb Bush tax plan, provides about $1.4 million a year to the top income earners. This is at a time, let’s remember, when inequality is wider today than it’s been in the United States at least since 1927, and by some measures since 1880. I mean, why Republicans think it’s necessary to provide even more tax breaks for the wealthy is beyond me. And that only means less money for everything from national defense to Medicare to the little bit we’re now paying for the poor. 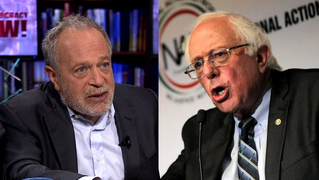