“A Shameful Moment for This Country”: Report Back on Militarized Police Raid of DAPL Resistance Camp

We go to Standing Rock, North Dakota, for an update on how hundreds of police with military equipment raided a resistance camp Thursday that was established by Native American water protectors in the path of the proposed $3.8 billion Dakota Access pipeline. More than 100 officers in riot gear with automatic rifles lined up across a highway, flanked by multiple MRAPs, an LRAD sound cannon, Humvees driven by National Guardsmen, an armored police truck and a bulldozer. Water protectors say police deployed tear gas, mace, pepper spray and flash-bang grenades and bean bag rounds against the Native Americans and shot rubber bullets at their horses. “We learned a lot about the relationship of North Dakota to Native people,” says Tara Houska, national campaigns director for Honor the Earth. “I was standing next to a group of teenagers that were all maced in the face. … Myself, I actually was almost shot in the face by bean bag round.”

JUAN GONZÁLEZ: We turn now to North Dakota, where on Thursday hundreds of police with military equipment raided a resistance camp established by Native American water protectors in the path of the proposed $3.8 billion Dakota Access pipeline, which has faced months of resistance from the Standing Rock Sioux Tribe and members of hundreds of other tribes from across the Americas. On Thursday afternoon, over a hundred officers in riot gear with automatic rifles lined up across North Dakota’s Highway 1806, flanked by multiple MRAPs—that’s mine-resistant ambush protected military vehicles—sound cannon, Humvees driven by National Guardsmen, an armored police truck and a bulldozer. Water protectors say that police deployed tear gas, mace, pepper spray and flash-bang grenades and bean bag rounds against the Native Americans and shot rubber bullets at their horses. This is a video shot by Unicorn Riot, followed by a Facebook Live video from Sacheen Seitcham of the West Coast Women Warriors Media Cooperative.

AMY GOODMAN: Water protectors set up a blockade of the highway using cars, tires, fire in order to try to protect their camp, parts of which were demolished by police. Four people locked themselves to a truck parked in the middle of the highway in order to stop the police advance. Elders also led prayer ceremonies in front of the police line. Some were arrested in the middle of prayer. In total, more than 100 people were arrested. Ahead of the police raid, the Federal Aviation Administration also issued a temporary no-fly zone for the airspace above the resistance camps for all aircraft except for those used by law enforcement. Police appeared to be evicting the frontline camp in order to clear the way for the Dakota Access pipeline company to continue construction. Company cranes and bulldozers were active Thursday just behind the police line on the site of the sacred burial ground where Dakota Access security guards unleashed dogs on Native Americans on September 3rd. We’re going to turn to Dallas Goldtooth of the Indigenous Environmental Network, this clip from the front line.

DALLAS GOLDTOOTH: This is at the front line of the Dakota Access pipeline fight right here. And we are about one—about two miles from the river to the west here—or east, sorry. And to the west, right over this hill, Dakota Access is doing construction, trying to get to this road right here. So there is a police line on top of the hill here with Dakota Access workers and police protecting the workers.

AMY GOODMAN: That’s Dallas Goldtooth. And before that, you hear the LRAD, the long-range acoustic device.

Welcome back to Democracy Now!, Tara. Explain what took place yesterday, I mean, the video and the photos that we have of the military hardware, a raid against the protesters.

Yesterday, we saw folks being maced. I was standing right next to a group of teenagers that were all maced in the face, maced right—like all kinds of people. Myself, I actually was almost shot in the face by bean bag round. It ricocheted off a truck right next to my head. These police were actively trying to hurt people, pushing them back to allow construction of the Dakota Access pipeline. They were defending monetary interests as human beings were being physically hurt. You know, I saw—I saw, right in front of me, a group of police officers pull a protester forward and begin beating him over the head with sticks. There’s video of it that you can see. I mean, this was an all-out war that was waged on indigenous protectors that were doing nothing more than peacefully assembling. There was no fires, there was nothing like that, until the police began their violent attack on us.

JUAN GONZÁLEZ: And, Tara, where was this incident in—for instance, in relationship to the September 3rd dog attacks at the tribal burial site?

TARA HOUSKA: When Dakota Access jumped ahead over 20 miles to destroy the site that had just been identified by the tribe the day before as a sacred place, that happened on September 3rd. That’s also the anniversary of the Whitestone Hill massacre. That was the exact place the day that Dakota Access was basically constructing its pipeline, right in the background, as literally hundreds and hundreds of people came to stand and pray and bring all of their energy forward to stop this from happening. And it was right at that site where Native American men, women and children had been attacked by private security, by dogs and mace and all the same things that we saw yesterday—this incredible escalated violence against people that were doing nothing more than trying to stop the destruction of sacred sites right in front of their eyes.

TARA HOUSKA: Yes, there were police walking around everywhere with assault rifles. Directly across from us, there was actually a policeman holding his rifle trained on us, directly on us. Bean bag rifle assault—bean bag non-lethal weapons were also aimed at us. Every time we put our hands up, they’d put them down. As soon as our hands came down, they would aim back at us. Police officers were smiling at us as they were doing these things. There were police officers filming this, laughing, as they—as human beings were being attacked, being maced. I mean, it was a nightmarish scene. And it should be a shame to the federal government, it should be a shame to the American people, that this is happening within U.S. borders to indigenous people and to our allies, to all people that are trying to protect water. Yesterday was a really shameful moment for this country and where we stand.

AMY GOODMAN: And the number of people you estimate were arrested, Tara?

TARA HOUSKA: I saw dozens of people being arrested. I mean, they were just pulling people out and arresting them. You know, I saw—I actually had to get pulled back from a group that—I mean, the police were pushing forward and just grabbing people at will. We had a number of lockdowns, like that were right in front of us in this truck in the middle of the road, that was used to attempt to blockade these police from advancing forward. There were five people, actually, that were locked to that. They attempted to construct a tipi in the middle, right behind people that were praying and singing. And they—there were folks that locked down to that tipi, or attempted to. The police ripped that tipi down and ripped those people out. It was—it was a really horrible scene yesterday. 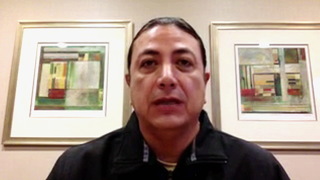