Allan Nairn: Regardless of Who Wins in November, U.S. Wars & Aggression Will Continue

Vice-presidential candidates Virginia Senator Tim Kaine and Indiana Governor Mike Pence squared off Tuesday night in the only vice-presidential debate, where they discussed everything from Donald Trump’s tax history to their running mates’ foreign policy platforms. Democracy Now! expanded the debate by giving Green Party vice-presidential candidate Ajamu Baraka a chance to respond to the same questions posed to Democrat Tim Kaine and Republican Mike Pence. After the debate, Democracy Now! hosted a roundtable of guests, including prize-winning investigative journalist Allan Nairn, who gave his response to the three candidates’ answers.

AMY GOODMAN: After the debate, I spoke to prize-winning investigative journalist Allan Nairn for his response.

ALLAN NAIRN: On the one hand, the debate didn’t really convey the gravity of the threat of Trump. The fact that an all but open white supremacist and proto-fascist has a chance to take over the U.S. executive branch and free up the Paul Ryan agenda in Congress and an ultra-right agenda from the Supreme Court, that didn’t fully come through. However, I think there were some very important factual points that came out of it.

One was that I think Pence succeeded in exploding the idea that some people have that Trump—a Trump presidency would somehow be less lethal than a Democratic presidency. I mean, to begin with, both parties, the Democrats and the Republicans, are lawless. They’re willing to violate the domestic murder laws of every country in the world. They’re willing to violate international law. They’re willing to violate aggression—to commit aggression. They’re willing to continue the U.S. policy of trying to run—run the world. And it’s the case that, whoever gets elected, U.S. behavior overseas is likely to be even worse than it is now, in that Clinton is even somewhat more aggressive than Obama has been. But there’s been this notion around that Trump would somehow pull back from that. Pence made it clear: absolutely not. Trump has already, in essence, promised a new war with Iran, when he, one, promises to void the Iran nuclear deal; two, says he’ll sink Iranian ships if they taunt American sailors.

There’s the added dimension, which they didn’t talk about tonight, but which becomes even more menacing when you put it in this context, of the Trump policy of a return to the old U.S. policy of conquest for resources, like what the U.S. did with Iran in '53 with the coup to secure the oil for the Western interests, what they did with Guatemala in ’54, called in by the United Fruit Company to put the military in power and begin a mass slaughter there. Trump says, “Go in and take the oil.” Well, that has implications for many countries, especially for Venezuela. The next president is going to face inevitable confrontations with North Korea over nuclear weapons and with Venezuela, where the government is on the verge of collapse. Venezuela has the world's number one oil reserves, even greater than those of Iran, Iraq, Libya and Saudi Arabia. With the Trump principle of “take the oil,” the outlook is even more ominous for a place like Venezuela than it would be under a Clinton administration. 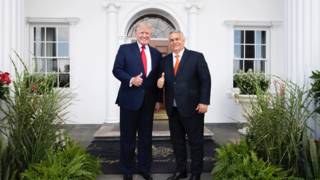