Saturday marks the 25th anniversary of the Santa Cruz massacre on November 12, 1991. Journalists Allan Nairn and Amy Goodman were there when Indonesian troops opened fire on a peaceful memorial procession at the Santa Cruz cemetery in Dili. The soldiers were armed with U.S. M16s and killed more than 270 East Timorese. We go to East Timor to speak with investigative journalist Allan Nairn, who has returned to the scene of the massacre, where young people re-enacted what occurred. “There was crying, but it was like a celebration of power,” Nairn notes, because the Timorese response to the attack sparked an international movement that led the U.S. to cut off military aid, and East Timor eventually won its independence. “People here are not underestimating their power. Americans, we shouldn’t underestimate ours, either.”

JUAN GONZÁLEZ: Saturday marks the 25th anniversary of the Santa Cruz massacre. It was November 12th, 1991, and journalists Allan Nairn and Amy Goodman were there when Indonesian troops opened fire on a peaceful memorial procession at the Santa Cruz cemetery in Dili.

AMY GOODMAN: The Indonesian military was armed with U.S. M16s. They killed more than 270 East Timorese on that day, November 12th, 1991. We’re going to go back to that day with the documentary Allan and I produced as we witnessed this massacre, called Massacre: The Story of East Timor.

JOSÉ RAMOS-HORTA: I lost one sister and two brothers.

EAST TIMORESE WOMAN: It was 10 days before I was to give birth. The army was shooting people, and they would die at our feet, but you couldn’t stop to help them.

JOSÉ RAMOS-HORTA: I know families that were totally wiped out.

ALLAN NAIRN: Hundreds and hundreds of troops coming straight at the Timorese.

AMY GOODMAN: When they came, they opened fire on the people.

PRESIDENT GEORGE H.W. BUSH: We pride ourselves, and I think properly so, in standing up for human rights.

PRESIDENT BILL CLINTON: I’m very concerned about what’s happened in East Timor. We have ignored it so far in ways that I think are unconscionable.

AMY GOODMAN: This is Democracy Now!, democracynow.org, The War and Peace Report. That was 25 years ago today, 271 people killed. We’re going right now to Dili. Allan Nairn is in Dili, East Timor, the capital. He just came from the cemetery where there was a re-enactment of the massacre.

Allan, we only have a few minutes. Can you tell us what people are saying 25 years later and what it’s like for you—you were wounded, your skull was fractured by the Indosian military—to return to the site?

ALLAN NAIRN: Well, it’s really something, because what they did tonight was—these were young people, many of whom were not born at the time of the massacre, or they were little kids. They played the part, the soldiers and the marchers, and they had studied their—their history. At the end of this pageant, it looked like it did on that day. That street, the actual street in front of the cemetery, was covered with bodies. But these bodies rose up. They started singing. People who were playing the soldiers came forward, they broke their guns. And the spirit was not solemn. It wasn’t mourning. There was crying, but it was like a celebration of power. People often make the mistake of underestimating their own power. That was not the atmosphere here. People were celebrating it, because what the Timorese actually did after the real Dili massacre was they sparked an international movement. In the U.S., we were able, through grassroots pressure, to get the Congress to cut off U.S. military aid to the Indonesian military one step at a time, and eventually ended the occupation of Timor. They won their independence.

It also brought down the dictator, Suharto, of Indonesia, because when the Indonesians themselves rose in rebellion against him in Jakarta in '98, he looked into the faces of those Indonesian protesters, and he imagined he saw the eyes of the Timorese. He was afraid, if he opened fire on the—on his own protesters, his remaining U.S. aid would be cut off. His security man told me later they specifically feared it would be another Santa Cruz, that they'd pay too heavy of a price, because the Timorese had already made them pay a price. So Suharto trembled, he hesitated, and he fell, because the people in Jakarta were emboldened. They kept coming out in the streets in waves, and they ended that dictatorship. And all this radiated from the actions of the East Timorese, who on that morning seemed like they were crushed. You know, I think the Indonesian generals, the poor generals, must have been thinking, “My god, what do we have to do to kill these people? They keep coming back and defeating us.”

AMY GOODMAN: Allan, we have 10 seconds.

ALLAN NAIRN: You know, a lot of people have been asking about Trump. They’re giving their condolences. People here are not underestimating their power. Americans, we shouldn’t underestimate ours, either. This could have—what happened in the U.S. radiated from the collapse of the American middle class. U.S. could have swung radically left with Sanders. It ended up swinging radically right with Trump, because the Democratic establishment has completely discredited itself. The party is ripe for takeover. This isn’t over in the U.S. It shouldn’t be.

AMY GOODMAN: Allan Nairn, we’re going to do Part 2 of this conversation after the broadcast. Thanks for joining us. Allan Nairn, speaking to us from Dili, East Timor. 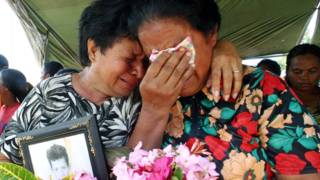