Donald Trump has chosen former Texas Governor Rick Perry to be energy secretary. Governor Perry famously attempted to propose to abolish the Energy Department—but then couldn’t even remember the agency during a live televised debate in 2011, when Perry was running for president. Perry has deep ties to the fossil fuel industry, including serving on the corporate boards of both Energy Transfer Partners and Sunoco Logistics, two companies behind the Dakota Access pipeline. Both companies are owned by Texas billionaire Kelcy Warren. Perry joined the board of Energy Transfer Partners in February 2015, only two weeks after he left office. That year, he received $365,000 from Warren’s companies. We speak to Forrest Wilder, editor-in-chief of The Texas Observer, and Kiah Collier, energy and environment reporter for The Texas Tribune.

AMY GOODMAN: This is Democracy Now!, democracynow.org, The War and Peace Report. I’m Amy Goodman. Donald Trump has chosen former Texas Governor Rick Perry to be energy secretary. Governor Perry famously attempted to propose to abolish the Energy Department—but then couldn’t remember the name of the agency during a live televised presidential debate in 2011.

GOV. RICK PERRY: It’s three agencies of government, when I get there, that are gone: Commerce, Education and the—what’s the third one there? Let’s see.

JOHN HARWOOD: But you can’t name the third one?

GOV. RICK PERRY: The third agency of government I would—

GOV. RICK PERRY: —I would do away with, the Education, the, uhhh, Commerce and, let’s see. I can’t.

AMY GOODMAN: That was Rick Perry during the televised presidential debate in 2011. He later told reporters the agency he had forgotten was the Energy Department.

Well, Governor Perry has deep ties to the fossil fuel industry, including serving on the corporate boards of both Energy Transfer Partners and Sunoco Logistics, two companies behind the Dakota Access pipeline. Both companies are owned by Texas billionaire Kelcy Warren. Perry joined the board of Energy Transfer Partners in February 2015, two weeks after he left office. That year, he received $365,000 from Warren’s companies. In 2015, Kelcy Warren also served as Rick Perry’s campaign finance chair during Perry’s presidential bid and donated $6 million to pro-Perry super PACs.

For more, we’re going to Austin, Texas. We’re joined by two guests. Forrest Wilder is editor-in-chief of The Texas Observer. And Kiah Collier is the energy and environment reporter for The Texas Tribune. Her recent article is headlined “Rick Perry’s energy legacy is more complicated than you think.”

We welcome you both to Democracy Now! Let’s start with Forrest Wilder. Your assessment of Rick Perry, the former governor of Texas, to be the head of—wait, what was the name of the department?—the Energy Department. Well, that’s what he couldn’t remember when he said he wanted to abolish it in 2011. Your thoughts on this pick, Forrest?

FORREST WILDER: Well, I think a lot of us were astonished. There’s been a lot of remarkable political news in the Trump transition, but picking the guy who forgot the department that he wanted to abolish is pretty incredible. I assume that Perry doesn’t now want to abolish the Energy Department that he’s now probably going to head.

I’m sort of scratching my head, I think, a little bit about what Trump sees in Rick Perry. As you noted, he has served on these corporate boards after his governorship, although—you know, it’s Texas, and the oil and gas business is huge here, and politicians often cash out when they leave office. He was governor of Texas, of course, for 14 years, the longest-serving governor in Texas history. But, you know, Rick Perry is not exactly a details guy. He’s not a policy guy. Though he was in office for a really long time, actually, his record of accomplishment, in terms of really big initiatives that he was responsible for, that you can certainly say that Rick Perry’s imprimatur was on this program or this policy, is actually really quite short. In fact, I was thinking back about what were his major proposals, and most of what I thought of were basically kind of pretty big failures. Some of them won’t be known outside of Texas, but here they were very big deals. For example, the Trans-Texas Corridor was this proposal to build this very expensive network of toll roads and highways that involved public-private partnerships. It was basically to help facilitate trade.

AMY GOODMAN: Forrest, I’m going to interrupt, because I want to give Kiah a chance to respond.

AMY GOODMAN: And then we’re going to continue this discussion and post it online. Kiah Collier, if you could talk about Rick Perry’s close ties to Kelcy Warren, certainly the center of a massive national controversy around the Dakota Access pipeline?

KIAH COLLIER: Right. Perry, I think, has been pretty close to Warren both personally and professionally for a long time. Kelcy Warren has given him a ton of money, a ton of political support. And when he stepped down as Texas governor in 2015, he was shortly thereafter appointed to the board of Energy Transfer Partners. So, you know, we explored those kind of conflicts of interest, I guess, in our piece. And experts told us, you know, he’s probably going to have to step down from his board position on Energy Transfer Partners if he is confirmed to head the Energy Department.

AMY GOODMAN: Well, we’re going to leave it there and then do Part 2 of this discussion and post it at democracynow.org. Kiah Collier of The Texas Tribune and Forrest Wilder of The Texas Observer, thank you so much for joining us. 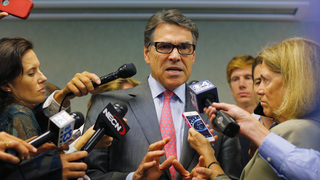