Expert on Trump Business Conflicts: “There are Hard Ethical Questions in Life. This Not One of Them”

Ethics experts say President-elect Donald Trump must divest from his businesses to avoid conflicts of interest. “There are hard ethical questions in life, and this is not one of them,” says Robert Weissman, president of Public Citizen, who has written that “Trump’s Conflicts of Interest are Unprecedented in American History.” Also with us in San Francisco is Aaron Glantz, senior reporter at Reveal from The Center for Investigative Reporting, where his latest investigation is headlined “Trump’s Indonesia hotel deals hint at his form of foreign relations.”

AMY GOODMAN: Ethics experts say Donald Trump must divest from his business interests to avoid conflicts of interest. Well, for more, we’re joined by two guests. In Washington, D.C., Robert Weissman is staying with us, president of Public Citizen, his recent piece, “Trump’s Conflicts of Interest are Unprecedented in American History.” And joining us from San Francisco, Aaron Glantz, senior reporter at Reveal from The Center for Investigative Reporting, where his latest investigation is headlined “Trump’s Indonesia hotel deals hint at his form of foreign relations.”

We welcome you both to Democracy Now! Robert Weissman, lay out your concerns.

ROBERT WEISSMAN: [inaudible] that is unprecedented in American history. And it’s plain enough that the president-elect doesn’t really care about it. He has a global business empire, a lot of properties and businesses in the United States, as we know from the campaign, involving everything from hotels to resorts to golf courses to shirts, ties, steaks and fake universities. But he’s also got properties either directly or licensed in about two dozen countries around the world. And he doesn’t show any sign of really separating himself from the business or his children from the business, notwithstanding the tweets that he put out a couple days ago.

So we’re looking at a president who’s going to have business interests in all kinds of policy decisions that he is going to face, involving everything from consumer protection to worker safety, workers’ rights to organize, terms for Wall Street reform, bankruptcy rules, tax law, and then especially the conduct of foreign policy, where the decisions he makes will have impact on the properties that he owns or is associated with around the world. We’re looking at entanglements that are just absolutely unprecedented and no sign of him trying to remove himself from being enmeshed in this disaster. It is part of the reason we say that we are now looking at what’s going to be the most corrupt administration in the history of the United States.

AMY GOODMAN: Members of Donald Trump’s incoming administration have had to defend the president-elect against criticism of the conflicts his business interests present. This is Fox News Sunday’s Mike Wallace questioning Vice President-elect Mike Pence.

MIKE WALLACE: If I may just ask a question, sir, briefly: If his kids are running the business, and if we’re talking about buildings here, if he doesn’t divest himself of the business—a lot of people are saying turn it into cash—he’s going to know who—what the—who the kids are doing business with. In fact, there was just a meeting in the last few days with some of his business partners from India. Doesn’t that create a tremendous danger of a conflict of interest?

VICE PRESIDENT-ELECT MIKE PENCE: Well, I can tell you, in a recent interview after the election, the president-elect summed up his view of his interest in his business life with two words. He said, “Who cares?”

AMY GOODMAN: “Who cares?” [Vice] President-elect Pence says. Well, we turn now to look at the president-elect’s potential conflicts of interest. Talk more about the significance of Pence saying, Robert Weismann, “Who cares?”

ROBERT WEISSMAN: Yeah, by the way, they’re not potential conflicts of interest, they’re not possible conflicts of interest, they’re not future conflicts of interest, it’s not the appearance of conflict of interest—they are conflicts of interest. And it will bedevil almost everything that he does as president. He has a hotel in Las Vegas, for example. There’s an ongoing labor dispute. The National Labor Relations Board says he ought to let his workers unionize, and he’s trying to fight it. OK, now he’s going to be boss of the NLRB, and he’s going to have a profound role in making decisions about labor law. He’s got a self-interest in the issue. He just was involved—obviously, settled recently the lawsuit involving his fake Trump University. Well, the reason that people who were victimized by Trump University were able to sue him is that there are consumer protections in this country, and they had a right to band together in a class action to sue the perpetrator of wrong against them. Well, now as president, he’s going to have a key role in deciding whether or not people have a right to join together in class actions and what the standards are of consumer protection. His biggest—his biggest lender is Deutsche Bank. Well, Deutsche Bank is involved in negotiations with the Justice Department now for the wrongs it did leading up to the financial crash. The Justice Department wants about $14 billion from Deutsche Bank, and the bank and the German government are fighting hard against that. Is that not going to be influenced by President Donald Trump? Well, the markets think it will be influenced, because Deutsche Bank’s stock went up 20 percent as soon as he was elected.

AMY GOODMAN: I want to turn to Aaron Glantz, who looked deeply into one story for Reveal, The Center for Investigative Reporting. Aaron, lay out what you found.

AARON GLANTZ: Well, the important thing for me, Amy, was that not only does Donald Trump have these vast business interests all over the world, but he was expanding them even as he was running for president. So, we looked at his business interests in Indonesia, because he signed deals for two different resort complexes in Indonesia, one in West Java and another in Bali, while he was running for president in August and September of 2015. And we looked especially at his business partner, who goes by Hary Tanoe in Indonesia, who’s a very controversial oligarch and media mogul, much like Donald Trump, a politically motivated person who ran for vice president of Indonesia on a ticket with General Wiranto, who is a—indicted for war crimes by a U.N. tribunal. He has a wife who owns a beauty pageant. He owns many media properties and is a purveyor of reality television. This is the person that Donald Trump went into business with for two resorts, after he had already declared that he was running for president of the United States.

AMY GOODMAN: Very interesting, because he was also very much a supporter of Prabowo, who ran for president in 2014, responsible for mass killings, who said he thought about becoming a fascist dictator, but ultimately was defeated. He was supported by Donald Trump’s Indonesian business partner.

AARON GLANTZ: Well, these are his friends. Right? That’s how I look at it. I mean, people like Robert Weissman are going to be asking what are the conflicts of interest that he faced, and noting the conflicts, like unionization of his hotels. In the foreign policy arena, I ask: Who are his friends? If there’s a crisis in Southeast Asia, who does Donald Trump know? Who is he going to pick up the phone and call? And the people all around the world that Donald Trump knows, that he would call in the event of a crisis, are the people who build his resorts, his hotels. And he was actively expanding these businesses, making these contacts both during the campaign and in the years leading up to the campaign. And so, examining who those people are tells us a lot about the kind of decisions he might make in a moment of international crisis.

AMY GOODMAN: Can you talk about Hary Tanoe? Well, he quickly tweeted his congratulations to his business partner, Donald Trump, November 9th. And also, he, too, a real admirer of the Russian president, Vladimir Putin. Why does this matter?

AARON GLANTZ: I think it matters because it gives us a sense—for people who are concerned about social justice, economic rights, war and peace, when you know that there’s somebody on the other end of the phone—you know, we know our president-elect is an admirer of Vladimir Putin, who is no friend of human rights, when we know that his business partners around the world share the same views, when we know that his business partners around the world are, you know, facilitating perhaps corruption. I mean, one other thing that we reported in our story was this very bizarre moment on the campaign trail at Trump Tower in September 2015 when Donald Trump walks off the stage of the podium and goes and grabs the speaker of the Indonesian Parliament, Setya Novanto, and declares that he’s a great man who’s going to do great things for America. And then, shortly after that, the speaker, Mr. Setya, is involved in a massive corruption scandal involving a mining company, where he was caught on tape demanding a 20 percent stake in the company—basically, a $4 billion kickback—and then resigned in disgrace, and, actually, recently is now back as the speaker of the Indonesian Parliament. To have a president who either is not aware of these massive corruption scandals overseas or simply doesn’t care, because it aligns well with his business interest, is something that Americans should be concerned about. 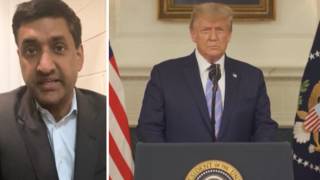