In Utah, more than 100 protesters disrupted a federal auction of oil and gas leases, spontaneously bursting into song until they were forced to leave. Author and activist Terry Tempest Williams, registered as Bidder 19, successfully bought rights to 1,750 acres of land to spare it from fossil fuel extraction. When asked by a Bureau of Land Management official if she was making a “legitimate bid for energy development,” Tempest Williams said: “You can’t define what energy is for us. Our energy development is fueling a movement.” Terry Tempest Williams joins us from Salt Lake City.

StoryJan 19, 2023“Out of the Lab and Into the Streets”: Meet Earth Scientist Fired After Engaging in Climate Protests

AMY GOODMAN: We turn now to Utah, where more than a hundred protesters disrupted a federal auction of oil and gas leases Tuesday, spontaneously bursting into song until they were forced to leave. This was the scene at the Salt Palace Convention Center in Salt Lake City.

AMY GOODMAN: The protesters, from a coalition of environmental groups that included Canyon Country Rising Tide, Elders Rising, the Sierra Club, called for an end to fossil fuel development on public lands as part of the Keep It in the Ground movement. Noted Utah author and activist Terry Tempest Williams attended the auction in support of the groups. She registered as Bidder 19, a move that raised suspicion among federal officials, who warned that she could be arrested if she misrepresented herself. She successfully ended up buying rights to over 1,700 acres of land to spare it from fossil fuel extraction. Climate activist Tim DeChristopher spent close to two years in prison when he posed as a bidder in a similar move in 2008.

To talk about what happened next, we’re joined by, well, Terry Tempest Williams herself in Salt Lake City.

Welcome to Democracy Now!, Terry. It’s great to have you with us. Explain what took place and what it meant to be Bidder 19.

TERRY TEMPEST WILLIAMS: First of all, it’s great to be on your show, Amy. Thank you for all you do.

As you mentioned, I was there with over a hundred other protesters in Salt Lake City, part of the movement to keep it in the ground. What was it like to be Bidder 19? I can tell you I don’t have the courage of Bidder 70. But I think each of us, in our own way, can both enter the open space of democracy. And I think what was interesting was to see the protesters and the impact that they had on the auction. They did disrupt the auction, through singing.

AMY GOODMAN: Now, Terry, just to stay—take a step back—and Bidder 70 was Tim DeChristopher, who ended up in prison for close to two years. But for a lot of people, us city dwellers, we don’t even understand what these auctions are.

AMY GOODMAN: So explain what it is that you went into, that the protesters disrupted, and that you ended up being a very large landowner or leaser in by the time you walked out.

TERRY TEMPEST WILLIAMS: Utah is 63 percent public lands. Half of the remaining fossil fuels in this country exist below our public lands, America’s public lands. Every so often, the Bureau of Land Management conducts an oil and gas lease that is open for bid. These lands go up for lease auction, that gives the highest bidder the opportunity to speculate, to drill for oil and make an enormous profit, as we know.

It’s a secret society, and I think that was the thing that was so stunning, sitting there as Bidder 70. It’s oil and gas companies. It’s very secretive. If you talk to them, they won’t tell you who they’re representing.

And then the auctioneer begins. A parcel is shown. It may be—in our case, it was 800 acres, and the bidding begins at two dollars an acre. And I think the thing that was so heartbreaking for me and shocking is you hear these lands go up, and they’re commodities, they’re a piece of meat. They’re our public lands. And one of the auctioneers—the auctioneer said, you know, “$2? Anybody want $2? $2.25? $2.50? Anybody want $2.50? $3?” And then he says, “Come on, men. This is a lot of scenery going to waste. $3? Anyone going to $3? $3.25?” And at that point, it becomes very emotional for me, because as one who has loved public lands, for those of us who see them as the public commons, to be thrown into the public auction—that is not public at all, but a secret society for oil and gas companies—is disheartening, to say the least.

AMY GOODMAN: Explain what they do with this land, when they do bid on it and get it.

TERRY TEMPEST WILLIAMS: Well, we’ll find out. You’re given this lease for 10 years. And through good faith and by compliance to the law, you’re expected to develop this land and produce oil or gas or fracking or coal.

When the agents saw that I was there, it was a process of intense intimidation, saying, “If you’ve misrepresented yourself, you will go to prison. Are you aware of this? And if you are not a legitimate energy development company, then you’re misrepresenting yourself.” And I said, “But I’m an American citizen. Don’t I have the right to be in this 'public' auction?” And he said, “I’m just saying, are you aware of what you have signed, and if you’re misrepresenting yourself, you will go to prison.” At that point, Agent Love, who was at Tim DeChristopher’s trial, said, “Terry, we don’t want you to get into trouble.” And I said, “I am within my rights. This is a legal act. I can be here at this public auction. Correct?” And he said, “Correct.” And I bore witness and held that space, with the other protesters until they were asked to leave because of singing.

AMY GOODMAN: Explain what property you got, this 1,700 acres that you bid on and won.

TERRY TEMPEST WILLIAMS: It’s so interesting, Amy, to actually participate in the process, and I can’t tell you what I’ve learned. Any United States citizen 18 years or older with a credit card and a driver’s license can purchase our public lands in a fire sale for $1.50 an acre. So, Brooke, my husband, we went into the BLM office with a broker, who in our case happened to be David Terry, who was director of the School Trust Lands. And we sat down. We got out maps. We looked at the parcels that were remaining. There were 25 parcels remaining, in a fire sale. And Brooke and I chose to purchase an oil and gas lease on 800 acres in Grand County, where we live, just outside of Castle Valley. It’s approximately 14 miles northeast of Arches National Park. And I just think it’s stunning to realize that in our centennial year celebrating our national parks, our public lands, America’s public lands, are being sold for $1.50 an acre to—on sale.

So, we were excited about exploring the energy on these 800 acres. There are white-tailed prairie dogs and Gunnison’s prairie dogs, which I happen to care enormously about, ferruginous hawks, pronghorn habitat, migratory flyway, sage, rabbitbrush. So we’re so excited to explore and see what kind of energy development, including the development of the movement, can create. We intend on complying with the law, and we have this lease for 10 years. And we have created an LLC, Tempest Exploration, and we’re excited to have many of our students in the environmental humanities program at the University of Utah be part of our board of directors.

AMY GOODMAN: As Terry Tempest Williams redefines energy, well, last month, Utah Congressman Rob Bishop and Congressmember Jason Chaffetz, both Republicans, released a draft public lands bill that, if passed, would affect 18 million acres of public lands in eastern Utah. Critics say the measure would create new oil and gas drilling zones that are exempted from environmental protections and hand over large areas of national park lands to private and state control. In a statement issued after releasing the bill, Congressman Bishop said, quote, “Our goal has always stayed constant. We will conserve areas worthy of conservation. We will guarantee outdoor recreation for all Utahns. We will enhance economic development to fund Utah schools and create good jobs. We will provide certainty by ending the litigation and mindless debates. That certainty will allow everyone to plan for the future without outside groups imposing their misguided will,” unquote. Terry Tempest Williams, what’s your response to the legislation?

TERRY TEMPEST WILLIAMS: It’s a fraud. And what’s so ironic is, an American citizen, you know, can apply to—

AMY GOODMAN: Whoops, it looks like we have just lost Terry Tempest Williams. We’ll try to get her back. We’ll go to break for the moment. Terry Tempest Williams is the famous author, who became, oh, Bidder 19 this week. She’s the author of more than a dozen books on environmental issues and a professor of environmental humanities at the University of Utah. Her latest book is When Women Were Birds. This is Democracy Now! We’ll be back in a minute.

AMY GOODMAN: “No More Auction Block for Me,” Sweet Honey in the Rock. This is Democracy Now!, democracynow.org, The War and Peace Report. I’m Amy Goodman. It looks like Terry Tempest Williams in Salt Lake City will not be reconnected by satellite, as we move on to our next segment. 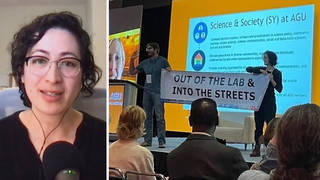