A shocking new investigation about private prisons has revealed dozens of men have died in disturbing circumstances inside these facilities in recent years. We continue our conversation with journalist Seth Freed Wessler, who spent more than two years fighting in and out of court to obtain more than 9,000 pages of medical records that private prison contractors had submitted to the Bureau of Prisons.

StoryFeb 09, 2016“This Man Will Almost Certainly Die”: The Secret Deaths of Dozens at Privatized Immigrant-Only Jails

AMY GOODMAN: This is Democracy Now!, democracynow.org, The War and Peace Report. I’m Amy Goodman, with Juan González. Our guest for Part 2 of our conversation is Seth Freed Wessler, who has spent two years now investigating private immigrant prisons. Did you know they exist? We’re not talking about immigration detention facilities, which are also jails and prisons, but we’re talking about this, within the Bureau of Prisons. His piece is called “This Man Will Almost Certainly Die.” Dozens of men have died in disturbing circumstances in privatized, immigrant-only prisons. The Bureau of Prisons itself says there’s a problem, yet the privatization scheme continues.

Seth, you start off with Claudio Fagardo-Saucedo. You told us his story in the show, a man who would die after being in this prison. Tell us other stories that you discovered.

SETH FREED WESSLER: Yeah, these files that I obtained through the open records request are striking, because they tell the stories of the final months and weeks in the lives of 103 men who died inside of these prisons.

We heard in the show Russell Amaru, the physician’s assistant, describe the care that a man named Nestor Garay did not receive. This is a man who I write about in my story in The Nation and who is covered in this episode of Reveal from the Investigative—from the Center for Investigative Reporting, a podcast. And Nestor Garay, one night at about 1:30 in the morning, his cellmates, nine of them, in a small cell in Big Spring, Texas, in a private prison in Big Spring, Texas, heard him moaning, pained moans coming from the top bunk. And they called for help from a guard, and the guard came and saw that he was not responding and that—the fellow prisoners were reporting that he had had a seizure.

So, the guard called for medical backup. And the man who arrived was a licensed vocational nurse, or a licensed practical nurse, who has about a year of training and who was the only person working in the medical unit that night at the prison. He called Russell Amaru, the physician’s assistant, and according to Amaru, he simply didn’t have the knowledge, the medical knowledge, to know what he was seeing in front of him. His skills weren’t up to responding to a major medical emergency.

And so, instead of sending him to the emergency room, which is what every doctor who read this file said should have happened absolutely and immediately, he was brought back to a different cell and left on the ground until morning, by which point his face was drooping, and it was clear that he had had a stroke. By the time he finally got to the hospital, where he could be treated—seven hours later, at least—the neurologist who saw him, who I interviewed in the hospital, told me it was too late, that the time to respond would have been when the prisoners asked for help. In fact, the prisoners said, “Send this man to the hospital.” But the prison didn’t do that.

JUAN GONZÁLEZ: I wanted to ask you about the epic battle you had to get these records. How—what kind of resistance did you come up across? And when you say 103 deaths, what period of time are we talking about here?

SETH FREED WESSLER: So, I had filed an open records request, a Freedom of Information Act request, several years ago. And I thought that I was going to get documents from that request. I talked to people in the BOP’s FOIA office, and it seemed that it was moving. But a year passed and then two, and I realized that I wasn’t going to get any of these documents. I had asked for the medical records of people who had died. It took filing a lawsuit in federal court to compel the federal government to compel the Bureau of Prisons to move. And last year, I started to receive these files—which were later unredacted, in significant part—that told the stories of men who had died. The files also included the internal investigations and death reports for each of these men who died. And in many cases, the prisons themselves, the private contractors themselves, acknowledged in these reports that there had been failings.

In one case, the prison company, Management and Training Corporation, contracted to have a after-action report conducted, in anticipation of litigation. That litigation never happened. In fact, this family didn’t know that their—the mother, who’s in Mexico, didn’t know that her son had died for nearly a year. And when I called her, when I found her and I talked to her, she still didn’t know that her son had been locked up for illegal re-entry. That is, she said to me, “I thought he had done something terrible to land in a federal prison in the United States.” But, in fact, I told her why he was locked up.

This is a man who arrived at the prison very rapidly. It was very clear that he was entering into a state of real distress, hallucinating. He said that voices—he was hearing voices that told him to break a window. And he received no substantive mental healthcare, and then he killed himself in this prison, even after he wrote on an intake form that he had been taking drugs for mental illness, that he had committed—attempted suicide in the past, and a medical—a low-level provider saw that he had tried to cut himself previously.

JUAN GONZÁLEZ: And isn’t, in effect, part of the reason why this has continued is that precisely because they are noncitizens, and their family members are probably not even in the country—I mean, that there’s no possibility of a lawsuit occurring—

JUAN GONZÁLEZ: —to make those responsible pay for what they’ve done?

SETH FREED WESSLER: I mean, prisons, in general, are very difficult places for journalists to access and very difficult places for families to reach. You know, we hear stories all the time about how difficult it is for families to visit their loved ones in faraway jails and prisons. But these families are sort of doubly cut off, because their relatives are both locked up and on the other side of a border, or, if they’re in the United States, very often their loved ones don’t speak—the family members don’t speak English. And so, there are incredible barriers to access. So these men really do disappear kind of twice into this system. And so, when these deaths happen, they happen silently. And so this story is an attempt to tell some of these stories of men who died in a system that—as I said in the show, are held in prisons that are held to different standards, lower standards.

JUAN GONZÁLEZ: And where are these prisons?

SETH FREED WESSLER: The prisons are all over the country, but four of them right now are in Texas. Two are in Georgia, one in Mississippi, one in California and several others in other parts of the country. There was another, a fifth prison in Texas, but last year it was shut down, because prisoners in that facility—and I reported on this for The Nation last year—prisoners in that facility began a protest over medical conditions and other issues. That protest exploded into a riot after prison officials used tear gas and rubber bullets to break up the protest. And the prison was destroyed. The federal government called it uninhabitable. So, it took, in that case, a riot, actually, to shrink the number of beds in the system.

AMY GOODMAN: And how many men and women are held in these prisons?

SETH FREED WESSLER: These prisons are actually only men. Women who are noncitizens are mainstreamed into the regular Bureau of Prisons systems. There are now 23,000 men in this subsystem, this separate subsystem of federal prisons.

SEN. BERNIE SANDERS: As a first step, we need to start treating prisoners like human beings. Private companies, private corporations should not be profiteering from their incarceration.

“Corrections Corporation of America and the Geo Group could both see their fortunes turning if there are fewer people to lock up in the future. …

“Clinton and other candidates revealed a number of lobbyists who are serving as 'bundlers' for their campaigns. Bundlers collect contributions on behalf of a campaign, and are often rewarded with special favors, such as access to the candidate.

“Richard Sullivan, of the lobbying firm Capitol Counsel, is a bundler [for] the Clinton campaign, bringing in [like more than $44,000 in a few months. He] is also a registered lobbyist for [the] Geo Group, a company that operates a number of jails, including immigrant detention centers, for profit.”

That was Lee Fang’s report from The Intercept. So, how this all relates to Republican and Democratic politics?

SETH FREED WESSLER: Well, what’s clear is that the president, whatever administration has power—is in power, has the power to decide whether the Federal Bureau of Prisons is going to continue to contract prisons. These prisons, a number of groups are calling for a roll-down of contracting. And as the federal prison system begins to shrink for the first time, the population of federal prisons is—prisoners is beginning to fall, there are real questions about whether beds will start to be pulled out of that system. And some people argue that the first beds to go should be these contract facilities that operate under separate rules, under separate standards and under lesser rules and standards.

AMY GOODMAN: Well, we want to thank you for being with us, Seth Freed Wessler, reporter with The Investigative Fund. We’ll link to your piece, “This Man Will Almost Certainly Die.” Thanks so much for being with us.

AMY GOODMAN: This is Democracy Now!, democracynow.org, The War and Peace Report. I’m Amy Goodman, with Juan González. Thanks for joining us.

“This Man Will Almost Certainly Die”: The Secret Deaths of Dozens at Privatized Immigrant-Only Jails 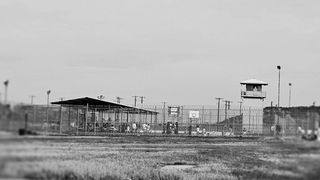 “This Man Will Almost Certainly Die”: The Secret Deaths of Dozens at Privatized Immigrant-Only Jails