Former GOP Congressmember Mickey Edwards: We Don’t Have Democracy in Our Political System

In what’s being billed as Super Tuesday 3, Democratic and Republican voters head to the polls today for primaries and caucuses in Florida, Illinois, Missouri, North Carolina, Ohio and the commonwealth of the Northern Mariana Islands. In the Republican race, all eyes will be on Ohio and Florida. Can Ohio Governor John Kasich or Florida Senator Marco Rubio pull off a victory in their home states, or will Donald Trump move closer to securing the Republican nomination? Can Bernie Sanders pull off one or more upsets like he did a week ago in Michigan? Polls show Clinton and Sanders locked in close races in Ohio, Illinois and Missouri. But how democratic is our system of voting? We speak to former Republican Oklahoma Congressmember Mickey Edwards, author of “The Parties Versus the People: How to Turn Republicans and Democrats into Americans.”

AMY GOODMAN: In what’s being billed Super Tuesday 3, Democratic and Republican voters head to the polls today for primaries and caucuses in Florida, Illinois, Missouri, North Carolina and Ohio. In the Republican race, all eyes will be on Ohio and Florida. Can Ohio Governor John Kasich or Florida Senator Marco Rubio pull off a victory in their home states, or with Donald Trump move closer to securing the Republican nomination? In the Democratic race, can Bernie Sanders pull off more upsets like he did last week in Michigan? Polls show Hillary Clinton and Sanders locked in close races in Ohio, Illinois and Missouri.

Meanwhile, a political battle is playing out in Washington as the Republican-controlled Congress and Obama’s White House are locked in a battle over the Supreme Court. Obama is expected to nominate a replacement for Justice Antonin Scalia as soon as this week, but Republican lawmakers said they will not hold hearings to consider any nominations put forth by President Obama. This comes as a new Gallup poll says only 13 percent of Americans approve of Congress’s performance. Both parties blame each other for the increasing partisan divide. Former Louisiana Governor Bobby Jindal recently blamed Obama for the rise of Trump. Jindal wrote, quote, “There would be no Donald Trump, dominating the political scene today if it were not for President Obama.” Speaking at the Rose Garden last Thursday, President Obama said Republicans themselves are to blame for Trump.

PRESIDENT BARACK OBAMA: Objectively, it’s fair to say that the Republican political elites and many of the information outlets—social media, news outlets, talk radio, television stations—have been feeding the Republican base for the last seven years a notion that everything I do is to be opposed; that cooperation or compromise somehow is a betrayal; that maximalist, absolutist positions on issues are politically advantageous; that there is a them out there and an us, and them are the folks who are causing whatever problems you’re experiencing. And so, what you’re seeing within the Republican Party is, to some degree, all those efforts over a course of time creating an environment where somebody like a Donald Trump can thrive. You know, he’s just doing more of what has been done for the last seven-and-a-half years. And in fact, in terms of his positions on a whole range of issues, they’re not very different from any of the other candidates.

AMY GOODMAN: Meanwhile, some in the media are celebrating, rather than bemoaning, the rise of extremism in the political campaigns. This is CBS CEO Les Moonves speaking recently at a Morgan Stanley-hosted conference in San Francisco.

LESLIE MOONVES: Who would have thought that this circus would come to town? But, you know, it may not be good for America, but it’s damn good for CBS. That’s all I’ve got to say. So, what can I say? It’s—you know, the money’s rolling in, and this is—

LESLIE MOONVES: This is—this is something. I’ve never seen anything like this. And, you know, this is going to be a very good year for us. But—sorry, it’s a terrible thing to say, but bring it on, Donald. Go ahead. Keep going.

AMY GOODMAN: Well, to discuss further partisan politics and the future of the Republican Party, we’re joined by former Republican Oklahoma Congressman Mickey Edwards. He served 16 years as congressman, from 1977 to 1993, during which time he chaired the House Republican Policy Committee. He was also a founding trustee of the conservative Heritage Foundation. Congressmember Edwards’ most recent book is The Parties Versus the People: How to Turn Republicans and Democrats into Americans.

So let’s start there. The Parties Versus the People? Well—

MICKEY EDWARDS: Yeah, Amy, what’s happened is, you know, we’ve set up a structure, through the primaries, closed primaries, that elevates—and sore loser laws—I mean, if you lose your primary, you can’t run in the general election. That’s in 46 states.

AMY GOODMAN: Explain what you mean by that.

MICKEY EDWARDS: So, in 46 states, if you were running against me in a primary for whatever party, you might be far more popular in the state or in the congressional district, but if I beat you, even if only 25 people showed up, you can’t run in the general election. And so, I mean, you talk about democracy. You know, we don’t have one in our political system. And the result of it is that people are—who shows up? The more extreme, the more ideological. And those are the people that, if you’re in office, you’re accountable to, you’re worried about. They can take you out, as they took out Robert Bennett in Utah. Yeah, so—

MICKEY EDWARDS: Oh, it’s—so you wonder: How did somebody like Ted Cruz get to be a senator? You know, and God help, you know, if he runs for president, right? What happened is that he had a primary against David Dewhurst, who was the lieutenant governor, had carried Texas overwhelmingly three times. And in the primary, Dewhurst beat Cruz badly, by 12 points. But they had to have a runoff, because there were more candidates. In that runoff, the total vote that Cruz got amounted to 2 percent of the population of Texas. But because of that law, Dewhurst, who would have beaten him in the general election, was not allowed to run. And so Cruz became the only Republican allowed to be on the ballot in a heavily Republican state. And that’s all across America that is that way. That’s how Mike Lee, who helped Cruz have this temporary government shutdown—that’s how he got elected by a convention that had one-tenth of 1 percent of the population there. And they eliminated Robert Bennett, who had been the longtime senator, who could not be on the ballot.

AMY GOODMAN: I think people don’t quite understand, if they’re not, for example, in an open primary state like Ohio, what that is.

MICKEY EDWARDS: Well, Ohio is not an open primary state. You can cross over, but you can only vote in one. You know—yeah.

AMY GOODMAN: You can, as a Democrat in Ohio, vote for Donald Trump.

MICKEY EDWARDS: Yes, but if you do that, you can’t vote in the Democratic primary. You know, so, an open primary is like the ones you have in California, Washington state, where everybody runs on the same ballot, and every single voter gets to choose among all their options. That’s a much more democratic system.

AMY GOODMAN: And explain how these evolve in each different state.

MICKEY EDWARDS: Well, you know, what happened was, in the progressive movement, there’s a move—you know, it was obviously a correct decision to give the people more voice, not closed rooms, you know, with a few people smoking cigars deciding who’s going to be the nominee. But the unintended consequence is, because most Americans don’t vote in primaries, don’t even know—they’re not aware there are primaries, you know, that, state by state, they stay home, and the extremes dominate who can be on the ballot. You know, if that—if we saw that a small group of people could keep others off the ballot in Peru, we would condemn it, you know. But that’s our system. The same thing, we allow small groups of people in the legislature to decide who can vote, by gerrymandering, you know, who can vote in that election. You know, so—

AMY GOODMAN: Now, explain what you mean. This is another critical point in the United States—

AMY GOODMAN: —and who writes up the—determines the districts.

MICKEY EDWARDS: In 37 states, it is whoever controls the state legislature. So, you’ve got maybe a hundred people in the state legislature. They have their own partisan agenda. They draw congressional district lines to make sure that the people who they agree with, you know, win by taking the other people out of the district. You know, again, if this were some other country—you know, I was on the—I was the ranking member of the Foreign Operations Subcommittee in Congress, you know, gave foreign aid—made foreign aid decisions. And we had a bias in favor of democracies. I’m not sure America would qualify. And so, it’s not the way the Constitution is set up, but it’s the way we’ve allowed our political parties to dominate our process and decide who can run, who can be on the ballot, who can vote in that election. It’s absurd.

AMY GOODMAN: I want to talk with you about Donald Trump, also climate change.

AMY GOODMAN: I want to talk about the Supreme Court nominations. We’re talking to former Republican Congressmember Mickey Edwards, served 16 years as a congressman from Oklahoma. He chaired the Republican Policy Committee, a founding trustee of the Heritage Foundation. This is Democracy Now! We’ll be back in a minute. 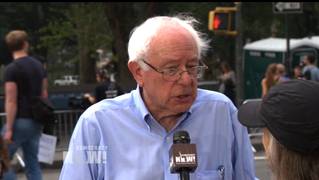 Bernie Sanders at People’s Climate March: To Stop Global Warming, Get Dirty Money Out of Politics