We turn now to North Carolina, where one of the country’s most controversial and restrictive voter identification laws took effect for the first time in Tuesday’s primary elections. The law, which was passed by the Republican-dominated North Carolina state Legislature in 2013, limits the forms of ID acceptable at polling places. As a result, about 5 percent of the state’s registered voters, primarily African-American, are excluded from being able to cast a ballot. Under the law, student IDs, government employee IDs and public assistance IDs—forms of identification disproportionately held by African Americans—are no longer accepted. Passports, Motor Vehicle Department IDs and expired IDs for people over 70—identification disproportionately held by whites—are allowed. We speak to Bob Hall, executive director of Democracy North Carolina, a nonpartisan organization to increase voter participation.

AMY GOODMAN: We turn now to North Carolina, where one of the country’s most controversial and restrictive voter ID laws took effect for the first time in Tuesday’s primary elections. The law, which was passed by the Republican-dominated North Carolina state Legislature in 2013, limits the forms of ID acceptable at polling places. As a result, about 5 percent of the state’s registered voters, primarily African-American, are excluded from being able to cast a ballot.

Bob, welcome to Democracy Now! Very quickly, what did you find in yesterday’s race?

BOB HALL: Well, it was both encouraging, to see so many people turning out—people are committed to vote, to push back against the attempts to make it harder—it also was disappointing. There were long lines. There were IDs that were rejected, that were—should have been accepted. Provisional ballots were not offered to voters. There were a lot of problems.

AMY GOODMAN: What were the—what was the response to the new ID? What kind of ID do people need to show? And did you see this affecting Republicans or Democrats more?

BOB HALL: Well, it’s affecting young people particularly, because there’s not a provision that allows a broader range of IDs to be used, and a provision to use provisional ballots, that says that if you don’t have one of the acceptable IDs, then you can fill out a form, a bunch of forms, two forms. So, young people were, particularly with out-of-state licenses—their student IDs would not be acceptable. They had out-of-state licenses, but those weren’t acceptable. So they had to fill out this paperwork in order to have their ballot counted. People that move around, poor people, people who are more transient, they had problems, because they don’t have the IDs that ordinary folks typically have in their pocket. So, it was a burden for people.

But it was not just the ID that’s a problem. They eliminated—they tried to eliminate same-day registration. They tried to eliminate out-of-precinct voting. Those were provisions that help people. Because of a court order, those two provisions were actually in play. We had them still in this primary election. And you could see that with same-day registration we had over 8,000 voters able to vote, able to use same-day registration. That is, they were not registered, but they showed up during early voting, and they were able to use that provision to vote. It’s disproportionately African-American, disproportionately young people. They want to get rid of that. You can actually see the numbers there. You talked about the number of people that don’t have IDs. That’s very hard to quantify. But it’s—one-and-a-half percent is 100,000 people in North Carolina, one-and-a-half percent of registered voters. So, this is a—it’s going to have—it’s a burden. We don’t need to be adding burdens.

AMY GOODMAN: Interesting, because the—at least what CNN put out last night on turnout, now versus 2008, North Carolina was down 30 percent.

BOB HALL: But 2008 was huge. And 2016 general could be huge. If it’s a Trump-versus-Hillary contest, North Carolina will be ground zero for a huge turnout.

BOB HALL: But compared to 2012, the primary was up in many, many places. But we had long lines. The election officials were not prepared. We tried to tell them after 2014, the changes that were made, that they needed more staff. There need to be major changes in the administration. We’ve got 10,000 poll workers who need to be better trained, with all the different changes that have gone on.

AMY GOODMAN: Well, Bob Hall, we’re going to leave it there. I want to thank you for being with us. Of course, we’ll continue to follow this issue, executive director of Democracy North Carolina, a [nonpartisan] group to increase voter participation. 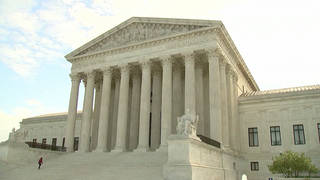