Freedom Is a Constant Struggle: Angela Davis on Ferguson, Palestine & the Foundations of a Movement

In a Women’s History Month special, we speak with author, activist and scholar Angela Davis, professor emerita at the University of California, Santa Cruz. Her latest book is titled “Freedom Is a Constant Struggle: Ferguson, Palestine, and the Foundations of a Movement,” a collection of essays, interviews and speeches that highlight the connections between struggles against state violence and oppression throughout history and around the world. “There are moments when things come together in such a way that new possibilities arrive,” Davis says. “When the Ferguson protesters refused to go home after protesting for two or three days, when they insisted on continuing that protest, and when Palestinian activists in Palestine were the first to actually tweet solidarity and support for them, that opened up a whole new realm.”

AMY GOODMAN: I want to ask you about your new book, Freedom Is a Constant Struggle: Ferguson, Palestine, and the Foundations of a Movement. Talk about this coming together of movements.

ANGELA DAVIS: Well, oftentimes there are historical conjunctures that one cannot necessarily predict, but they’re moments when things come together in such a way that new possibilities arrive. And I think that when the Ferguson protesters refused to go home after protesting for two or three days, when they insisted on continuing that protest, and when they were—when Palestine activists, Palestinian activists in Palestine, were the first to actually tweet solidarity and support for them, that opened up a whole new realm. I don’t know whether many people are aware of the extent to which Palestinian-American activists were involved, from the very outset, in the protest against the killing of Mike Brown in Ferguson. But it has been absolutely inspiring to watch the development of young activists. And I have to catch myself when I say the, you know, “youth movements” and “black youth movements.” I have to catch myself and recognize that these are the movements of our time. They’re not youth movements per se, because youth have always led radical movements. But it’s very exciting to live during this era. And as I’ve pointed out many times, I think it must be extremely exciting to be young now. But it’s also exciting for those of us who are older to see this promise that has emerged in such powerful ways for the first time since perhaps the ’60s and the ’70s.

ANGELA DAVIS: And I think that is what is characteristic of the work that young organizers are doing. They recognize that it’s not possible to effectively create radical consciousness by focusing on a single issue. And whereas many of the movements that challenged police killings in the past focused almost in a myopic way on the prosecution of the individual perpetrator, now movements, these movements, are taking on larger questions, such as structural racism, institutional racism, state violence, the connection between terrorism and racism, the extent to which the counter—the so-called counterterrorist ideologies and approaches are transforming the way racism functions, transforming state violence. And so, it’s so exciting to see the facility with which young activists are able to engage with this intersectionality of struggles. It’s about racism, but it’s also about homophobia, and it’s about transphobia, and it’s about addressing ableism. It’s about creating a sense of international solidarity. And the extent to which Palestine has become central to efforts against racism in this country is an indication of how important international solidarity has become.

AMY GOODMAN: You write “On Palestine, G4S, and the Prison-Industrial Complex.” Explain what G4S is.

ANGELA DAVIS: G4S is the third-largest private corporation in the world, third only to Wal-Mart and Foxconn. It’s a private security corporation. It engages in the ownership and operation of private prisons, private policing and many other activities related to policing and surveillance and imprisonment. It is, interestingly, the corporation that hires more people on the continent of Africa than any other corporation in the world. So, actually, looking at the work that this corporation does gives us a sense of the extent to which security, security as propounded by those who believe that security can only be achieved by violence, whether structural violence or actual violence, is—that is the position represented by this corporation. And, of course, it has played a major role in upholding the occupation in Palestine. And so, we can say, from Palestine to private prisons all over the world to deportation—this company also provides transportation for the deportation of Mexican immigrants. So, if one looks at that corporation, I think that all of the issues that we are addressing can be seen. In a sense, the private corporations recognize the intersectionality of issues and struggles, and we have to do that, as well.

AMY GOODMAN: You write at the beginning of this essay, which was really a speech that you gave, “As I reflect on the legacies of struggle we associate with Mandela, I cannot help but recall the struggles that helped to forge the victory of his freedom and thus the arena on which South African apartheid was dismantled,” as you remembered Ruth First and Joe Slovo and Albertina Sisulu and Govan Mbeki and Oliver Tambo. I mean, what you bring to so much of this is in-depth look at what’s happening here, but globalizing it.

ANGELA DAVIS: And I think that we have to have a global perspective. We need—we used to call it internationalism. And I think we need to create a 21st century internationalism. None of the past struggles in this country, progressive struggles, took place in isolation from what was happening in the rest of this world. And certainly the Africa liberation movements helped to move struggles against racism in this country forward. And I think we need to begin to think in those terms. Palestine represents what, it seems to me, South Africa represented in the 1980s and up until the end of apartheid. So, you know, while we need to focus our attention on what’s happening in Latin America and Asia and Europe—of course, the immigration struggle there, the racism that is so attached to issues of the refugees in Europe—Palestine seems to me that pivot that allows us to enlarge and broaden and extend our consciousness.

AMY GOODMAN: Angela Davis, professor emeritus at the University of California, Santa Cruz. Her latest book, Freedom Is a Constant Struggle: Ferguson, Palestine, and the Foundations of a Movement. When we come back, we’ll talk with Angela Davis about President Obama’s trip to Cuba and Assata Shakur. Stay with us. 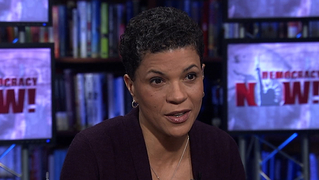