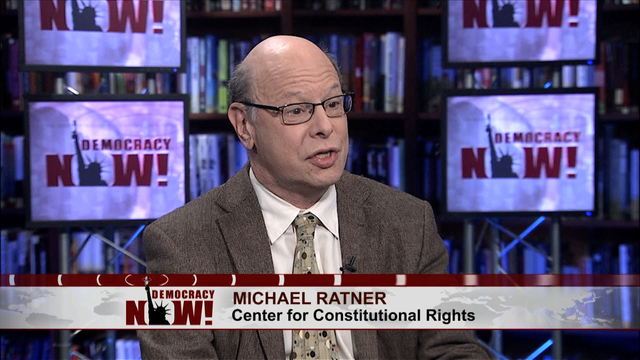 Michael Ratner, the president emeritus of the Center for Constitutional Rights, died today in New York City. For the past four decades he has been a leading champion of human and civil rights, from leading the fight to close Guantánamo to representing WikiLeaks founder Julian Assange to holding torturers accountable, at home and abroad.

#MichaelRatner was my best friend, mentor, role model, co-author, co-teacher. I will miss you so much pic.twitter.com/0Igmu86t21

We have lost one of the great rebels, fighters and friend to the poor and oppressed. RIP Michael Ratner. You made this word better by being.

Michael Ratner was a regular guest on Democracy Now! He last appeared on the program in July at the opening of the Cuban Embassy in Washington, D.C.

Statement From the Center for Constitutional Rights

From Attica to Assange, Michael Ratner has defended, investigated, and spoken up for victims of human rights abuses all over the world. For 45 years, Michael brought cases with the Center for Constitutional Rights in U.S. courts related to war, torture, and other atrocities, sometimes committed by the U.S., sometimes by other regimes or corporations, in places ranging from El Salvador, Grenada, Guatemala, Nicaragua, Cuba, Haiti, Puerto Rico, and Guatemala, to Yugoslavia, Indonesia, the Philippines, Iraq, and Israel. Seeking to hold Bush administration officials accountable for torture, he turned to filing cases under the principle of Universal Jurisdiction in international courts—in Germany, Spain, Canada, Switzerland, and France. Michael dedicated his life to the most important fights for justice of the last half century.

When Michael decided to take on U.S. policies of indefinite detention at Guantanamo in January 2002, it was not a popular position. With Michael, the Center for Constitutional Rights was the first human rights organization to stand up for the rights of Guantanamo detainees, and Michael was a founding member of the Guantanamo Bay Bar Association, a group that grew to over 500 attorneys from all over the country working pro bono to provide representation to the men at Guantanamo that has been called the largest mass defense effort in U.S. history. Michael acted as counsel in the landmark case Rasul v. Bush, and after two and a half years of litigation, CCR and co-counsel won the first Guantanamo case in the United States Supreme Court.

As an attorney, writer, speaker, educator, activist, and as the President of the Center for Constitutional Rights for so many years, Michael Ratner’s passion was not just for the law but for the struggle for justice and peace. Michael’s work on Central America, Haiti, surveillance, WikiLeaks and Julian Assange, whistleblowers, war powers, and Palestine will not soon be matched.

Michael’s leadership and generous spirit have shown the way for new generations of social justice lawyers. He helped found the European Center for Constitutional and Human Rights, bringing CCR’s style of lawyering, which he helped shape, to Europe, where the legal culture was less familiar with public interest lawyering and filing suits to press for social change. He worked with CCR and the Bertha Justice Institute on programs to educate junior lawyers, working in partnership with front-line organizations around the world and fostering artistic partnerships that bring the issues he championed his entire life to a wider audience. Michael’s legacy is the sea of people he has touched—his family, his clients, his allies, his colleagues, and all of the young lawyers he has inspired. Today we mourn. Tomorrow we carry on his work.

StoryMay 12, 2016Suing Dictators Around the World: A Look at How Michael Ratner Helped Reshape Human Rights Law
The original content of this program is licensed under a Creative Commons Attribution-Noncommercial-No Derivative Works 3.0 United States License. Please attribute legal copies of this work to democracynow.org. Some of the work(s) that this program incorporates, however, may be separately licensed. For further information or additional permissions, contact us. 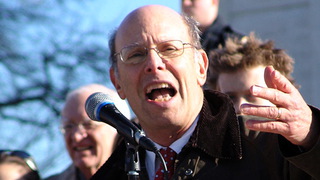