In the southern Mexican state of Oaxaca, a deadly police crackdown against teachers has left nine people dead and more than 100 wounded. On Sunday, police descended on teachers in the community of Nochixtlán, where they had set up blockades to protest against neoliberal education reform and the arrests of two teachers’ union leaders last week on what protesters say are trumped-up charges. “As soon as they arrived, they began to attack. And we were few, very few,” said a Oaxacan teacher. “Then we started running. But they began to attack right away, instantly. At no time did they give warning to clear the area.” We go to Oaxaca to speak with Gustavo Esteva, founder of the Universidad de la Tierra in Oaxaca and author of many books, including “New Forms of Revolution.”

StoryAug 13, 2021Press Freedom Under Attack in Mexico as TV Anchor Gets Death Threat from Cartel over Reporting

AMY GOODMAN: We end our show in the southern Mexican state of Oaxaca, where a deadly police crackdown against teachers has left at least eight people dead, more than a hundred wounded this week. On Sunday, police descended on teachers in the community of Nochixtlán, where they had set up blockades to protest against neoliberal education reforms and the arrests of two teachers’ union leaders last week on what protesters say are trumped-up charges. Democracy Now! correspondent Andalusia Knoll traveled to the area and interviewed survivors of Sunday’s deadly attack. This is a teacher, who did not give her name for her safety.

NOCHIXTLÁN TEACHER: [translated] As soon as they arrived, they began to attack. And we were few, very few. Then we started running. But they began to attack right away, instantly. At no time did they give warning to clear the area. They began to attack right away. And the impotence caused by the media, who said that they did not shoot their weapons. We just went to corroborate with the tire shop about where they fired at us from. We guarded our front side. We still don’t know how they fired at us. And so we guarded our front side. But we realize that if they were positioned like this, then they were already hunting us from afar. Now we understood why. The dead were killed from over there and not exactly from the front.

We are going to stay here until the government is willing to talk. If tomorrow the government is open to dialogue, then the conflict ends. The governor wants what he calls educational reform. And what we want is a dialogue for the kind of change that the people require, the kind that meets their needs. If you go to our communities, there are many needs. How are the kids doing? The children can’t go to school to learn. All they think about is eating, because they don’t eat. No one can learn if they don’t sleep well, if they walked many miles to go to school. So the government should go and see what happens firsthand. And until there is a dialogue, we will not end our protest demanding educational reform. And who will revive our dead? The dialogue won’t bring our dead back to life. And those who are imprisoned, there aren’t just five or 10, there are thousands.

AMY GOODMAN: Well, for more on the protests in Oaxaca, Mexico, we’re joined by Gustavo Esteva, founder of the Universidad de la Tierra in Oaxaca, University of the Land, author of many books, including New Forms of Revolution. Gustavo has also been a columnist for La Jornada. Gustavo, in this last two minutes we have, please explain what happened this week.

GUSTAVO ESTEVA: Well, first, we had a very bloody battle. It is—until now, we had a report of nine executed, assassinated, 23 disappeared, at least 21 arrested, 45 in the hospital, more than a hundred injured. It is—was a very bloody, long-announced battle. It was the—it is the beginning of the war. And we are surprised and amazed that the authorities are following the script, literally the script of 10 years ago—first the teachers’ mobilization, then the sit-in, then the repression. This is a very complex war. It doesn’t—it did not start in Oaxaca. The teachers’ struggle, it is a global struggle. It started in Colombia, in Brazil, in Chile, in the U.S.—everywhere. And today we are in a war trying to say a very firm no to this kind of education. It is useless instruction. We are discussing education. We have a plan of education. We can offer an alternative for—of education. And we are saying no very firmly to all the so-called structural reforms that mean basically a change of only ownership. They are selling our land, our territory. The people are resisting. And then we are resisting with them to oppose this kind of operation. This is a very complex war that just started. We are at the beginning of this very complex war against us, against our territory.

GUSTAVO ESTEVA: In this, we are—yes?

AMY GOODMAN: Gustavo, the—I understand the governor ordered the police, said they could open fire. He was at a wedding party in another state?

AMY GOODMAN: And we just have 20 seconds. What is happening right now?

GUSTAVO ESTEVA: Right now we have a curfew in Nochixtlán, in the place. We are—this moment, we don’t have any specific activity, but we are waiting for the next scenes of the battle. The battle has just started.

GUSTAVO ESTEVA: It is not—we are not [inaudible] the battle.

AMY GOODMAN: We’re going to continue this conversation and post it online at democracynow.org. Gustavo Esteva, founder of the University of the Land in Oaxaca, author of many books, speaking to us from Oaxaca. 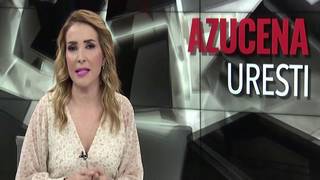