Capitol Hill Democratic lawmakers are continuing a historic sit-in on the floor of the House to demand the Republican leadership take action on gun control after the Orlando massacre left 49 people dead. The sit-in was initiated by Congressmember John Lewis, a veteran of the civil rights movement. Once he launched the sit-in, the Republican leadership ended the session—forcing CSPAN to stop broadcasting from the floor, as the House controls the cameras. But lawmakers began live-streaming the sit-in on Periscope and Facebook. We go to the live scene from the House floor, hear Congressmember Lewis and speak to Congressmember Barbara Lee (D-California).

AMY GOODMAN: We begin today’s show on Capitol Hill, where Democratic lawmakers are continuing an historic sit-in on the floor of the House, the first ever, to demand the Republican leadership take action on gun control after the Orlando massacre left 49 people dead. Democrats are pushing for votes to expand background checks for gun purchases and to curb the sale of weapons to people on government watchlists—a proposal strongly opposed by the American Civil Liberties Union, the Center for Constitutional Rights and other groups.

REP. TED DEUTCH: My friends, my colleagues, that I have shared this experience with, I join you in standing not to help fill those holes—we can’t do it—but just to provide just a little bit of comfort, a little bit of comfort to those families and those communities that ache. That’s why we’re doing this. That’s why we’re going to prevail. And that’s why I’m so proud to have been part of this with all of you. Thank you.

AMY GOODMAN: That was a live stream, as we broadcast, of this historic sit-in that began yesterday morning at just about 11:30, the sit-in initiated by Georgia Congressmember John Lewis, a veteran of the civil rights movement.

REP. JOHN LEWIS: For months, even for years, through several sessions of Congress, I wondered what would bring this body to take action. What would finally make Congress do what is right, what is just, what the people of this country have been demanding and what is long overdue? We have lost hundreds and thousands of innocent people to gun violence—tiny little children, babies, students and teachers, mothers and fathers, sisters and brothers, daughters and sons, friends and neighbors. And what has this body done? Mr. Speaker, nothing. Not one thing. We have turned a deaf ears—we have turned deaf ears to the blood of the innocent and the concern of our nation. We are blind to a crisis. Mr. Speaker, where is the heart of this body? Where is our soul? Where is our moral leadership? Where is our courage?

Those who work on bipartisan solution are pushed aside. Those who pursue commonsense improvement are beaten down. Reason is criticized. Obstruction is praised. Newtown, Aurora, Charleston, Orlando—what is the tipping point? Are we blind? Can we see? How many more mothers, how many more fathers need to shed tears of grief before we do something? We were elected to lead, Mr. Speaker. We must be headlights and not taillights. We cannot continue to stick our heads in the sand and ignore the reality of mass gun violence in our nation. Deadly mass shootings are becoming more and more frequent. Mr. Speaker, this is the fight. It is not an opinion. We must remove the blinders. The time for silence and patience is long gone. We’re calling on the leadership of the House to bring commonsense gun control legislation to the House floor. Give us a vote! Let us vote! We came here to do our job! We came here to work!

The American people are demanding action. Do we have the courage? Do we have raw courage to make at least a down payment on ending gun violence in America? We can no longer wait. We can no longer be patient. So today we come to the well of the House to dramatize the need for action—not next month, not next year, but now, today! Sometimes you have to do something out of the ordinary. Sometimes you have to make a way out of no way. We have been too quiet for too long. There comes a time when you have to say something, we have to make a little noise, when you have to move your feet. This is the time. Now is the time to get in the way. The time to act is now. We will be silent no more. The time for silence is over.

AMY GOODMAN: Just after Georgia Congressmember John Lewis spoke, he and other lawmakers began the historic sit-in. The Republican leadership then formally ended the session. With that, C-SPAN stopped broadcasting from the floor. There are signs reading at the bottom of the screen, “Cameras in chamber controlled by House” and “House cameras are not permitted to show sit-in.” Soon, the only way to watch the Democratic sit-in was through video streamed by the lawmakers on Periscope and Facebook. Soon, C-SPAN began airing these web streams live on the air with those caveats on the bottom. After midnight, chaos ensued when House Speaker Paul Ryan moved to end the sit-in by having lawmakers vote on other bills. As Ryan spoke, Democratic lawmakers chanted, as they had all day, “No bill, no break.”

HOUSE SPEAKER PAUL RYAN: The chair appreciates that members will differ on matters of policy and will seek to express those differences.

HOUSE SPEAKER PAUL RYAN: But the chair would hope that the business of the House could be conducted in a fashion that represent—that respects positively on the dignity and the decorum of this institution to which we all along.

AMY GOODMAN: House Speaker Paul Ryan then announced there would be no more votes until after the July 4th holiday. We go now to Capitol Hill, where we’re joined by Congressmember Barbara Lee of California, chair of the Congressional Progressive Caucus Peace and Security Task Force.

Congressmember Lee, welcome to Democracy Now! I saw you throughout yesterday standing there, also the congressmembers sitting on the floor, redefining the term “speaking from the floor of the House.” Talk about why you have taken over the chamber, the Democratic lawmakers, and what your plans are, what your demands are.

REP. BARBARA LEE: Sure, Amy. Enough is enough. First of all, these measures are very modest gun safety measures: background checks, “no fly, no buy.” Very simple. We can’t even get the Republicans to acknowledge that the will of the American people—90 percent of the public want these modest measures passed. And so, we decided that we had to make sure that the Republicans understood that we weren’t going to take it anymore—and the murders, the terrible terrorist attacks, all of the deaths that are occurring, not just recently, over and over and over again, Amy. In my district, I think almost 90 people last year were killed. Ninety-one people a day are killed here in America. And so it’s time that we passed these modest measures.

But we have to also look at the assault weapons. I mean, it’s a shame and disgrace that we allow weapons of war on the streets of America. Today, there’s a funeral in my district of a young lady, 16 years old, who was gunned down—three others were injured—at a repast, at a vigil after a funeral of two young men who drowned. I mean, this is crazy. It doesn’t make any sense.

And Speaker Ryan really, I say, ought to be ashamed of himself for shutting out the media. You know, we talk about suppression of the media in communist countries, and here look at what has happened in terms of just trying to silence the voices of the American people.

And so, we’re going to continue. You know, we’re going to move forward. And what’s important is to recognize also that the movement is really developing in this country to really begin to take on the NRA, because the Republicans have been bought and sold by the National Rifle Association. And, you know, some may want to vote with us, but, for whatever reason, they feel encumbered and beholden to the NRA. And I think last night was a defining moment for us as Democrats, and hopefully the Republicans will see the light. Their constituents get killed also by weapons of war.

Democratic Effort to Tie Gun Purchase to Terror Watchlist: A First Step or a Dangerous Precedent?

NEXTDemocratic Effort to Tie Gun Purchase to Terror Watchlist: A First Step or a Dangerous Precedent? 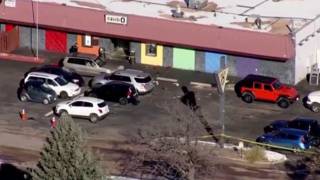