On Monday, in the most significant victory for abortion rights in a generation, the Supreme Court struck down provisions of a sweeping anti-choice law in Texas. In a 5-3 ruling, the justices rejected provisions requiring abortion clinics to meet the costly standards of hospital-style surgery centers and mandating that doctors obtain admitting privileges at a nearby hospital. The impact of Monday’s landmark ruling is already reverberating throughout the country. On Tuesday, justices rejected bids by Mississippi and Wisconsin to revive admitting privileges requirements similar to the one in Texas. Meanwhile, Alabama’s attorney general has announced his state will stop trying to defend its own admitting privileges requirement in wake of the Supreme Court’s ruling. We speak with Stephanie Toti, who argued the landmark Texas abortion case before the Supreme Court.

JUAN GONZÁLEZ: We continue our coverage of the most significant victory for abortion rights in a generation. On Monday, the Supreme Court struck down a provision of a sweeping anti-choice law in Texas. Justice Anthony Kennedy joined Stephen Breyer and all three women on the court in rejecting the restrictions as an undue burden on access to abortion. The Supreme Court ruled against provisions requiring abortion clinics to meet the costly standards of hospital-style surgery centers and mandating that doctors obtain admitting privileges at a nearby hospital. Already, about half of Texas’s more than 40 abortion clinics have closed. If the court had allowed the provisions to go into full effect, advocates warned it would have left Texas with about 10 clinics clustered in four metropolitan areas.

AMY GOODMAN: The impact of Monday’s landmark ruling is already reverberating throughout the country. On Tuesday, justices rejected bids by Mississippi and Wisconsin to revive restrictions on abortion doctors matching those struck down in Texas. Meanwhile, Alabama’s attorney general has announced his state will stop trying to defend its own admitting privileges requirement for doctors who perform abortion, in the wake of the Supreme Court ruling.

STEPHANIE TOTI: It was a thrill to be in the Supreme Court. It was such an incredible opportunity. I was so grateful for the opportunity and to be able to represent all of the women throughout Texas whose rights and whose health were going to be at risk if these—if these laws were upheld. And so, Monday’s decision was incredibly gratifying. It’s a historic victory for women, for reproductive rights and also for science.

JUAN GONZÁLEZ: Well, when you were arguing the case back on March 2nd, did you have any sense then of how the justices might be leaning? I know it’s always hard to gauge by the questions that the justices put forth, but was that a surprise for you, the final vote?

STEPHANIE TOTI: It wasn’t a surprise. We were very hopeful about our chances of victory, because the evidence in the case was so strong. It so clearly demonstrated that these laws were a sham. They do nothing to promote women’s health. And there was absolutely no credible evidence to support them. And so, it was great that the justices recognized that and held that we need to have credible evidence before we’re going to restrict somebody’s constitutional rights.

STEPHANIE TOTI: I’ve been at the Center for Reproductive Rights for about a decade now. And I was lead attorney on this case at the trial, I followed it through to the appeals court, so I stayed with the case when it went to the Supreme Court. There was a lot of intense preparation. I’ve had many arguments, you know, in the lower federal courts, in the state courts.

AMY GOODMAN: But don’t, in a lot of cases, when it goes to the Supreme Court, they choose a Supreme Court expert, they hand it over to another lawyer?

STEPHANIE TOTI: Yes, that does happen sometimes. But the plaintiffs in this case, I think, felt strongly that they would like me to represent them in court. And I think it was meaningful to a lot of people to have a woman of reproductive age there at the court arguing this case. And, you know, the public support that I’ve gotten has been really amazing and very surprising to me, actually, but it’s been very nice.

JUAN GONZÁLEZ: And what about now the impact, just in a couple of days, in other states, in terms of the decision of the court? What are you seeing and hearing?

STEPHANIE TOTI: Well, we’ve—already, three more laws have fallen, two because the Supreme Court declined to grant certiorari, so the court declined to take those cases, and one because the Alabama attorney general has decided no longer to defend Alabama’s TRAP law, recognizing that it’s unconstitutional. So, those are great developments, and we are very hopeful that in the coming days and weeks the other laws will start to fall like dominoes, all of the copycat laws around the country. And there are many of them.

AMY GOODMAN: I want to read from Justice Stephen Breyer’s opinion for the majority. He wrote, quote, “[A]bortions taking place in an abortion facility are safe—indeed, safer than numerous procedures that take place outside hospitals and to which Texas does not apply its surgical-center requirements. … Nationwide, childbirth is 14 times more likely than abortion to result in death, but Texas law allows a midwife to oversee childbirth in the patient’s own home,” unquote. Breyer also noted a colonoscopy, a procedure that typically takes place outside a hospital setting, has a mortality rate 10 times higher than an abortion. And the mortality rate for liposuction, another outpatient procedure, is 28 times higher than the mortality rate for abortion. So, talk about the significance of the decision and these two particular regulations that they struck down—the surgery-style center you have to have and having admitting privileges at the local hospital.

STEPHANIE TOTI: Well, what’s so galling about these laws is that they—they are a sham. They are not designed to promote women’s health. And those statistics that you just read demonstrate that abortion is among the safest procedures that a patient can have in an outpatient setting. If the state of Texas really believed that either one of these requirements was necessary or beneficial for patient health, then it would have applied it across the board to all procedures that you have in an outpatient setting, including those procedures that are far more complex and risky than abortion. But it did not. This was just an effort to target abortion for special regulation to make it impossible for women to access the procedure. And that has a real harm. So women all across the state were being delayed in their ability to access abortion. Because of partial implementation of the law prior to Monday’s decision, about half the clinics in Texas had closed. So, from—we went from more than 40 clinics before the law took effect to 19 that were operating on Monday. And as a result, in some parts of the state, women were having to wait two to three weeks just to get an initial appointment at an abortion clinic, and that’s a really long time to have to wait for such time-sensitive healthcare.

AMY GOODMAN: Just to be clear, this isn’t like same-sex marriage, right, where the Supreme Court makes a ruling, and it’s law across the land?

STEPHANIE TOTI: Well, the court’s ruling certainly is the law across the land. So, going forward, all abortion restrictions will have to be judged by an evidence-based standard. And in all cases, if the burdens that the law impose aren’t justified by significant benefits, then the law will be held unconstitutional. But it’s got to be a case-by-case determination. So it’s not that all admitting privileges laws or surgery center laws across the country are automatically invalid. This decision now creates a presumption that they’re unconstitutional, but we still need to go into court, state by state, and ask the court to strike down each individual law.

STEPHANIE TOTI: Well, that’s absolutely right. I mean, this struggle is going to continue. There is—there has been a relentless onslaught of anti-choice legislation in recent years that have created obstacles all over the country for women trying to access safe and legal abortion care. But what Monday’s decision does is sends a very strong statement that women have a constitutional right to make decisions about their health and their pregnancies, and that they should be able to effectuate those decisions with respect and with dignity, and they shouldn’t have to face unnecessary obstacles in doing that.

AMY GOODMAN: Stephanie, can you talk about the sexism you faced, that you have talked about, in this case, in dealing with opposition counsel, etc.? You had a co-counsel on this case?

STEPHANIE TOTI: Yes. I mean, there is a great team of lawyers working on this case, including our partners from Morrison & Foerster, and Alex Lawrence was my second chair at the oral argument. He’s a partner at that firm.

AMY GOODMAN: And you told Glamour, let’s see, “I had an amazing co-counsel, Alex Lawrence. But because he’s a slightly older male, our adversaries would always presume [that] he was the decision-maker.” You said, “Whenever we needed to negotiate something, they would always go to him and he would always refer the question back to me.”

STEPHANIE TOTI: Right. That’s absolutely right. And, you know, I think that’s a constant battle. You know, as a woman in the legal profession and as someone who’s spent a lot of her career in the nonprofit sector, I think it’s constantly—you know, folks aren’t used to seeing people with that profile in a position of power. And I think that’s why it was—it was really great that I did have the opportunity to argue this case, because I think it sends a message to other women and young women that these opportunities are available to them.

AMY GOODMAN: And the moment you heard the decision on Monday, where were you standing? I’m sure you will remember it forever. And what were you waiting for, and what did you hear?

STEPHANIE TOTI: So, on Monday, I was gathered in the conference room at my office with a number of my colleagues, watching SCOTUSblog, waiting for Lyle. And when we got word of the decision, it was just—there was so much joy, so much elation, just knowing what is at stake in this case and, you know, the health and the rights of so many millions of women. So, it was just—it was a tremendous thrill to get the decision. But then, immediately, you know, we wanted to read it carefully. There’s more than a hundred pages of opinion. So then we—you know, we went into another room where it was quiet, with our highlighters, and got to work, you know, digesting the decision.

When we come back, a major case in Florida, the killing of Víctor Jara, the killer brought to justice. We’ll speak with the great singer’s widow and his daughter. Stay with us. 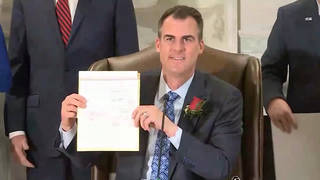