“Just Take Me to Jail”: Remembering Muhammad Ali’s Refusal to Fight in Vietnam

Thousands are expected to gather in Louisville Friday for the funeral of Muhammad Ali, one of the world’s most iconic figures of the 20th century. He was considered by many to be the greatest boxer of all time, but he will also be remembered for his activism against racism and war. In 1966, Ali announced his refusal to fight in Vietnam. After his conscientious objector status request was denied in April 1967, he refused induction. Ali’s title was taken away from him, and he was sentenced to a five-year prison term. He appealed all the way to the Supreme Court, and in 1971 his conviction was finally reversed.

StoryJun 06, 2016“The Greatest”: Ishmael Reed on the Untold History of Muhammad Ali

AMY GOODMAN: Thousands are expected to gather in Louisville on Friday for the funeral of Muhammad Ali, one of the world’s most iconic figures of the 20th century. He was considered by many to be the greatest boxer of all time, but he will also be remembered for his activism against racism and war. He died Friday in Arizona after suffering for decades from Parkinson’s syndrome. Muhammad Ali was born Cassius Clay in Louisville in 1942. He first gained fame in 1960 when he won the gold medal at the Olympic Games in Rome.

NEWSREEL: But the most popular U.S.A. winner was the lighthearted Cassius Marcellus Clay V, in white here, who easily defeated Poland’s Zbigniew Pietrzykowski. Clay was by far the best of the U.S.A. boxers.

AMY GOODMAN: After winning the gold medal, the young Cassius Clay returned to the segregated South. In a 1971 interview on the BBC, he described what happened next.

And I went downtown that day, had my big old medal on and went in a restaurant. See, at that time, like, things weren’t integrated; black folks couldn’t eat downtown. And I went downtown, I sat down, and I said, “You know, a cup of coffee, a hot dog.” He said—the lady said, “We don’t serve Negroes.” I was so mad, I said, “I don’t eat them, either. Just give me a cup of coffee and a hamburger.”

You know, and I said, “I’m the Olympic gold medal winner. Three days ago, I fought for this country in Rome. I won the gold medal. And I’m going to eat.” The manager—heard her tell the manager, and she says—he said, “Well, I’m not the—I’m not the man—he’s got to go out.” Anyway, I didn’t raise—they put me out. And I had to leave that restaurant, in my home town, where I went to church and served in their Christianity, and fought—my daddy fought in all the wars. Just won the gold medal and couldn’t eat downtown. I said, “Something’s wrong.”

AMY GOODMAN: That was Muhammad Ali describing his return to Louisville, Kentucky, after winning the 1960 Olympic gold medal. Four years later, he became the heavyweight champion of the world, defeating Sonny Liston. After the fight, he declared, “I am the greatest.” On the next day, the then-Cassius Clay shocked the sports world and announced he was joining the Nation of Islam and changing his name. After briefly being named Cassius X, Nation of Islam leader Elijah Muhammad renamed him Muhammad Ali. For years, many news outlets refused to refer to the boxer by his new name, instead using what Ali called his slave name. Muhammad Ali grew close to Malcolm X, and he became a vocal critic of U.S. actions at home and abroad. The FBI and National Security Agency soon began monitoring his communication. In 1966, Muhammad Ali filed for conscientious objector status and announced his refusal to fight in Vietnam.

MUHAMMAD ALI: My conscience won’t let me go shoot my brother, or some darker people or some poor, hungry people in the mud, for big, powerful America. And shoot them for what? They never called me nigger. They never lynched me. They didn’t put no dogs on me. They didn’t rob me of my nationality, and rape and kill my mother and father. Why would I want to—shoot them for what? I got to go shoot them, those little poor little black people, little babies and children, women; how can I shoot them poor people? Just take me to jail.

AMY GOODMAN: After Muhammad Ali’s conscientious objector status request was denied in April 1967, he refused induction. Muhammad Ali’s title was taken away from him. He was sentenced to a five-year prison term. He appealed all the way to the U.S. Supreme Court, and in 1971 his conviction was finally reversed. He did not go to prison, but was forced to wait four years before regaining his boxing license. In 1974, Muhammad Ali reclaimed the world heavyweight champion title, defeating George Foreman in what was known as the Rumble in the Jungle, an historic boxing match in Kinshasa, Zaire, now the Democratic Republic of the Congo. This is a clip from the documentary When We Were Kings.

MUHAMMAD ALI: Yeah, I’m in Africa. Yeah, Africa is my home. Damn America and what America thinks. Yeah, I live in America, but Africa is the home of the black man, and I was a slave 400 years ago, and I’m going back home to fight among my brothers.

AMY GOODMAN: In addition to fighting overseas, Muhammad Ali grew increasingly involved in world affairs. During a visit to two Palestinian refugee camps in southern Lebanon, Ali said, quote, “In my name and the name of all Muslims in America, I declare support for the Palestinian struggle to liberate their homeland and oust the Zionist invaders,” unquote. In 1990, Muhammad Ali traveled to Baghdad and met with Saddam Hussein against the wishes of the U.S. government. During the trip, he secured the release of 15 Americans being held by the Iraqi government.

To talk more about Muhammad Ali, we’ll be joined by two guests: Ishmael Reed and Elizabeth Alexander. Ishmael Reed is the educator, writer and activist. He wrote the book, The Complete Muhammad Ali, which was published last year, recipient of the MacArthur “genius” award, currently a visiting scholar at the California College of the Arts. And we’ll be joined by Elizabeth Alexander, poet and professor, director of Creativity and Free Expression at the Ford Foundation, former chair of African Studies—African American Studies at Yale University. She is the author of the poem “Narrative: Ali,” written from the perspective of Muhammad Ali. She is the poet who in 2009 recited the inaugural poem when President Obama first took office. We’ll be back with them in a minute.

“The Greatest”: Ishmael Reed on the Untold History of Muhammad Ali 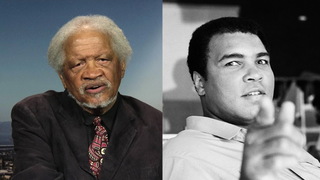 “The Greatest”: Ishmael Reed on the Untold History of Muhammad Ali