The Democratic Party platform committee held its last meeting in Orlando, Florida, over the weekend ahead of the party’s convention at the end of this month. The meeting of Clinton and Sanders delegates resulted in what’s being called the most liberal Democratic platform in a generation. The draft platform still needs to be ratified at the Democratic National Convention in Philadelphia, but it is already widely being touted as a victory for Sanders. Sanders appointed five members to the committee earlier this year, including scholar and racial justice activist Cornel West, leading environmentalist and 350.org co-founder Bill McKibben and Minnesota Congressmember Keith Ellison, who chairs the House Progressive Caucus. The new platform includes Sanders’ call for a $15-per-hour minimum wage, Social Security expansion and a carbon tax to price its impact on the environment. We speak with award-winning documentary filmmaker and Sanders delegate Josh Fox. He’s the director of “How to Let Go of the World and Love All the Things Climate Can’t Change,” which premiered at the Sundance Film Festival earlier this year and is now playing on HBO.

AMY GOODMAN: As Vermont Senator Bernie Sanders is expected to endorse former Secretary of State Hillary Clinton today at a joint rally in Portsmouth, New Hampshire, we turn to look at how two Sanders supporters are preparing for the Democratic National Convention. The television and film actor Shailene Woodley has launched a cross-country caravan to bring people to the DNC in Philadelphia. Woodley appeared in the TV series Secret Life of the American Teenager and has starred in films including The Divergent Series and The Fault in Our Stars. She received a Golden Globe nomination for her role as Alex King in The Descendants, which she starred in with George Clooney.

ALEX KING: [played by Shailene Woodley] You don’t have a clue, do you? Dad—Dad, Mom was cheating on you. That is what we fought about. When I was home at Christmas, I caught her with a guy. It made me sick to see her near you. I went back to school thinking that that was it, that I was just done with her. I was going to call and tell you everything. And then the accident happened, and I was waiting ’til she woke up, I guess.

AMY GOODMAN: That’s actor Shailene Woodley, and she’s joining us today to talk about the Up To US Caravan to the Democratic National Convention. We’re also joined by, here in New York, Oscar-nominated documentary filmmaker Josh Fox, director of Gasland and the new HBO film How to Let Go of the World. Josh is just back from Orlando, where he addressed the Democratic National Convention platform meeting over the weekend.

Shailene Woodley and Josh Fox, welcome to Democracy Now! Josh, let’s start with you. What happened in Orlando? The final vote on the Democratic platform, though it’s not absolutely final—it can be changed at the convention—but the vote for the platform to go to the convention happened.

AMY GOODMAN: Well, you were there in Orlando.

JOSH FOX: Yeah, well, I’m on the New York platform committee. So what happened in Orlando was a two-day fight on every single issue facing America right now, and basically a fight for the core and the spirit and the soul of the Democratic Party. And on a lot of those issues, Bernie Sanders and our campaign won. On many of those issues, Bernie Sanders and our campaign and the sort of people’s agenda that was out in front of us didn’t win. So, there is, you know, I think, a lot to celebrate in what happened over the weekend in Florida. Certainly, we had a victory on the Fight for $15, which was brought to us by Nina Turner. We had a monumental and historic achievement on the environment and on climate, which was negotiated by Bill McKibben, by Ben Jealous, by myself, by Dr. Cornel West, by Jane Kleeb of Bold Nebraska. And so, there were moments—

AMY GOODMAN: Who we just heard.

JOSH FOX: There were moments here where we had huge changes in the direction of the Democratic Party, certainly on energy. However, on TPP, on expanded benefits for senior citizens, on many other issues, we failed—on Gaza—to persuade Clinton delegates, who were voting as a bloc pretty much the entire time, that—so there’s a progressive agenda that is fighting its way in to the Democratic Party.

And what’s interesting is we hear a lot of talk about unity, and I think today is, you know, going to be very difficult for a lot of people, but true unity has to do with the truth, right? It doesn’t have to do with compromise between politicians. When the Democratic Party actually reaches where the people want to be on certain issues, that’s when you feel this idea of unity, rather than some of what we understand from the Clinton camp as being really lobbyist-driven and corporate-driven. It doesn’t feel so much like we’re in the same room as the rest of the American people.

AMY GOODMAN: Do you agree with Congressman Ellison, who we just heard from, saying they got the best they can get, and, as Bernie Sanders says, it’s the most progressive platform? But, for example, the ban on fracking was voted down. That’s an issue that you make all your films about.

JOSH FOX: Well, the ban on fracking was voted down. But, actually, in a way, we won something about the future, which is almost as important as a current ban on fracking. We got the Democratic Party to say that fracked gas power plants should not be developed, that we should develop wind and solar. That cuts the legs out of the future of the entire fracking industry. What the Democratic Party has been saying up until now is we need to transition to fracked gas. We need to build 300 new fracked gas power plants. This would be an utter disaster for the climate. And this would be—this would incur probably 2 million new fracking wells in the future.

What I would say is, all of our real gains are movement gains. These are not gains that Democratic establishment politicians came into office with. Andrew Cuomo didn’t arrive in Albany saying, “Oh, I want to ban fracking.” You know, Hillary Clinton is not going to arrive in Washington, if she gets elected, with that kind of mentality. But it’s going to be our job, as a movement—and I think Bernie Sanders knows this, I think Bill McKibben knows this, and I think a lot of the Sanders folks know this—that it is our job right now to continue the political revolution. And that is what’s in front of us at the moment, and I think that’s what’s so brilliant about what Shailene is doing. 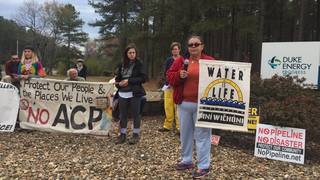