Following Sunday’s killing of three police officers in Baton Rouge on Sunday, after a week of protests sparked by the fatal shooting by police of resident Alton Sterling, we speak with former Ohio State Senator Nina Turner, who is in Cleveland, where Democracy Now! is covering the Republican National Convention. Her son is a police officer, and her husband is a retired police officer. “Good police officers prop up bad police officers, and they won’t tell, they won’t talk about what is wrong within this system,” Turner says. “We have to have good police officers call out their sisters and brothers who may be doing things wrong.”

AMY GOODMAN: This is Democracy Now!, democracynow.org. This is “Breaking with Convention: War, Peace and the Presidency.” I’m Amy Goodman. In Baton Rouge, three police officers were killed, three others wounded, in a shooting rampage Sunday. The shooting began just before 9:00 a.m. at a gas station on the city’s Airline Highway, a mile from the Baton Rouge police headquarters. According to reports, Baton Rouge officers were responding to a 911 call of shots fired when they were ambushed the gunman. The slain officers were identified as Montrell Jackson and Matthew Gerald of the Baton Rouge Police Department and Deputy Brad Garafola of the East Baton Rouge Parish Sheriff’s Office.

Officials identified the gunman as Gavin Long of Kansas City, Missouri. Long, who’s African-American, served in the Marines from 2005 to 2010, reaching the rank of sergeant. He deployed to Iraq from 2008 to 2009. Long had a prolific online presence. Earlier this month, he commented on the killing of five police officers in Dallas, writing, quote, “With a brother killing the police you get what I’m saying—it’s justice,” unquote.

On Sunday afternoon, I spoke with former Ohio State Senator Nina Turner here in Cleveland. I met up with her at her former high school, John F. Kennedy High School. Her son is a police officer, and her husband is a retired police officer. I asked her to talk about what happened in Baton Rouge.

My heart aches beyond what I can put into words, in terms of people targeting police officers. That cannot happen in a civilized society. And all of the concerns, the legitimate concerns that the African-American community has about injustice within the justice system, it is valid. It’s been valid for a very, very long time; I would say since my—since the first Africans were shipped over here, it has been valid. And we have never quite dealt with it as a nation. But for anybody to target law enforcement officers is absolutely wrong and totally unacceptable. So I grieve. I mean, I almost started crying. I had just gotten off the set with Joy Reid this morning, and I had to keep myself from crying, because I thought about those families, but I thought about my son. And my husband was a former police officer, so I get this on both sides. I get it from the pain, you know, the things my son has to endure out of uniform and now the things that he has to endure in uniform. And so, my heart goes out to all the law enforcement folks all over this country. It is wrong. And we’ve got to get it together.

And, Amy, this is more than talk now. What else has to happen before people understand? It is a powder keg. It almost reminded me of Lyndon B. Johnson, remember, when he commissioned the Kerner Report. And if you read that report today, they talked about the volatile situation between the African-American community and police. It is the same thing in 2016. But what is totally unacceptable is the gunning down of law enforcement officers. It just cannot be tolerated.

AMY GOODMAN: What do you think needs to happen? I mean, we’re about to go with you to see where Tamir Rice was killed by police.

You know, I’m fortunate that Governor John Kasich created a task force, at my request and two of my other colleagues in the Legislature, after the death, the shooting of Tamir Rice and John Crawford III in Beavercreek, outside of Cincinnati—or Dayton area, outside of the Dayton area. And we said, “Governor, you have to do something.” And the governor didn’t hesitate, Amy. He created that task force. You and I have talked about that task force before, where we got together and traveled this entire state to give people the opportunity to have voice, not people on high, not people on titles, talking to them, but them talking to us. And from that 600-page report, we put together a list of recommendations to the governor, and then the governor turned that task force into a collaborative, so that we have action. And for the first time in Ohio’s history, our police, our law enforcement agencies, which there are almost 1,000 of them, will have standards about the use of force, the use of deadly force. We’re now looking at cameras.

And we’re also looking at implicit bias, which brings me to what happened to Tamir Rice and what happened to John Crawford III and what happened to Mr. Sterling and Castile. A lot of that may have to do with some implicit biases that some law enforcement officers—and, dare I say, the entire country, because it really is unfair, in a way, to put all this at the feet of law enforcement, when all of us are recovering—recovering in this country in terms of how we see African-American men, in particular, but it happens to women, too. And so, African—the police officers are faced with having to deal with those implicit biases in everyday actions. They have taken an oath of office to protect and serve, but oftentimes that protecting and serving stops when it comes to the African-American community.

But I’m proud in Ohio that we’ve had no incidences or outbreaks of violence or anything, even after the Brelo case. You may recall that in Cleveland in 2012 two unarmed African Americans, a woman and a man, 137 shots into their car. Officers said they thought they were shooting at them, and it turns out that the car was—backfired. But you shoot at them 137 times? The last time something like that happened in the United States of America—

AMY GOODMAN: These were police officers shooting at them.

NINA TURNER: These were police officers shooting. Cleveland police officers followed this car. At some point, you had to realize you were not being shot at. But two African Americans, unarmed, 137 shots. The last time something like that happened in this country, it was Bonnie and Clyde. This happened in 2012. Only one officer was brought to trial, Officer Brelo, and he was acquitted. So, time and time again, the African-American community is feeling like, “Where is the justice?”

AMY GOODMAN: That case, where both of those individuals were killed in the car, gunned down more than a hundred times, led to the consent decree between Justice Department and Cleveland police, which they’re under today.

NINA TURNER: They’re under today. But people don’t see that consent decree. And even though there’s a group of people working, a group of everyday citizens working with police and with the federal government, everyday people don’t even know that that is going on. And so, that is why we need tangible things to happen.

One of the recommendations from the task force that came from the people was accountability and transparency. Folks are not asking for more than what they deserve. They do deserve that. And one of the things, Amy, I will never forget that a young millennial said to us as we were traveling the state, he said, “There is a no-snitch culture among the criminal element, and law enforcement always want us to kind of penetrate that: Tell. If you see something, say something. If somebody’s breaking the law, say something.” He said, “But what about the no-snitch culture in the police?” That, in other words, good police officers prop up bad police officers, and they won’t tell. They won’t talk about what is wrong within this system. I believe another thing that we have to do is—to repair that divide is to have good police officers call out their sisters and brothers who may doing things wrong.

AMY GOODMAN: That’s former Ohio State Senator Nina Turner, who represents Cleveland. I met up with her at her old high school, John F. Kennedy High School. Her son is a police officer, as was her husband. We then went over to where Tamir Rice was killed; we’ll be playing that later in the week. Tamir Rice would have turned 14 on June 25th.

This is Democracy Now!, democracynow.org, The War and Peace Report. When we come back, we’ll be talking about Turkey, the attempted coup this weekend. We’ll be talking about the FBI visiting homes of people they thought might be protesting this week here in Cleveland. We’ll talk about the corporations that have refused to support the Republican convention here. And we’re going to talk about the newly released document, something like 13 years in the waiting, around Saudi Arabia and 9/11. Stay with us.

Kurdish Activist: Erdogan Should Be Pushed Out, But by the People, Not the Military

NEXTKurdish Activist: Erdogan Should Be Pushed Out, But by the People, Not the Military 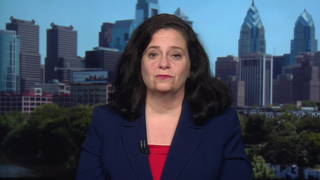