Cornel West: Justice and Accountability are Necessary to End Tension over Killings by Police

We discuss the killing of three police officers in Baton Rouge and the recent nationwide protests against police brutality with Cornel West. Cornel West is a professor at Union Theological Seminary. “When I hear the authorities call for peace,” West says, “I say, yes, but it’s not the absence of tension. It’s got to be the presence of that justice and accountability.”

AMY GOODMAN: This is Democracy Now!, democracynow.org, The War and Peace Report. I’m Amy Goodman. We are “Breaking with Convention: Power, Politics and the Presidency.” Every day, we’re broadcasting for two hours, this week from Cleveland during the Republican National Convention, which opens later this afternoon, and next week from Philadelphia.

To talk more about the killing of the three police officers in Baton Rouge and the recent nationwide protests against police brutality and why he’s here in Cleveland at the Republican National Convention for the week, we’re joined by professor Cornel West. Dr. West is a professor at Union Theological Seminary. He endorsed Bernie Sanders for president last summer, was appointed by Sanders to serve on the Democratic platform committee, author of numerous books, including Black Prophetic Fire.

Welcome to Democracy Now! It’s great to have you with us right here in Cleveland.

CORNEL WEST: In the midst of the madness here, my dear sister.

AMY GOODMAN: The killings—the killings of the police officers in Baton Rouge, before that, in Dallas, the killing of the African-American residents Alton Sterling as well as Philando Castile?

CORNEL WEST: Yeah, yeah. Well, there will never, ever be peace without justice. There will never be calmness without accountability. There will never be order without fairness. So when I hear the authorities call for peace and call for calmness and call for order, I say, yes, but it’s not the absence of tension. It’s got to be the presence of that justice and accountability and that fairness. When I hear the authorities—even President Obama says, well, the attack on the police is an attack on all of us. I said, OK, but an attack on black people, especially black youth, is also attack on all of us. If, in fact, the attack on the police is an assault on all of us, then when the police unfairly maims and murders civilians, the police is killing on behalf of all of us. Well, I don’t want the police killing on behalf of me. I want the police to be treated with respect and fairly, and I want black youth and brown youth, black men and black women to be treated fairly.

CORNEL WEST: Yeah, the great Nina Turner. And then the AIDS Healthcare Foundation last night, with Raheem DeVaughn and Mary Mary and The Roots. You know, and, see, 49 years ago yesterday was the death of John Coltrane. And for me, that’s crucial, because it’s really about a love supreme, it’s really about the giant steps that we have to take. But we have to hit the streets. We’ve got to preserve the resistance and let the young folk know, see the tears of our dear sister, the aunt. You know, stop the killing. Stop killing black people. Stop killing working people. Because it’s not just a racial thing. They’re killing a lot of white brothers and sisters, too, but it’s disproportionately chocolate. And, yes, you’ve got to stop killing the police, but we’re in this together. We got social neglect. You’ve got economic abandonment. Every day, you’ve got poor black people who are wrestling with unbelievably oppressive conditions. And we’ve got to be able to speak candidly and honestly about that and come up with some ways of rechanneling a lot of this rage and anger. 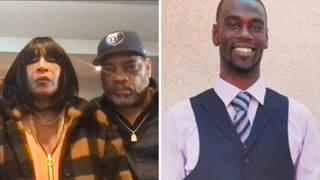