Meet the Student Fighting Case Western U. for Shutting Down Campus to House 1,900 Police Officers

Students at Case Western Reserve University, located nearly five miles from the arena hosting the RNC, are protesting the university’s decision to house 1,900 armed police officers and National Guardsmen in campus dormitories during the convention. The security officers are part of an auxiliary force assisting the Cleveland Police Department during the event. Last Monday, the university announced a virtual shutdown of its operations during the convention, citing concerns that the recent shootings in Dallas, Louisiana and Minnesota could provoke a “significant degree of conflict” in the city. We speak with Taru Taylor, Case Western Reserve University law student who co-authored a petition objecting to the police presence on campus during the RNC.

StoryJul 22, 2016As RNC is Held in Quicken Loans Arena, Learn the Inside Story of Company’s Trumpian CEO Dan Gilbert

AMY GOODMAN: This is Democracy Now! We’re broadcasting from Cleveland, covering the Republican National Convention and what’s happening in the streets in the larger city. Right now, students at Case Western Reserve University here in Cleveland are protesting their university’s decision to house 1,900 armed police officers and National Guardsmen in campus dormitories during the RNC. The security officers are part of an auxiliary force assisting the Cleveland Police Department during the convention. Students have expressed their concern in a Change.org petition, “Student Safety During Riot Police Occupation of Case Western Reserve University.” Last Monday, the university announced a virtual shutdown of its operations during the convention, citing concerns that the recent shootings in Dallas, Louisiana and Minnesota could provoke a “significant degree of conflict” in the city. Case Western Reserve University is located nearly five miles from the arena hosting the Republican National Convention here in Cleveland.

We’re joined now by Taru Taylor. He is Case Western Reserve University law student who co-authored the petition objecting to the police presence on campus during the RNC.

AMY GOODMAN: Talk about how many police we’re talking about, how many state troopers, and what’s happened at Case.

TARU TAYLOR: Well, initially, we were informed by a whistleblower, essentially, that there would be 1,500 police officers. This was about a month ago. And so, that’s what prompted our petition. And subsequently, we have found out that there would be 1,700 police officers and 200 members of the National Guard who would be housed, essentially quartered, at our university during the RNC.

AMY GOODMAN: What was your problem with this?

TARU TAYLOR: Well, essentially, it’s a Third Amendment violation that these out-of-state police officers are coming into our university and, essentially, that there was no consent, that President Snyder unilaterally decided to house these police officers, and no one at the university knew about this until—not no one, but students and many members of the faculty did not know about this. And so, that’s what prompted, again, our petition, just to bring awareness to the campus community and also to voice some of our concerns that these police officers coming into town would be under the auspices of the Cleveland Police Department. And so, some of our concerns had to do with the fact that in December of 2014 the Department of Justice did issue a report saying that there was a pattern or practice of unreasonable force and unconstitutional policing, especially with regard to the Fourth Amendment. And so—and this is—this pattern or practice is going on all over the United States. And so, those were some of our concerns. And so, for example, we wanted police officers not to have their weapons on campus, so as to follow the policies and procedures of Case Western Reserve.

AMY GOODMAN: Well, I want to ask about Case Western Reserve President Snyder’s explanation of the use of the term “profiling” in a message sent to the Case Western community. After she was criticized for suggesting the university community was, quote, “profiling the police, she clarified her use of the phrase by writing, quote, “In that [June 24th] email, I urged that members of our community not stereotype all police officers as violent or prejudiced. Nevertheless, given the current national context, I regret that I described such behavior as 'profiling,' and that I was not more careful with my language.” What is your response to that, Taru?

AMY GOODMAN: I have to say, these officers are not very happy also.

AMY GOODMAN: We were walking along. There are officers from all over the country here. I’m not sure if they were at Case, but a group of them who—it had the badge of the Louisville Police Department. We asked, you know, where they were staying, and they said, “At university. There’s no air conditioning.” They were packed in there. They drove for many hours to get here, and they were very frustrated. That doesn’t help.

TARU TAYLOR: Right. And I do want to add that there does seem to be a general denial of—people tend to—for example, what happened with Tamir Rice, and [Malissa] Williams and Timothy Russell, whose car had accidentally backfired, and they were—there was a car chase, and they were chased around the streets of Cleveland. One hundred police officers, a third of the Cleveland Police Department, fired 137 shots into their car. Each of them were riddled with 20 bullets. Now, the Department of Justice spoke of this as part of a pattern or practice, but yet there’s this want to make this as if this is an isolated incident or as if these are isolated circumstances. But again, this is a pattern. And so, these were some of our concerns.

AMY GOODMAN: Where are the officers from, and the state troopers?

TARU TAYLOR: Well, I’ve—that’s one of the questions that we asked: Where are these officers coming from? And the university was less than forthcoming when we did ask about—we also asked about vetting. Have these police officers been vetted, in terms of the individual police officers perhaps having histories of unconstitutional policing and excessive force? But there was not that vetting. And so, I’ve seen from Florida, Tennessee—

AMY GOODMAN: I’ve seen Indiana, Louisville, so Kentucky. So, where are all the students now? I mean, were they tossed out of the university during this time for the police to be moved in?

TARU TAYLOR: Well, students were offered an option to go home, essentially, or that the university would sponsor plane tickets for them to go elsewhere because of the overall shutdown of the campus.

AMY GOODMAN: Finally, Taru, where is this discussion and dialogue going? You live here in Cleveland. You live off campus. But has this sparked a university-wide discussion about the role of police and their relationship with students like you?

TARU TAYLOR: Sure, that one thing that we wanted to emphasize, as well, is that the university is essentially aiding and abetting these police, who, at least since 1999 in Seattle with the WTO protests, have been suppressing people’s First Amendment rights to peaceful assembly. We also saw it in 1968 in the Democratic National Convention. That since the militarization of police, especially with the advent of the war on drugs, there has been this sense in which police have been acting as military, that the framers of the Constitution were concerned with the rise of a standing army, and their specific concern was with military enforcing domestic law. And they did put up barriers to prevent military acting as police, but what about police acting as military—SWAT teams, the 1033 Program, through which the government has been giving more and more military equipment?

AMY GOODMAN: You know, interestingly, I think Cleveland got $50 million. Twenty million dollars will be in various kinds of equipment that the police department will have even after the Republican National Convention.

AMY GOODMAN: Well, we’re going to leave it there, but continue to follow this story. Taru Taylor, thanks so much for joining us.

AMY GOODMAN: Case Western Reserve University law student who co-authored the petition objecting to the police presence on campus during the RNC.

That does it for our show. I’ll be doing a report back from the Republican and Democratic conventions Friday the 29th of July in Provincetown, Massachusetts, at Town Hall, and also Saturday, July 30th, at Martha’s Vineyard, the Old Whaling Church. Check our website for details at democracynow.org. Follow our team for the latest updates from the RNC this week on Facebook, Twitter, Instagram and now Snapchat. And special thanks to Denis Moynihan, Laura Gottesdiener, Mike Burke and all the folks that made this broadcast possible.

As RNC is Held in Quicken Loans Arena, Learn the Inside Story of Company’s Trumpian CEO Dan Gilbert 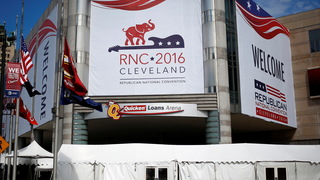 As RNC is Held in Quicken Loans Arena, Learn the Inside Story of Company’s Trumpian CEO Dan Gilbert