In Donald Trump’s speech to accept the Republican presidential nomination, he continued to call for a ban on Muslim immigrants and spoke about how he would change U.S. policy in the Middle East. We get reaction from Raed Jarrar, an Iraqi-born activist who works with the American Friends Service Committee.

AMY GOODMAN: This is Democracy Now!, democracynow.org, “Breaking with Convention: War, Peace and the Presidency.” I’m Amy Goodman. Real estate mogul Donald Trump has formally accepted the Republican presidential nomination. In his record hour-and-15-minute speech, Donald Trump portrayed the United States as a nation humiliated abroad and under threat at home. One of the main themes of the night was putting America first.

DONALD TRUMP: The most important difference between our plan and that of our opponent is that our plan will put America first. Americanism, not globalism, will be our credo. As long as we are led by politicians who will not put America first, then we can be assured that other nations will not treat America with respect, the respect that we deserve. The American people will come first once again. My plan will begin with safety at home, which means safe neighborhoods, secure borders and protection from terrorism. There can be no prosperity without law and order.

AMY GOODMAN: Donald Trump also spoke about how he would change U.S. policy in the Middle East.

DONALD TRUMP: We must abandon the failed policy of nation building and regime change that Hillary Clinton pushed in Iraq, in Libya, in Egypt and in Syria. Instead, we must work with all of our allies who share our goal of destroying ISIS and stamping out Islamic terrorism and doing it now, doing it quickly. We’re going to win. We’re going to win fast.

DONALD TRUMP: Lastly, and very importantly, we must immediately suspend immigration from any nation that has been compromised by terrorism until such time as proven vetting mechanisms have been put in place. Anyone who endorses violence, hatred or oppression is not welcome in our country and never, ever will be.

RAED JARRAR: It was—I think it was a good conclusion of the few days of the RNC, especially when it came to the anti-Muslim rhetoric. And many Muslim Americans, including myself, have been hearing these sentiments in the last few years, but now these concepts and ideas and hatred against Muslims is becoming way more mainstream than it used to be in the past. And the fact that Donald Trump can stand out there and bash Muslims and call for banning Muslims from coming from the country indicates a new—that we’ve crossed a new threshold with Islamophobia. I don’t think it’s Islamophobia anymore. It’s not fear of Muslims. It’s actively hating Muslims. It’s actively trying to keep them outside of the country or actively trying to discriminate against them when they are inside the U.S.

AMY GOODMAN: Anything surprise you this week? A new tone that was adopted? Pushing forward new policies?

RAED JARRAR: I was surprised by my interactions with the delegates when they were coming in and out. I was standing outside the main gate. And I was surprised at the level of anti-Islam, anti-Arab, anti-immigrant sentiment outside. You know, I had a few interactions. And I was also surprised by the lack of diversity of the GOP at large. You know, there is an obsession with issues that has to do with Muslims and Muslim Americans. I didn’t really see any Muslim Americans going through. And like the interactions that I had indicated that many of the extreme positions in the past have become mainstream positions within the GOP. I was holding a sign that said “Resist white supremacy,” and I got in many discussions with people who wanted to either convince me that white people are superior, you know, or attacked me because I had the sign there. They were really angry. And I think the fact that white supremacy is being defended on the gates of GOP is really scary.

AMY GOODMAN: So, you have been criticizing the Iraq War from the beginning. You were born in Iraq, raised there, came here. You’re an Iraqi American right now. So that went through the Bush years, but also through the Obama-Clinton years. We just played a clip of Donald Trump saying, “We must abandon the failed policy of nation building and regime change that Hillary Clinton pushed in Iraq, Libya, Egypt and Syria.” Now, you’ve been critical of that also.

RAED JARRAR: Correct, and I agree with that half of the sentence, but I don’t agree with the rest of it, because he said let’s replace that with a policy of working with our allies in the region to take out Islamic extremists. And that is even more problematic than U.S. direct intervention. The Obama administration has been relying on our so-called allies in the region. And these forces, whether they are in Iraq or in Saudi Arabia or in the rest of the region, have been committing mass atrocities against their own people and their neighbors. So the fact that the U.S. is not directly bombing or sending troops doesn’t mean that these crimes are not our moral obligation, as well, to deal with them, because the U.S. is funding them and training them and justifying them. So I didn’t like the—it wasn’t that Trump was saying let’s change this policy to a policy where the U.S. would stop interfering in the region and messing with people’s domestic issues. He’s saying let’s stop these policies by relying on corrupt regimes in the region that are even worse in dealing with human rights than our own presence.

AMY GOODMAN: Raed Jarrar, I want to thank you for being with us, Iraq consultant for American Friends Service Committee. This is Democracy Now! When we come back, we talk with some of the chief anchors of the networks about the rival network, about Fox News, and the resignation of one of the most powerful people in the Republican and conservative movement and media, Roger Ailes. Stay with us. 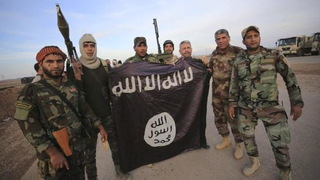