In Part 2 of our interview with Nobel Prize-winning economist Joseph Stiglitz, he says Obama’s mistakes are supporting the Trans-Pacific Partnership and not pushing financial sector reform as far as he could have. He also says the Brexit vote in Great Britain and support for Donald Trump in the U.S. is driven by “anger and a lack of trust, and a strong sense that the system is rigged” among people who have lost their jobs due to trade and financial liberalization. “And you know what? I think they’re right.”

Watch Part 1 of this interview: Will Hillary Clinton Flip-Flop Again on TPP After Election Day? We Ask Her Adviser Joseph Stiglitz

StoryJun 15, 2015As Democrats Walk Out on Obama’s TPP Deal, Where Does Presidential Candidate Hillary Clinton Stand?

AMY GOODMAN: This is Democracy Now!, democracynow.org. We are “Breaking with Convention: War, Peace and the Presidency.” I’m Amy Goodman. We are bringing you two hours, extended coverage, from the Republican convention last week in Cleveland, this week from Philadelphia, the Democratic National Convention. Our guest is Joseph Stiglitz in Part 2 of our conversation with the Nobel Prize-winning economist, Columbia University professor, chief economist for the Roosevelt Institute, author of numerous books, the latest, The Euro: How a Common Currency Threatens the Future of Europe.

You’re holding a news conference today. What are you calling for? And where are you doing it?

JOSEPH STIGLITZ: Well, we’re doing it here in Philadelphia, the site of the convention. There are going to be a couple messages. The message that I’m going to be talking about is the economic. The main problems facing our economy, our society, are our growing inequality, the fact that the vast majority of our citizens have had stagnant incomes now for a third of a century. Our economy is not working for most citizens. We’re not growing fast enough. And we still haven’t really fixed the underlying sources of instability that caused the 2008 crisis. We could have another crisis.

So, how does Hillary’s program fit in with these major problems? Well, if you look at it, it’s a fairly comprehensive program. It deals with some of the, you know, you might say, the obvious problems—the banking sector, dealing both with the shadow banking system, the “too big to fail” banks, regulating the banks, going well beyond Dodd-Frank, protecting what we got before, but, you know, as opposed to rollback that the Republicans, but we need a lot more; education, access to education, both pre-school and, very important, access to college education. The system that we have is broken—$1.3 trillion student debt, people graduating with this burden of debt, making access less and less affordable in a world where, if you don’t have access, your prospects are really, really going down. We need growth. And that’s where her infrastructure program.

But it’s more than that. The private sector in the United States has been very focused on short-termism. And that’s partly because of the financial sector, but also because of our whole structure of corporate governance. And there are a set of proposals that are reforms that would at least move our economy to a more long-term perspective. So those are just a few of the things. It’s a broad agenda. And maybe that’s one of the problems. We have a lot of problems, and there’s no magic bullet.

AMY GOODMAN: What do you think has been President Obama’s biggest mistake?

JOSEPH STIGLITZ: I think his two biggest mistakes are pushing TPP and not pushing the financial sector reform as far as he should have, could have.

AMY GOODMAN: Why do you think he didn’t?

JOSEPH STIGLITZ: Well, I think he made a critical mistake very early on in the administration, and this really set a very important issue. He appointed the wrong secretary of treasury and economic advisers, people that were, you might say, part and parcel of creating the deregulation—you know, deregulation, one that was too closely connected with the financial sector. And the result of it is—you know, sometimes you call in the plumber who made the mistake, because he knows more about the plumbing, but it’s too—more likely he’s going to do a patchwork rather than calling in somebody new and who says, “Look at, you’ve got to get a new plumbing system.” And that’s what we needed. We needed much more substantial reforms in our banking system—in our financial system.

AMY GOODMAN: You wrote a piece on Brexit, “From Brexit to the Future.” You draw an analogy between the Brexit vote and developments here, especially in the Republican Party. Explain.

JOSEPH STIGLITZ: Well, both of them are motivated, I think, at least in part, by the fact that large fractions of the population are not doing very well. They’re angry. And in some sense, they’re rightfully angry. In the United States, we began an experiment a third of a century ago—similar experiment in U.K.—where what we did is we lowered tax rates on the top, we liberalized, we rewrote the rules of the market economy in ways that led to more inequality, in the promise that everybody would benefit because the size of the pie would get so much bigger. It didn’t work. It failed. And the result of it was, what was promised wasn’t delivered. And trade liberalization was supposed to bring all these gains. Financial liberalization was supposed to bring the gains.

What did we see from financial liberalization? The crisis of 2008. What they are observing from trade liberalization is their jobs have been lost to factories abroad. And so, there’s understandable anger. And then they ask—we had elections after the crisis in 2008. What happened? Well, in response to the crisis of 2008, the bankers were helped, but ordinary citizens were not. And the reforms, the change, that everybody hoped, on both sides of the Atlantic, that were going to fix the problems didn’t. And so, there’s anger, there’s lack of trust and a strong sense that our system is rigged. And you know what? I think they’re right.

AMY GOODMAN: Joe Stiglitz, I want to thank you for being with us. Joe Stiglitz is a Nobel Prize-winning economist, Columbia University professor, adviser to Hillary Clinton and chief economist at the Roosevelt Institute. His new book, coming out next month, The Euro: How a Common Currency Threatens the Future of Europe.

This is Democracy Now! We’re “Breaking with Convention: War, Peace and the Presidency.” I’m Amy Goodman.

As Democrats Walk Out on Obama’s TPP Deal, Where Does Presidential Candidate Hillary Clinton Stand? 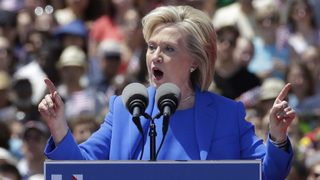 As Democrats Walk Out on Obama’s TPP Deal, Where Does Presidential Candidate Hillary Clinton Stand?