Iraqi Exile: U.K. Iraq Inquiry Confirms the War Was Based on a Lie

In Iraq, the death toll from Saturday’s car bombing in Baghdad has topped 250, making it the deadliest car bombing in Iraq since the 2003 U.S. invasion. While Iraq is in a state of mourning, a long-awaited British inquiry into the Iraq War has just been released. It blames former British Prime Minister Tony Blair for deliberately exaggerating the threat posed by Saddam Hussein in the lead-up to the Iraq War. We speak with Iraqi exile Sami Ramadani, who campaigned against U.S.-led sanctions and the invasion and occupation of Iraq.

JUAN GONZÁLEZ: In Iraq, the death toll from Saturday’s car bombing in Baghdad has topped 250, making it the deadliest car bombing in that country since the 2003 U.S. invasion. The massive blast targeted shoppers preparing for the Eid, marking the end of Ramadan. A fire then spread to nearby buildings. On Sunday, a local resident decried the bombing.

AMY GOODMAN: While Iraq is marking a third day of mourning, a long-awaited British inquiry into the Iraq War has just been released. The chair of the official inquiry, Sir John Chilcot, announced the key findings earlier today.

JOHN CHILCOT: We have concluded that the U.K. chose to join the invasion of Iraq before the peaceful options for disarmament had been exhausted. Military action at that time was not a last resort. We have also concluded that the judgments about the severity of the threat posed by Iraq’s weapons of mass destruction, WMD, were presented with a certainty that was not justified. Despite explicit warnings, the consequences of the invasion were underestimated. The planning and preparations for Iraq after Saddam Hussein were wholly inadequate. The government failed to achieve its stated objectives.

JUAN GONZÁLEZ: The Chilcot report goes on to blame former Prime Minister Tony Blair of deliberately exaggerating the threat posed by Saddam Hussein. Part of the report includes private correspondence between Blair and President George W. Bush. Eight months before the invasion, Blair wrote to Bush, quote, “I will be with you, whatever.” In June 2003, less than three months after the invasion began, Blair privately wrote to Bush that the task in Iraq is, quote, “absolutely awesome and I’m not at all sure we’re geared for it.” Blair added, quote, “And if it falls apart, everything falls apart in the region.” Earlier today, members of the Stop the War Coalition gathered in London to read off the names of Iraqis killed since the U.S.-U.K. invasion.

AMY GOODMAN: To talk more about the state of Iraq today and the newly released Chilcot inquiry, we’re joined by two guests in London. Tariq Ali is a political commentator, historian, activist, filmmaker, author, editor of the New Left Review. His most recent book, The Extreme Centre: A Warning. Sami Ramadani is an Iraqi-born lecturer in sociology. He was a political exile from Saddam’s regime and serves on the steering committee of Stop the War Coalition.

Tariq Ali and Sami Ramadani, welcome to Democracy Now! Sami Ramadani, let’s begin with you. You’re an Iraqi exile. You live in London. The Chilcot report has just come out. Prime Minister Cameron has addressed it on the floor of the Parliament. Sir Chilcot has given this report. Talk about his findings. This has been, what, seven years in the making.

SAMI RAMADANI: Basically, I think the Chilcot report, from what I have just read briefly about it, it seems it has confirmed what many of us thought. Overwhelmingly, Iraqis and Middle Easterners and people across the world felt, long before the war started, actually, that this buildup to the war was being based on false evidence, on exaggerated evidence, on lies. And the Chilcot report, I think, confirms this. It brings into the open more evidence to prove that point. So, to that extent, it has not brought something radically new, but it has confirmed—and that is important—it has confirmed what we all knew, that the Iraq War was based on a lie and that it was predetermined.

And I think it was on your program that General Wesley Clark was interviewed, I think, by yourself, Amy—

SAMI RAMADANI: —that the Pentagon decided, within days of 9/11, to have regime change, interventions and wars in seven countries, in addition to Afghanistan, and he named Iraq, Syria, Lebanon, Libya, Somalia, Sudan and, finishing off, Iran. So, you’re looking at a scenario where, since the mid-1990s, the so-called neocons plotted a strategy, following the collapse of the Soviet Union, to go on the offensive and topple regimes and expand and secure important oil resources and raw materials, cut down any rival competitions.

But in the meantime, Iraq, as a society, as a state, was destroyed in the cruelest of fashions—shock and awe, mass crimes on an untold scale since World War II and the Vietnam War, of course. So you have a situation where a society—though we had a dictator ruling, it wasn’t removing the dictator that was the real objective, but really controlling Iraq. And failing to control it, they eventually destroyed it, just like they are doing—they did in Libya, they are doing in Syria and so on. And so, it fits in within that scale. But the biggest tragedy of all is the loss of life. Over a million people lost their lives in Iraq. The infrastructure destroyed, the health services destroyed, educational system, employment—at every turn—electricity, clean water. Iraq was a fairly advanced country by Third World standards. All this was destroyed. The ordinary lives of the people were ruined. Sectarianism was encouraged. Divide and rule was encouraged. Terrorism was brought into the country. The terrorism we see today was, in fact, consciously encouraged to encourage divide and rule, so that the U.S.-led occupation—and Britain, of course—could dominate the country and shape its future.

SAMI RAMADANI: But the whole thing is quite tragic, and I find it difficult sometimes even to emotionally control myself, talking about the tragedies that befell the Iraqi people.

Tariq Ali on Chilcot Iraq Report: Tony Blair is a War Criminal for Pushing Us into Illegal War

NEXTTariq Ali on Chilcot Iraq Report: Tony Blair is a War Criminal for Pushing Us into Illegal War 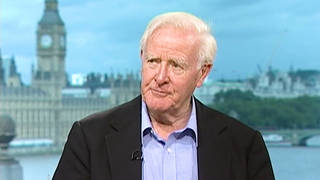