As conflicts from Iraq to Syria have forced a record 60 million people around the world to flee their homes and become refugees, we speak with Scott Anderson about his in-depth new report, “Fractured Lands: How the Arab World Came Apart.” Occupying the entire print edition of this week’s New York Times Magazine, it examines what has happened in the region in the past 13 years since the the U.S. invaded Iraq through the eyes of six characters in Egypt, Libya, Syria, Iraq and Iraqi Kurdistan. Anderson is also author of the book, “Lawrence in Arabia: War, Deceit, Imperial Folly and the Making of the Modern Middle East.”

AMY GOODMAN: We’re talking with Scott Anderson. The New York Times did something very unusual this weekend, coming up. The entire issue of The New York Times Magazine is devoted to one article, well, which is divided into a number of parts. It’s called “Fractured Lands: How the Arab World Came Apart.” Scott Anderson’s most recent book is called Lawrence in Arabia: War, Deceit, Imperial Folly and the Making of the Modern Middle East. Juan?

JUAN GONZÁLEZ: What did you—what did you learn from those interviews and from his story?

SCOTT ANDERSON: There was an amazing pattern. As you say, I interviewed probably just around 20 ISIS fighters, all in prison either in Iraq or in Kurdistan now. The one pattern I found over and over again was that these were—they were all young men, kind of with very bleak futures, either unemployed or underemployed, from working-class families, and not religious at all. None of these—according to them, they were not from religious families. They did not know the Qur’an very well. In a couple of cases, I knew the Qur’an better than they did. They were not recruited in mosques. They joined because their buddies joined, I mean, you know, because they saw stuff on social media. They’ve all—you know, everybody has mobile phones in that part of the world. And they’ve all—they had all seen the ISIS videos. And I think it was this kind of decision that young men make, that better to live large for a couple of years, and, you know, the power and the so-called glamour of—but the power that comes of carrying a gun, and then, you know, worry about what happens in the future two or three years down the road. So, I felt it was—certainly, in my experience, of these kind of foot soldiers, the grunts—they were primarily the ISIS members I’ve talked with—they had more akin to why somebody might join like an inner-city gang or why in Mexico they might join a narco gang. It’s this kind of despair at seeing any sort of future. But it’s not political, it’s not religious. It’s just this impulse to—you know, to have some sort of—I mean, it’s awful to say, in terms of ISIS, but adventure.

JUAN GONZÁLEZ: But that’s a quite different perspective from what we get here—

JUAN GONZÁLEZ: —that these are religious zealots who are willing to die for Islam.

SCOTT ANDERSON: That’s right. No, it’s very different. And like a lot of cults, what ISIS—you mentioned like the character, the subject of the article, Wakaz Hassan. He joined up—he was brought in by his older brother. Wakaz at that time was 19, his brother was 26. Part of his basic training was to execute six different prisoners of ISIS on six different occasions. So, it was this kind of brutalizing process where they brought him out of the barracks and he was told he had to shoot somebody in the back of the head, on six different times. And he was—at this point, he’s in. It’s like being in a cult, and now you’re there. And at least in his view, there was no way to get out once he had signed up.

AMY GOODMAN: You have an amazing part of the end of part one of your article. It’s in October 2002. This was right around the time the U.S. Congress voted to authorize war. Hillary Clinton voted to authorize the invasion of Iraq. You interviewed Muammar Gaddafi, and you asked him who would benefit if the Iraq invasion actually occurred. You write, “The Libyan dictator had a habit of theatrically pondering before answering my questions, but his reply to that one was instantaneous. 'Bin Laden,' he said. 'There is no doubt about that. And Iraq could end up becoming the staging ground for Al Qaeda, because if the Saddam government collapses, it will be anarchy in Iraq. If that happens, actions against Americans will be considered jihad.'”

AMY GOODMAN: These are the words of the Libyan leader, who ruled for what? Like 42 years.

AMY GOODMAN: You interviewed him.

AMY GOODMAN: Talk about that.

SCOTT ANDERSON: Yeah, he was—he was absolutely prescient of what was going to happen in Iraq. I had been trying to get an interview with Muammar Gaddafi for almost three years. And I finally got it, I’m convinced, because, by October, by the autumn of 2002, the drumbeat for war in Iraq was really building. I mean, it seemed pretty clear that the antiwar demonstrations were not going to have an effect: We were going in. And Gaddafi was worried that he was going to be next, that after the Bush administration overthrew Saddam Hussein, that they were going to come after him. And the Bush administration had already been floating that out. They had a hit list. And, you know, Gaddafi was on there. Then Assad was somewhere down the list, because he—you know, in Syria, they weren’t the full-fledged axis of evil, but they were rising up. So, yes, so I went and spent three weeks in Libya and interviewed Gaddafi. And he was absolutely right. Everything he predicted came true to the tee.

AMY GOODMAN: Did he talk about what would happen to him?

SCOTT ANDERSON: No, no. And the interesting thing—a very interesting thing is—one of the most memorable things in the interview is I—it was almost my last question to him, and it was kind of a platitude in this question. I said, “How would you like to be remembered?” And he was so comfortable in the interview and so kind of arrogant about his position in Libya. He started off giving this kind of very, very platitudinous answer. It was like, “Well, you know, I would hope to be remembered as selfless, you know, that I gave to my people, that”—you know, just these kind of throwaway answers. And then he kind of paused for a second, and he chuckled, and he leaned towards me, and he said, “And I hope this is actually really true.” You know, in other words, maybe it’s always just been all about me, anyway. So, no, he had no—I don’t think he had any clue that—what was coming. Nor did—you know, I think, over and over again, I don’t think Hosni Mubarak, right up 'til the day he had to resign, he ever thought he was going to go. I think it's part of the nature of these kind of personality cults these dictators build around themselves, that they’re so inoculated that they’ve just really lost touch with reality.

JUAN GONZÁLEZ: I wanted to ask you the bigger question that you try to tackle here: What went wrong with the Arab Spring? Because we’re in a situation right now where, both in Europe and in the United States, people are faced with this enormous, one, refugee problem—

JUAN GONZÁLEZ: —out of the Middle East and, two, these failed states, including Yemen, which we haven’t talked about at all.

JUAN GONZÁLEZ: And yet, there’s no connection made between growing intervention from Europe and the United States is leading to more destabilization rather than less—

JUAN GONZÁLEZ: —and how you get out of that situation.

SCOTT ANDERSON: Yeah, it’s very hard. If there’s any consolation in the current situation, I think we’re kind of near the—we’re near the bottom of how bad it can get. It’s hard to see how places get much worse, although Libya is going to get worse next year, because, along with the kind of division between different militias, you’re also headed for an economic crash that’s coming in Libya next year. They’re going to run—they’re just running out of money. It’s hard to see how Syria gets worse. It’s hard to see really how Iraq gets worse.

But I think that—so, it’s very hard to see what an intervention actually looks like. You know, I’ve often thought, well, you know, what is the Obama administration’s foreign policy in the region? And I don’t think it really has one. I think it’s utterly reactive at this point. But then it’s hard to imagine what a proactive policy in the region would actually look like. I mean, what do you do in a place like Syria? I mean, at least in Iraq, you’ve—there now seems to be kind of an operating coalition against ISIS. But I think the problem—and I personally feel that, militarily, ISIS is going to be pretty much destroyed in the near future. But ISIS is not just a military—it’s not a guerrilla group anymore. It’s an idea. And as I was talking about these young men, you know, you have millions and millions of young men throughout the Middle East with no economic futures, who are not necessarily religious or even political in any way, but also what you have throughout the region is a kind of a built-in resentment against the West. So, that whole breeding ground is just going to continue on, and I don’t see how you deactivate that.

AMY GOODMAN: Well, we want to thank you very much for being with us.

AMY GOODMAN: Any word to the wise on how to read this entire issue, which also has a virtual reality tour of the retaking of Fallujah with Iraqi soldiers?

SCOTT ANDERSON: Right, right. You know, I don’t know. It’s hard for me to say how to—because it’s been my baby for a year and a half now, I don’t know how really to suggest how to treat it. You know, I think, like any—it’s the story of—you know, the six stories are kind of interwoven. And I think maybe to find the stories that—I think different stories will resonate with different people. I’m going to stay with that.

AMY GOODMAN: Well, I want to thank you, Scott Anderson, who has written this remarkable total issue of The New York Times Magazine called “Fractured Lands: How the Arab World Came Apart.” In print, it occupies the whole issue.

That does it for our broadcast. A very special congratulations to Dave Enders and his wife Monica. Their new baby, Sophie Grace, welcome to the world. 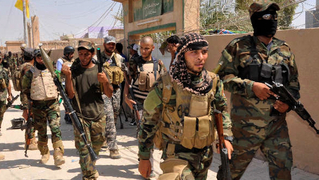