Republican presidential nominee Donald Trump invoked the Cold War as he pledged to wage war against what he described as the “ideology of radical Islam” during a speech in Youngstown, Ohio, on Monday. Trump also vowed to institute “extreme vetting” of visa applicants. He also said he’d create a commission on radical Islam, keep Guantánamo Bay open and stop trying people accused of terrorism in civilian courts. For more, we speak with Matt Taibbi, award-winning journalist with Rolling Stone magazine. We also speak with Phyllis Bennis, author of “Understanding ISIS and the New Global War on Terror.” And we speak with Linda Sarsour, director of the first Muslim online organizing platform, MPower Change, and co-founder of the Muslim Democratic Club of New York.

AMY GOODMAN: On Monday, Republican presidential nominee Donald Trump invoked the Cold War as he pledged to wage war against what he described as the “ideology of radical Islam.” During a speech in Youngstown, Ohio, Trump vowed to institute “extreme vetting” of visa applicants.

DONALD TRUMP: In the Cold War, we had an ideological screening test. The time is overdue to develop a new screening test for the threats we face today. I call it extreme vetting. I call it extreme, extreme vetting. Our country has enough problems. We don’t need more. And these are problems like we’ve never had before. In addition to screening out all members of the sympathizers of terrorist groups, we must also screen out any who have hostile attitudes toward our country or its principles, or who believe that Sharia law should supplant American law. Those who do not believe in our Constitution or who support bigotry and hatred will not be admitted for immigration into our country. Only those who we expect to flourish in our country and to embrace a tolerant American society should be issued visas. To put these new procedures in place, we will have to temporarily suspend immigration from some of the most dangerous and volatile regions of the world, that have a history of exporting terrorism.

AMY GOODMAN: Donald Trump also said he’d create a commission on radical Islam, keep Guantánamo open and stop trying people accused of terrorism in civilian courts. He had initially called for a temporary ban on all Muslim immigration, before shifting to a ban on those from countries with a history of terrorism. While his campaign has declined to offer specifics on which countries would qualify, Trump said Monday that his State Department and Department of Homeland Security would decide which regions would qualify, based on whether adequate screenings could take place.

For more, we’re joined by three guests. Matt Taibbi, award-winning journalist with Rolling Stone magazine, has been closely covering the Trump campaign. His most recent piece is headlined “The Summer of the Shill.” Phyllis Bennis is a fellow at the Institute for Policy Studies. She’s written several books, including, most recently, Understanding ISIS and the New Global War on Terror. And Linda Sarsour is with us. She’s director of the first Muslim online organizing platform, MPower Change, and co-founder of the Muslim Democratic Club of New York.

We welcome you all to Democracy Now! Linda, let’s begin with you. Your response to Donald Trump’s proposal for “extreme vetting,” as he calls it?

LINDA SARSOUR: I mean, it’s a continuation of his ludicrous policy proposals. I’m a person who has been working with refugees, asylees in New York City for 15 years. He has no idea the vetting process that immigrants go through before they come to the United States. And he’s taking us back to the 1950s, McCarthy era, this idea of creating a committee on radical Islam. Who is going to set the standards for what that looks like? And when he talks about testing immigrants around those—only those who will flourish in this country or those who believe in American values, who’s going to set what those American values are? Donald Trump? The fact that Rudy Giuliani was even anywhere near this, the fact that Rudy Giuliani could be the next head of the Department of Homeland Security, scares me more than Donald Trump. So, I wasn’t shocked or surprised, but the fact that we have gotten to this point and that our country is allowing a man of this caliber to be running for the highest office of this land is absolutely outrageous.

MATT TAIBBI: Yeah, I mean, I think the speech was crazy, as a lot of Trump’s speeches are. Clearly, he’s backed off slightly from the “let’s ban all Muslims” idea that he unleashed last year, and he’s just rebranding it as “extreme vetting,” probably because he realized the idea of banning all Muslims is unconstitutional, because it would violate the Establishment Clause of the Constitution. But this idea that he thinks that returning to the McCarthy era and having an ideological test and rooting out un-American activities—

AMY GOODMAN: Well, let’s talk about that, an ideological test.

MATT TAIBBI: Yeah, well, he’s very clearly, openly invoking the Cold War era as though McCarthyism was a good idea. I think most Americans would look back at that period in our history with shame and regret. And Trump seems to think, and probably some of his voters think, that it’s something that we should go back to. And it’s remarkable that he thinks that this would be a winning political idea in an electoral season.

PHYLLIS BENNIS: You know, Amy, I think this point about the link with the McCarthy period is very crucial. What he’s really calling for is a return of HUAC, the House Un-American Activities Committee, that so infamously was involved in destroying so many people’s lives with false allegations of being fellow travelers or members of the Communist Party, with exactly this kind of extreme vetting that kept out immigrants, but also went after residents and citizens in this country. So this notion of establishing a new—what he called a commission on radical Islam, when I saw those words, I thought, “Oh, my god, this is a return to HUAC,” to the House Un-American Activities Committee, which famously continued until the very end, when it was finally brought down by shame when one of the officials turned to one of the prosecutors and said, “Have you no shame, sir?” It was, you know, this moment of ending this extraordinary repressive example of what that period was.

And here he is essentially equating the global war on terror, for which he really has very much the same kinds of policies that are being imposed now, with a few differences, keeping—of asserting keeping Guantánamo Bay prison open instead of hoping to close it, even though it remains open. So, there’s not a lot of difference in the actual policies. But what Donald Trump’s speech tried to do was to assert that this question of terrorism, which is something that is affecting a wide range of regions around the world, certainly, but has not come close to the question of the risks of World War II—when he talked about comparing it to the war against fascism, the war against Nazism, this is a ludicrous comparison. And yet he’s talking about establishing the same kind of response, meaning this ideological test, this notion of extreme vetting. It’s as if he’s asserting the value of extremism as the reason people should support his candidacy, because he’s an extremist.

AMY GOODMAN: It’s interesting, the words he used are sometimes words that are leveled against him. Let’s go back to just a clip of what he said.

DONALD TRUMP: Those who do not believe in our Constitution or who support bigotry and hatred will not be admitted for immigration into our country.

LINDA SARSOUR: I mean, I—that was literally like a comedy show. I thought it was like Saturday Night Live. I mean, he’s the first person to be deported. He’s the first person—I’d sign his deportation proceeding, to be at the airport waving him goodbye. He’s running a campaign on the very things that he’s saying he’s going to fight against—bigotry, hatred. He’s talking about taking down fascism and then comparing what he wants to do to the era of taking down fascism. He is an American fascist, and this is what his campaign has been all about.

And again, the scariest part of it, again, is not Donald Trump; it’s the people that come to his rallies and cheer him on in that room, and the people that think that his ideas are good ideas. And you know this, Amy. If there was a committee on radical Islam, you and I would be the first targets. This idea that anyone that criticizes the U.S. government, anyone who is considered unpatriotic, we would be the first people to be targeted. So, we are—he’s creating an environment of law and order. He wants to keep everybody in line. If you don’t agree with Donald Trump and his supporters, you are not welcomed here. So, that’s a big portion of the American people. So, hopefully—I’m just hoping he’s not the next president of the United States.

AMY GOODMAN: Well, we’re going to go to break and then come back to this discussion and expand it to what he said about—and the recent reports on Russia, talk about Iraq, Iran. We’re talking with Linda Sarsour, Matt Taibbi and Phyllis Bennis. Linda is director of the first Muslim online organizing platform, MPower Change. Matt Taibbi, a Rolling Stone reporter. And Phyllis Bennis is with the Institute for Policy Studies. This is Democracy Now! Back in a minute. 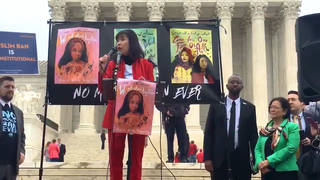