Editor’s Note: On Nov. 13, President-elect Donald Trump named Steve Bannon his top policy advisor. This interview was conducted on Aug. 24 shortly after Trump named Bannon to be his chief strategist and senior counselor.

Last week, Donald Trump once again upended his campaign team and named Stephen Bannon, the head of Breitbart Media, to be his campaign chief. Breitbart regularly sparks controversy with headlines such as “Birth Control Makes Women Unattractive and Crazy,” “Trannies Whine About Hilarious Bruce Jenner Billboard” and “Bill Kristol: Republican Spoiler, Renegade Jew.” In a new article published by Mother Jones, investigative journalist Sarah Posner writes, “By bringing on Stephen Bannon, Trump was signaling a wholehearted embrace of the 'alt-right,' a once-motley assemblage of anti-immigrant, anti-Muslim, ethno-nationalistic provocateurs who have coalesced behind Trump and curried the GOP nominee’s favor on social media.” For more, we speak to Sarah Posner and Heather McGhee of Demos.

StoryOct 04, 2016A Trump Presidency Could End Press Freedom, Say Reporters Threatened for Reporting on His Taxes

AMY GOODMAN: This is Democracy Now!, democracynow.org, The War and Peace Report. I’m Amy Goodman, as we turn to look at “How Donald Trump’s New Campaign Chief Created an Online Haven for White Nationalists.” That’s actually the headline of a new article in Mother Jones by investigative journalist Sarah Posner, who has closely followed right-wing movements for years. The piece looks at Trump’s new campaign chief, Stephen Bannon, who until last week headed the right-wing website Breitbart Media.

In her piece, Sarah Posner writes, quote, “By bringing on Stephen Bannon, Trump was signaling a wholehearted embrace of the 'alt-right,' a once-motley assemblage of anti-immigrant, anti-Muslim, ethno-nationalistic provocateurs who have coalesced behind Trump and curried the GOP nominee’s favor on social media,” unquote.

Criticism of Breitbart Media has grown over the past year. Southern Poverty Law Center recently said, quote, “Over the past year however, the outlet has undergone a noticeable shift toward embracing ideas on the extremist fringe of the conservative right. Racist ideas. Anti-Muslim and anti-immigrant ideas—all key tenets making up an emerging racist ideology known as the 'Alt-Right.'”

Even former Breitbart employees have spoken out. The site’s former editor-in-chief, Ben Shapiro, recently wrote, quote, “Breitbart has become the alt-right go-to website, with [Milo] Yiannopoulos pushing white ethno-nationalism as a legitimate response to political correctness, and the comment section turning into a cesspool for white supremacist mememakers.”

Well, to talk more about Breitbart, Stephen Bannon and the Trump campaign, we’re joined by Sarah Posner, and still with us is Heather McGhee of Demos.

Sarah, welcome to Democracy Now! Why don’t you start off and talk about what you found?

SARAH POSNER: Well, I was covering alt-right activities at the Republican National Convention in Cleveland last month. And that’s where I encountered a couple of times Milo Yiannopoulos, who is the site’s technology editor and the principal link between Breitbart and activists on the alt-right, activists that Yiannopoulos has explicitly embraced. And I also met and talked to Stephen Bannon, who was, at the time, the head of Breitbart and is now the CEO of Trump’s campaign.

Now, I asked him specifically about Ben Shapiro, who you discussed, who previously was an editor at Breitbart, who’s emerged as one of the site’s leading critics and who has been attacked on social media by anti-Semites tweeting—you know, just tweeting like horrible things at him and saying things about him and his family. And I asked Bannon about that hate that’s been directed at his former employee. And he dismissed it, calling Shapiro a whiner.

And this is why they’ve been cheered by Trump’s candidacy, because they see him as a candidate who’s abandoned the traditional GOP, who scoffs at movement conservatism and, in fact, embraces their issues, is willing to talk about building a wall, who’s willing to talk about race in the way that Trump talks about race, who’s willing to break with GOP orthodoxy on trade deals. These are all things that have led the alt-right into the Trump camp. And a lot of it has to do with the ways in which he has rejected GOP and movement conservatism orthodoxy.

AMY GOODMAN: I wanted to go to Donald Trump speaking in Dimondale, Michigan, a largely white suburb of Lansing.

HEATHER McGHEE: You know, we’ve been clear, I think, many of us in the African-American community, that Donald Trump was going to make an appeal to the black vote. He was very quick to attack Mexicans, Latinos, immigrants, very quick to attack Muslim Americans, but actually has been somewhat more reticent. And we have all been sort of anticipating this moment when he would try to divide and conquer among people of color, and say to working-class black men, particularly, that immigrants are coming to take their jobs.

You have to remember that Donald Trump—speaking of the alt-right, Donald Trump was the loudest and, as he has in many—with many racist ideas, the most effective mainstreamer of the idea that the first African-American president was not actually born here, is not a U.S. citizen, and therefore not a legitimate president. That’s not something that the black community forgets. We also—

AMY GOODMAN: That Donald Trump was a leader of the birther movement—

HEATHER McGHEE: Yes. We also don’t forget that the way that he sort of burst onto the scene in New York was as a slumlord who was forced to settle massive discrimination claims against African-American tenants. So, Donald Trump has very little support in the African-American community. Some polls say it’s 1 percent, some polls say it’s zero. And they understand what he is doing. Even more importantly than what Donald Trump is, it’s what he is doing to reinvigorate white supremacy in this country. Even if Donald Trump is defeated on Election Day—which I don’t think is a given, right? Polls do not vote. We do not actually have Election Day by random dialing surveys. People do have to actually come out and vote, which is not necessarily a given right now. Even if he’s defeated, the unmasking of American racism, the mainstreaming of these ideas, is going to be with us the day after Election Day. The African-American community is very aware of that.

AMY GOODMAN: Even Indiana governor, the vice-presidential running mate of Donald Trump, is aware of this. He was being questioned on Fox by the Fox News host Ainsley Earhardt about Donald Trump’s claim that he could get to something like 95 percent of the African-American vote by 2020.

AINSLEY EARHARDT: Why are you laughing?

AMY GOODMAN: So, there is Governor Pence just laughing. So, talk more, Sarah Posner, expanding on what Heather McGhee has said, about what Donald Trump has—is doing with this alt-right.

SARAH POSNER: I think, on the one hand, he’s embraced the alt-right, either explicitly—by hiring Bannon, obviously—but also implicitly. There’s a lot of wink-wink at the alt-right, particularly in the way that Trump uses his Twitter account and some of his surrogates use their Twitter account. But I think, at the same time, he’s trying—and I think that this is completely going to be completely transparent to the African-American community and to African-American voters—he’s trying to pretend that he’s got a strategy for reaching out to black voters and that he’s—and that he has a prayer of reaching out to black voters. So—

AMY GOODMAN: Let me interrupt and ask you something. Some are saying that this whole presidential election that he is involved with is actually a strategy for developing Trump TV, that he is consolidating a media leadership here with Bannon, with Roger Ailes, who is now forced out because of sexual harassment allegations by more than 20 women from Fox and now is reportedly advising Donald Trump. How significant is this possibility?

SARAH POSNER: Well, I’ll just caveat my answer by saying I haven’t done any independent reporting on the prospects of this media outlet. But if this is something that Trump does in fact have in mind, you know, the fact that he’s asking Roger Ailes for advice, and was asking Roger Ailes—he was in regular contact with Roger Ailes even before Ailes was forced out of Fox over the sexual harassment lawsuit—and the fact that he’s hired Bannon, and combine that with how, throughout his campaign, Trump has been so disparaging of the mainstream media, the way he calls out individual reporters at his campaign events, calls on his rally attenders to turn around and scoff at and disparage the media that’s covering the rally from a press pen, all of this points to—and also that he—how he talks about the unfairness of the way the media covers him, and almost setting the stage for blaming the media if he loses. So, if you put all of this together, regardless of what Trump actually does organizationally in terms of creating a media outlet after the—if he were to lose the presidency, after the campaign, it seems pretty evident that there’s a lot of sowing of discontent about the mainstream media, and a bolstering of these alternative media sites that have been supportive of Trump and supportive of the alt-right.

AMY GOODMAN: We’re going to have to leave it there. Sarah Posner, most recent piece, we’ll link to, “How Donald Trump’s New Campaign Chief Created an Online Haven for White Nationalists,” and Heather McGhee, president of Demos, thanks so much.

A Trump Presidency Could End Press Freedom, Say Reporters Threatened for Reporting on His Taxes 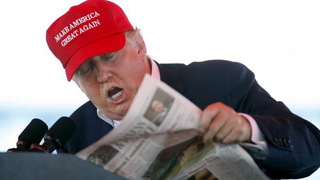 A Trump Presidency Could End Press Freedom, Say Reporters Threatened for Reporting on His Taxes