Debate: Should the Clinton Foundation Be Shut Down If Hillary Clinton Wins?

According to a new report in The Wall Street Journal, if Hillary Clinton wins the presidency, the Clinton Foundation will stop accepting corporate and foreign donations—although an exception may be made for the Clinton Health Access Initiative. The Journal also reports that former President Bill Clinton will leave the board, but that Chelsea Clinton plans to stay on it. But some have called for the Clinton Foundation to be shut down entirely if Clinton wins. For more, we speak to David Sirota, the senior editor for investigations at the International Business Times. His most recent article is titled “Was There 'Pay to Play' at the Clinton Foundation?” We also speak with Paul Glastris, editor-in-chief of the Washington Monthly. He was President Bill Clinton’s chief speechwriter from 1998 to 2001.

StoryOct 31, 2016The October Surprise: Michael Isikoff on the FBI’s Clinton Email Investigation That Could Jolt Race

AMY GOODMAN: We continue our debate on Hillary Clinton and the Clinton Foundation. On Tuesday, the Associated Press published a new investigation revealing that while Clinton served as secretary of state, more than half the private citizens she met with had donated to the Clinton Foundation. Republican presidential nominee Donald Trump has accused her of selling access. Last night, Clinton called into CNN’s AC360 with Anderson Cooper.

HILLARY CLINTON: What Trump has said is ridiculous. My work as secretary of state was not influenced by any outside forces. I made policy decisions based on what I thought was right to keep Americans safe and to protect U.S. interests abroad. The foundation is a charity. Neither my husband nor I have ever drawn a salary from it. You know more about the foundation than you know about anything concerning Donald Trump’s wealth, his business, his tax returns.

AMY GOODMAN: Speaking in Ohio this week, Donald Trump urged the Justice Department to appoint a special prosecutor to investigate if donors to the Clinton Foundation got special treatment from the State Department.

DONALD TRUMP: The Clintons made the State Department into the same kind of pay-for-play operation as the Arkansas government was. Now, think of what happened back then. Think about it. And I love the state of Arkansas—we’re winning it big. But I’ll tell you, they know what went on. They know, and they’re not happy. Pay the Clinton Foundation huge sums of money and throw in some big speaking fees for Bill Clinton, and you got to play. You got to do what you wanted to do. It’s pretty sad. This is in front of the State Department. This is in front of the State Department. And long before that, you should have seen what they were doing in Arkansas. Same old story, folks. The amounts involved, the favors done and the significant number of times it was done require an expedited investigation by a special prosecutor immediately, immediately, immediately.

AMY GOODMAN: That’s Donald Trump, who himself gave $100,000 to the Clinton Foundation. We’re speaking to two guests: David Sirota, senior editor for investigations at the International Business Times, his most recent piece, “Was There 'Pay to Play' at the Clinton Foundation?” and Paul Glastris, editor-in-chief of the Washington Monthly, President Bill Clinton’s chief speechwriter from ’98 to 2001. A special prosecutor, Paul Glastris, what do you think about that?

PAUL GLASTRIS: Not going to happen. You know, a silly Donald Trumpism. Look, the point I was making before the break is—and I agree with David Sirota—the appearances raise questions. The appearances of these donors, who also have business in front of the State Department, raise questions. We’ve just—speaking of special prosecutor, we’ve just had two deep investigations, sort of like random audits, of whether any of this is true. We have now scores of examples of attempts to gain access, attempts to get favors. In every case that we have on the record, through these investigations, we see that Hillary Clinton and her staff did the right thing.

Does that mean in every case they did the right thing? No. But we know more about Hillary’s State Department and the inner workings of the decisions than we have on almost any Cabinet secretary that one can think of. You know, in the Bush administration, George W. Bush’s administration, his father had the Points of Light foundation. People were giving money to the Points of Light foundation, a charity, not unlike the Clinton Foundation, and we don’t know anything about who gave, what favors were asked for, what access there was, partly because the Bush administration expunged, accidentally, all of its emails, but partly because nobody ever asked those questions.

AMY GOODMAN: Well, let me—let me put—let David Sirota respond. And as we wrap up, what should happen to the Clinton Foundation if Hillary Clinton were to become president, David Sirota?

DAVID SIROTA: Well, a special prosecutor, I agree, I don’t think it’s going to happen. I mean, the Obama administration has barely—hasn’t prosecuted Wall Street after the financial crisis. The FBI said—had raised questions about what it found with the Clinton Foundation, didn’t move forward. So, I think, politically, the idea of the Obama administration investigating Hillary Clinton and Bill Clinton is just not going to happen.

But there are still a lot of issues swirling around. I mean, the other issue, outside the foundation, is, you know, Bill Clinton was paid millions of dollars from companies, personally, for speaking engagements, at the very same time these companies were lobbying the State Department. A special prosecutor is the only real way to get subpoena power to uncover and find out what really fully happened. And Paul mentioned that there were investigations, but that didn’t have subpoena power, and you’re sort of at the mercy of Freedom of Information Act requests that the Obama administration itself has power over.

DAVID SIROTA: Will a special prosecutor happen? We don’t know.

AMY GOODMAN: And Paul’s point that George H.W. Bush also had a foundation when his son was president?

DAVID SIROTA: Look, certainly, this is an issue that has existed for a long time. And I think a lot of people in the public are saying at least it’s a good thing that there’s more scrutiny happening on this set of issues, presidential foundations and the like. And it’s going to be interesting to see what happens moving forward.

You asked what’s going to happen to the Clinton Foundation. I’m a journalist. I don’t think—I don’t kind of offer up what I think should happen. I think there are folks out there, critics on the Republicans, maybe purely opportunistic partisans, if you will, saying that it should be shut down. There is going to be—the Clintons have agreed to this—an effort to effectively unwind the foundation to try to preserve what it does that’s good, but unwind and extricate their relationships from it. I think that’s likely to happen in some way, although The Washington Post, I believe, reported that the policy they’ve put out, the promises they’ve made, will not fully end all the kinds of donations that are at issue here that we’re discussing today.

AMY GOODMAN: And, Paul Glastris, do you think it should shut down or President Clinton should step down from the board, the discussion now that Chelsea Clinton would remain on the board?

PAUL GLASTRIS: Well, you know, I’m a little melancholy about the whole thing, because this is, you know, a spectacularly successful organization at helping millions and millions of deserving poor people around the world. And you extricate the Clintons from that, you extricate the political juice and energy and vision behind that, so it won’t be the same organization that it was before. And I think that’s why the Obama administration thought, you now, it was OK and the right choice to keep it going, to allow what happened to happen. But given all these questions, I suppose it’s really the only sensible thing. And I don’t know if, you know, it makes sense for Chelsea to run it or not. I haven’t really thought that through. So, if she’s going to be president of the United States, yes, I think it probably should be wound down, as David said, and some—you know, the best parts kept going. I’m just a little sad about it, because it’s done a tremendous amount of good.

AMY GOODMAN: Well, we’re going to leave it there but continue to follow this issue. I want to thank Paul Glastris, editor-in-chief of the Washington Monthly, former President Bill Clinton speechwriter. And David Sirota, we will link to your pieces at the International Business Times.

This is Democracy Now! When we come back, Bernie Sanders has launched a new organization. There were 2,600 parties last night to hear him speak. We’ll have a debate. Stay with us. 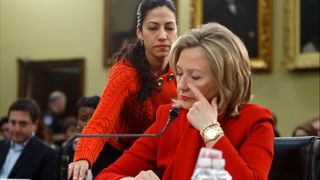 The October Surprise: Michael Isikoff on the FBI’s Clinton Email Investigation That Could Jolt Race