Julian Assange on the Green Party’s Rising Popularity & the November Election: “Anything is Possible”

WikiLeaks founder Julian Assange spoke via video stream to the Green Party convention in Houston, Texas, over the weekend about the Green Party’s rising popularity ahead of the November general election. This comes as CNN’s Poll of Polls shows Stein polling at 5 percent—five times more than the 1 percent of the national vote she won in 2012.

StoryAug 08, 2016WikiLeaks’ Julian Assange: Attacks Against Jill Stein Are “Going to Go Through the Roof”

AMY GOODMAN: This is Democracy Now! We are “Breaking with Convention: War, Peace and the Presidency.” I’m Amy Goodman. We continue our coverage of the Green Party convention in Houston with the party’s 2004 presidential candidate, David Cobb, interviewing WikiLeaks founder Julian Assange.

JULIAN ASSANGE: It is a remarkable moment in U.S. politics. For the Greens, it’s—I mean, the Greens, if they pursue this campaign, as they do seem to be doing so, can and, I believe, probably will produce a very solid bloc after. And I think that’s really heartening. It’s a horrific vision—I mean, who’s going to be U.S. president, next U.S. president, is a horrific vision. I was asked this question: Did I prefer Clinton or Trump? And, I mean, the answer is: Well, you’re asking do I prefer cholera or gonorrhea. I mean, it’s a very sad situation.

But I think, given the reality has always been that the presidency pretty quickly merges with the bureaucracy that is around it, because bureaucracy is enormous, and the corporate lobbyists are enormous compared to the political parties, that actually it could be a net positive to have a president, in the form of Hillary or Trump, probably—who knows? You never know what happens in a campaign. Maybe Jill Stein will be president. Maybe Gary Johnson will be president. No, I’m serious. You never know. Like, it’s—who knows what happens during a campaign? Anything is possible, and you have to be ready for that. But if it is Hillary Clinton or Donald Trump, then that’s a very adverse environment. But the nature of those—I like things to look like what they are. I think Hillary Clinton, in her statements, demeanor and associations and track record, looks like the power that she actually does represent. Similarly with Donald Trump, maybe even—maybe even Donald Trump even looks more like what the power he’ll end up representing than he does actually represent it. But that’s a situation that generates resistance and accountability, and that is what really checks the behavior of government over time. It is the various pressures that exist on the presidency. That’s what checks their behavior. So, these are two characters that are the most unpopular pair of presidential candidates in U.S. history. And going into the presidency, they are going to continue to generate oversight and resistance, which will not only create a fertile field for Gary Johnson and Jill Stein to grow their support, but will create a very fertile field to understand and hold government to account.

DAVID COBB: So take a note, Greens and Americans everywhere, it is social movements that will actually bring corporate America to heel. Julian, Greens—

JULIAN ASSANGE: I mean, I’m here in the United—well, I’m here in Ecuador in the United Kingdom with a pending U.S. prosecution. It’s very strange. I’ve become quite a multijurisdictional creature. But the Corbyn phenomenon in the U.K. really does show that something important, very important, is happening. There is a political moment in the English-speaking world that the Greens should and, it looks like, are seizing upon. It’s a very important moment.

DAVID COBB: I do think that North Americans need to have a little more humility as we look to our sisters and brothers in the Global South, who have been fighting empire for 500 years. They have a more acute understanding of actually social movements and the electoral arm of their social movements, so we should be humble and learn that lesson.

WikiLeaks’ Julian Assange: Attacks Against Jill Stein Are “Going to Go Through the Roof”

NEXTWikiLeaks’ Julian Assange: Attacks Against Jill Stein Are “Going to Go Through the Roof” 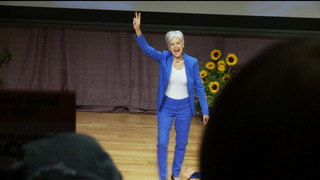 WikiLeaks’ Julian Assange: Attacks Against Jill Stein Are “Going to Go Through the Roof”