The first-ever United Nations Summit for Refugees and Migrants has produced a declaration for 193 member countries to conduct a more coordinated and humane response to the biggest migration upheaval since World War II. We get response from Mohammed Badran, co-founder of Syrian Volunteers in the Netherlands, who spoke at the summit; Manfred Lindenbaum, a Holocaust survivor and advocate for refugees; and Raymond Offenheiser, president of the international humanitarian and development organization Oxfam America.

StorySep 21, 2016Did Obama Host a Summit on Migrants While Ignoring a Refugee Crisis in the U.S.’s Own Backyard?

JUAN GONZÁLEZ: We turn now to the meeting of 193 member states of the United Nations for the first-ever Summit for Refugees and Migrants in New York City. The summit produced a nonbinding declaration detailing a more coordinated and humane response to the biggest migration upheaval since World War II. President Obama used his eighth and final address to the U.N. General Assembly as president to announce a pledge by 50 countries to admit 360,000 refugees from conflict-ridden areas this year. He said world leaders have vowed to double the number from last year.

AMY GOODMAN: A record 65 million people have been displaced by conflicts around the world. This is the first time the number of migrants has topped 60 million. Most have fled to areas within their own countries, largely in Syria and Iraq, but about 21 million refugees have been forced to leave their countries due to conflict or persecution. Nine million people have been displaced by the six-year conflict in Syria alone, while more than 4 million others have fled Syria.

Despite the focus on the influx of refugees in European countries, 86 percent of the world’s refugees are hosted in developing regions close to conflict zones, like Turkey, Jordan and Ethiopia. Speaking Tuesday, President Obama urged wealthy countries to do more to help resolve the global refugee problem.

PRESIDENT BARACK OBAMA: We have to imagine what it would be like for our family, for our children, if the unspeakable happened to us. And we should all understand that, ultimately, our world will be more secure if we are prepared to help those in need and the nations who are carrying the largest burden with respect to accommodating these refugees.

JUAN GONZÁLEZ: President Obama also announced the United States will resettle 110,000 refugees from around the world—a nearly 60 percent increase from 2015.

AMY GOODMAN: For more, we’re joined by three guests. In Washington, D.C., Mohammed Badran is with us, co-founder of Syrian Volunteers in the Netherlands. On Monday, he spoke at the U.N. Summit on Refugees and Migrants.

Here in New York, Manfred Lindenbaum is with us, Holocaust survivor, advocate for refugees. In 1939, Manfred and his brother fled from Germany to Poland and then to England on the famous Kindertransport, just days before the Nazis invaded. In 1946, the Jewish refugee organization HIAS reunited Manfred with an aunt and uncle living in New Jersey. He has been in the U.S. ever since.

Also with us is Raymond Offenheiser, president of the international humanitarian and development organization Oxfam America. The organization is participating in this year’s United Nations General Assembly.

We welcome you all to Democracy Now! Let’s start with Ray Offenheiser. Talk about what has to be done right now. I mean, we are seeing the largest influx of refugees since World War II.

RAYMOND OFFENHEISER: Right. I mean, it’s an unprecedented moment. And I think the urgency was felt by the international community to have this summit. And as you said, basically, the focus was this Declaration for Refugees and Migrants that was basically put together this summer and negotiated the summer, and it was brought to the U.N. General Assembly for approval.

At the heart of the problem, really, is this disproportionate responsibility that’s being felt by the neighboring countries, that—in the way that you mentioned. And the idea of having the summit was, in some sense, to get commitments about burden sharing. Unfortunately, what we found at the end of the day was somewhat of a minimalist approach to the way governments were actually negotiating the final outcome, and so we didn’t get the kinds of burden-sharing commitments that we had hoped for, but rather we got a reaffirmation of commitments to basic principles on the convention of refugees from 1951 and the protocol of 1967, but we didn’t get bold commitments for the kind of burden sharing across, you know, the hosting and non-hosting countries that we hoped would be at the heart of this agreement.

JUAN GONZÁLEZ: And what—and could you be more specific about this burden sharing? Because, clearly, we’re getting all the attention to what is happening to the refugees coming into Europe, and we’re seeing in the presidential debate the battle over how we’re going to deal with people coming to the United States, but what are the countries, and what are the problems faced by the developing countries near the conflict zones?

RAYMOND OFFENHEISER: Well, I mean, I think as we—as you’ve reported in the past, I mean, we’re seeing a country like Lebanon with, you know, literally a million-plus refugees in a country of 4 million, where you’re seeing, you know, comparable numbers, a million and a half or so, in Jordan, a country of 6 million. I mean, imagine that in the state of Massachusetts, literally a million-and-a-half refugees in a state with 6 million population. How would you support that?

These neighboring countries have been extraordinarily generous in providing basic education, basic health services and so forth. The World Bank has actually tried to subsidize some of that. But we’re at a point where these countries are at the breaking point, both socially, politically and economically, in their ability to manage this. So, the international community, in the face of this kind of migration and refugee crisis, has got to begin to develop new systems, new approaches and a more robust way of dealing with this, and particularly the burden sharing across countries. I think one of the key statistics to remember is that the five or six wealthiest countries in the world only host 9 percent of this refugee population.

AMY GOODMAN: In Syria, the U.N. has suspended all aid after its aid convoys were attacked by warplanes outside Aleppo. Oxfam had 9,000 hygiene kits ready to be delivered to Aleppo, but all aid has now been halted?

RAYMOND OFFENHEISER: That’s correct. And the ceasefire is now over, so we’re in a situation where all of that aid, some 31 trucks that were supposed to be getting in, did not get in, and there’s little promise that they will. In our view, this was an outrageous act. I mean, everyone knew that that convoy was on that road. They had been waiting for days for a green light to get in. And then there was an attack, and there was actually a double hit. In other words, the convoy was hit twice on that road. And so, literally, the consequence is all of those people that would have been receiving that aid will not receive it. And there’s little clarity as to what—you know, how we are going to return to a situation where we have enough of a ceasefire to get that aid in.

JUAN GONZÁLEZ: We’re also joined by Mohammed Badran, who’s a co-founder of Syrian Volunteers. What was the message that you gave to the summit? And can you talk about your own experience as a refugee?

MOHAMMED BADRAN: Yes, absolutely. Well, our message was like really clear at the summit. We showed—we showed the international community that they have to do more for refugees. And we showed them that, you know, being a refugee is more as an experience, that you—that you, like, for like—you know, for like a couple of time you will feel like, you know, you need help, but like afterwards you can’t provide help. So, not as like always you stay in a victim and as, like, people—you know, they always look at you, that you are, you know, like—they always underestimated you. So, that was actually our message to the—like, during the U.N. summit. And we also—we focused on how like the higher education is actually really almost impossible to get an access to real universities. So, that actually was our message. 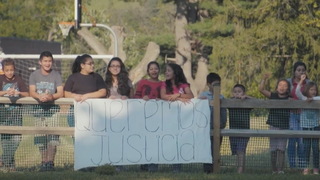