We continue to look at the U.N. Summit for Refugees and Migrants, which produced a nonbinding declaration on developing a coordinated and humane response to the migration crisis. The United States objected to language in the original draft of the resolution that said children should never be detained. This comes as teenagers held at the Berks County Residential Center are protesting their indefinite detention. Some have been held more than a year while they seek asylum with their mothers, who are also detained. We get response from detained 16-year-old Estefany Adriana Méndez of El Salvador, and we’re joined by two guests who participated in a shadow summit focused on the U.S. response to Central American refugees. Dr. Allen Keller is associate professor of medicine at NYU School of Medicine and co-founder and director of the Bellevue/NYU Program for Survivors of Torture and the NYU Center for Health and Human Rights. His letter published in today’s Washington Post is headlined “A refugee crisis in our own back yard.” We also speak with Elvis Garcia, a migration counselor at Catholic Charities. He is a former unaccompanied minor who fled Honduras at the age of 15.

StoryJul 17, 2014U.S. Turns Back on Child Migrants After Its Policies in Guatemala, Honduras Sowed Seeds of Crisis

JUAN GONZÁLEZ: We continue to look at the U.N. Summit for Refugees and Migrants, which produced a nonbinding declaration on developing a coordinated and humane response to the migration crisis. The United States objected to language in the original draft of the resolution that said children should never be detained. The agreement ultimately said children should, quote, “seldom, if ever, be detained,” and calls it a, quote, “measure of last resort.”

This comes as teenagers held at the Berks County Residential Center—an immigrant family jail in Pennsylvania—are protesting their indefinite detention. Some have been held more than a year while they seek asylum with their mothers, who are also detained. This is 16-year-old Estefany Adriana Méndez from El Salvador responding to the United States’s insistence on changing the language of the summit’s declaration.

ESTEFANY ADRIANA MÉNDEZ: [translated] They had said before they rejected it completely, but now they are saying it is an alternative measure. And I think it should not be that way, because the truth for all of us here, the children who are here, and the mothers, this is a horrible experience to be in detention, because more than a year of incarceration for a child is not just, without having committed any crime. The majority of us who are here, almost all of us—really, all of us—have family. We have family here to receive us. I have family in Maryland, in Los Angeles, in Florida. My father is in Texas waiting for us.

I am 16 years old. I am from El Salvador, and I entered the 20th of August in 2015. I arrived at Dilley, Texas, the 26th of August, and I was in that place for two months. There, my birthday passed; I turned 16. Then, on the 28th of October, we arrived at Berks and have been here for 11 months in this place. In total, I have 393 days in detention, and soon it will be my birthday. Truthfully, I hope not to turn 17 here, again, while incarcerated.

For more, we’re joined by two guests who participated in the shadow summit to discuss the U.S. response to the Central American refugees. Dr. Allen Keller is back with us, associate professor of medicine at NYU School of Medicine, co-founder and director of the Bellevue/NYU Program for Survivors of Torture and the New York University Center for Health and Human Rights. He’s recognized internationally for his expertise in evaluating and caring for survivors of torture. We are also joined in this segment by Elvis Garcia. Elvis Garcia is a former unaccompanied minor who fled from Honduras to the United States when he was 15 years old.

Dr. Allen Keller, let’s go right to the U.S. change of the language of the resolution. Explain what happened.

DR. ALLEN KELLER: Well, it just goes to show, language matters. And if it were as simple as saying, “As a matter of last resort, we detain children,” that sounds palatable. But I must tell you, the children at Berks and the thousands of women and children who have been detained from Central America infer this is not a measure of last resort, but a measure of first, second and third resort. And in addition to those teenagers that were mentioned, it’s important to note that in this gulag of family detention centers that has sprung up around the country, there, over the course of the last year, have been thousands of infants. At Berks, for example, there are several children who celebrated their first and second birthdays there. So these are kids, in addition to the young adults you mentioned. And it can only be said that these children and young adults are being robbed of that most sacred thing: childhood. And what really scares me is that in the case of the Central Americans, it’s without adequate protection.

JUAN GONZÁLEZ: And, Elvis Garcia, what message did you bring? Talk about your own experience leaving your homeland, Honduras, when you were 15 years old.

AMY GOODMAN: I wanted to ask Dr. Keller: How did the U.S. exactly lobby to change no kids should be in detention, which now is not just about the United States, it’s about the whole world, to, well, only seldom? How do they actually do it behind the scenes?

DR. ALLEN KELLER: Well, because the United States has power. And frankly, it’s always been the case. In international politics, we play hardball. Now, I mean, this whole issue, though, speaks to a dichotomy or a disconnect with President Obama. I mean, his words about humanizing refugees, I think, are so compelling, so important, and I deeply believe he means them. On the other hand, somewhere along the line, in his head or his policy advisers’, it clicked: “Oh, these children and women are not refugees.” So it all comes back to—there’s a saying in science: “garbage in, garbage out.” So, the underlying problem was, from the very beginning, we didn’t realize or perceive them as refugees. We perceived them as illegal immigrants, and the solution was enforcement. And when the solution is enforcement, the solution is detention. When it’s a humanitarian crisis, there are other things.

It also speaks to—and the president mentioned this, as well—how we look at refugees has changed. We used to think of refugees as a group that was there for a few weeks, a month, maybe a year. We have refugee camps around the world that have basically been there for more than 20 years. And the Central Americans also demand us to broaden how we think about refugees, both in terms of how we treat them and how we address the root causes.

JUAN GONZÁLEZ: Well, I think probably President Obama’s most quoted line from yesterday’s address was that if you—countries who build walls imprison themselves. And yet here we are—in essence, his policy is imprisoning people once they get into the United States.

DR. ALLEN KELLER: Well, that’s why I remain, in spite of being deeply frustrated and saddened, I also remain deeply optimistic, because I know the president means that. I know his advisers do. And with the stroke of a pen, he could end family detention. And so, I look forward to holding that piece of paper for him to do so, because this is a matter not only of human rights, but of health.

AMY GOODMAN: Wait. With the stroke of a pen—I mean, instead of ending detention, he changed the language so that it wouldn’t be a resolution anywhere in the world that children would not be detained. And for that, I wanted to get, Elvis, your comment. You came over when you were 15. Your response to children detained?

ELVIS GARCIA CALLEJAS: I don’t think there should be detention for anybody who’s seeking protection. We understand that there are thousands of families fleeing Central America because of violence. And they come to the U.S. looking for protections. And I think that we should start welcoming immigrants and refugees to the U.S. We shouldn’t be putting them in detention. Especially when they come looking for protection, we should provide that protection instead of putting them in detention facilities.

AMY GOODMAN: We have 10 seconds. Juan?

JUAN GONZÁLEZ: And just quickly, how this violence has arisen so quickly over the last 10, 15 years in Central America?

ELVIS GARCIA CALLEJAS: Because when I came to the U.S., I came—even though there were a lot of violence where I was living, I came mainly for economic reasons. But that has changed now.

AMY GOODMAN: I want to thank you both for being with us, a conversation, of course, we will continue to have, Elvis Garcia and Dr. Allen Keller. We will link to your letter published in The Washington Post today at democracynow.org.

U.S. Turns Back on Child Migrants After Its Policies in Guatemala, Honduras Sowed Seeds of Crisis 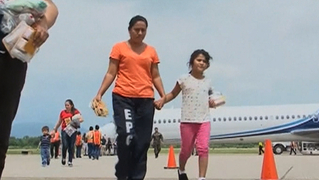 U.S. Turns Back on Child Migrants After Its Policies in Guatemala, Honduras Sowed Seeds of Crisis