On Saturday in North Dakota, security guards working for the Dakota Access pipeline company attacked Native Americans with dogs and pepper spray as they resisted the $3.8 billion pipeline’s construction on a tribal burial site. As the video of Saturday’s action went viral, people immediately began comparing the dog attacks at Standing Rock to the violent crackdown against African-American protesters during the civil rights movement. For more on the dog attacks at Saturday’s protest, we speak with Jonni Joyce. She’s an expert in law enforcement canine handling with more than 25 years of experience. She is the head of the consulting firm Jonni Joyce Seminars, International in South Dakota.

AMY GOODMAN: Women singing as they made their way down to the water from the main protest encampment on the Standing Rock Sioux Reservation, moving down to the water to perform their water ceremony as they seek to protect the Cannonball and Missouri Rivers from the Dakota Access pipeline. This is Democracy Now!, democracynow.org, The War and Peace Report. I’m Amy Goodman, as we continue our coverage of the standoff at Standing Rock.

WINONA LADUKE: And the governor, you know, what I feel like telling the governor is that, you know, you are not George Wallace, and this is not Alabama. You know? This is 2016, and you don’t get to treat Indians like you have for those last hundred years. We’re done. You know? It’ll be interesting times.

AMY GOODMAN: That was Winona LaDuke, longtime Native American activist, who had set up her tipi in the Red Warrior Camp in North Dakota Saturday morning. Well, as the video of Saturday’s action went viral, people immediately began comparing the dog attacks at Standing Rock to the violent crackdown against civil rights in Birmingham in 1965, in Birmingham, Alabama.

For more on the dog attacks at Saturday’s protest, we’re joined by Jonni Joyce. She’s an expert in law enforcement canine handling, with more than 25 years’ experience. She’s head of the consulting firm Jonni Joyce Seminars, International in South Dakota.

Jonni, welcome to Democracy Now! We just played the video of dogs attacking the Native Americans, hundreds of people who had come up on this site to protect their land, the tribal burial ground and the sacred sites—the dogs that the security at times unleashed, that bit the horses, that bit the people. One dog, the mouth and nose of the dog were dripping with blood. As you took a look at this video, what could you tell us about what these dogs were trained to do?

JONNI JOYCE: Well, Amy, first of all, thank you for having me. And I’m very happy that Democracy Now! was there in order to get independent video in reference to what happened with the dogs. Your question is: What were the dogs trained to do? What the dogs were not trained to do was to be professional security dogs or professional law enforcement dogs. What I witnessed on the video was absolutely horrific and a chaotic scene. It appeared that the handlers were not trained properly in order to manage a dog that has been trained in some type of controlled aggression. And basically, what it looked like was a bunch of alligators at the end of leashes being put on the Native Americans there that are protesting. It absolutely was an egregious use of canines.

AMY GOODMAN: Can you explain what bite work is?

JONNI JOYCE: Yes. Bite work is a terminology that is used in the working dog industry to where a canine is taught to bite a human being. And in this process, in the training process, the human being is protected by gear. Law enforcement will utilize this training in order to protect handlers and deal with criminals that need to be brought under control with this level of force. What happened there at the protest, in my opinion, was an excessive use of force by civilians that obviously did not have proper training in the utilization of dogs that are trained to bite humans.

AMY GOODMAN: We interviewed one person after another who were bitten by dogs. And as one of the security was holding the dog, whose mouth and nose were dripping with blood, I said to her, “Your dog is biting protesters.” She simply moved down the line, and the dog moved on to attack more of the Native Americans who were there.

JONNI JOYCE: Yeah, in that particular part of the video, the female handler with the black dog moved away from you. And this is of particular concern to me, in reference to this, because she moved down the line. And then there were about six protesters that were, oh, approximately 15 feet in front of her, and without the protesters moving forward or making any aggressive act towards her, she pushed her dog into the crowd. And you can see on the video that the dog had enough sense not to go in the crowd. The dog actually backed up. And then she corrected the dog and pulled the dog into the crowd. And this is especially concerning, in reference to this application of the use of force, and it certainly provides evidence that these people were improperly trained.

AMY GOODMAN: We are trying to establish where the dogs are from. There were Ohio license plates. And on Facebook, a company, Frost Kennels in Ohio, is taking—said that they were their dogs that were used. Do you know them, Jonni Joyce?

AMY GOODMAN: Well, I want to thank you for being with us—and the question of what they’re doing in North Dakota. We want to thank you, Jonni Joyce, expert in law enforcement canine handling with more than 25 years’ experience, head of the consulting firm Jonni Joyce Seminars, International in South Dakota. 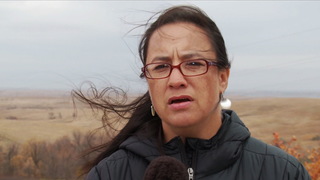