Trauma, Then More Trauma: How Long is Too Long for Immigrant Children to Be Detained?

How long is too long for a child to be held in detention? At least five families have been held for a full year in the Berks Residential Center in Pennsylvania while their asylum case is appealed, even though they could be released to live with immediate family members and relatives in the United States. We discuss the impact of indefinite detention of asylum-seeking women and children with Bridget Cambria, an immigration lawyer who represents many of the families detained at the Berks County Residential Center, and with Dr. Allen Keller, who is an expert in the evaluation and treatment of detained immigrants and asylum seekers. Dr. Keller visited Berks in August to observe the families there. He is Director of the Bellevue/NYU Program for Survivors of Torture, and an Associate Professor at the NYU School of Medicine.

JUAN GONZÁLEZ: Well, at least five families have been held for a full year in the Berks residential center in Pennsylvania while their asylum cases are appealed, even though they could be released, like Maria, to live with immediate family members and relatives in the United States. Senator Bob Casey, a Democrat from Pennsylvania, recently wrote a letter to the Department of Homeland Security head, Jeh Johnson, saying, quote, “The women and children currently in detention, in many instances have come here from some of the most violent nations on Earth, often escaping rape, murder, and domestic assault. These families deserve a fair opportunity to seek asylum. They do not deserve to be treated as criminals.” Casey’s staff is set to visit Berks as early as this week, possibly with staffers from other offices.

AMY GOODMAN: Well, to discuss the indefinite detention of asylum-seeking women and children at the Berks County Residential Center—some as young as two years old—we’re joined by Bridget Cambria, an immigration lawyer who represents Maria and many of the families detained at Berks, as well as Dr. Allen Keller, expert in the evaluation and treatment of detained immigrants and asylum seekers. He visited Berks in August to observe the families there. He’s director and co-founder of the Bellevue/NYU Program for Survivors of Torture and serves as a primary care physician for many patients in the program. He’s also a member of the international advisory board for Physicians for Human Rights, as well as assistant professor at New York University’s School of Medicine.

Bridget Cambria, let’s begin with you, more on Maria. React to what she said here as she sat there with this—I don’t like to say ankle bracelet. I mean, this is a monitoring metal ring around—shackle around her leg. Talk about her situation now.

BRIDGET CAMBRIA: That’s correct. Now, I don’t—I don’t agree with putting ankle bracelets on everyone who’s released, but, unfortunately, everyone who’s released from Berks does get an ankle bracelet placed on them. Listening to her story, it’s very familiar. It’s the same account that most of the women in Berks gave. What I find most striking, though, with Maria is that her concern now, now that she’s free and she sees her children happy, she’s still thinking about all the women and children who are stuck in Berks, and stuck in Berks for more than a year now.

JUAN GONZÁLEZ: And interestingly, she was released, but she was not part of a habeas case that several of the women in Berks have filed. Could you talk about the difference between how the authorities are treating those who are part of the habeas case versus those who are not?

BRIDGET CAMBRIA: Sure. What’s very clear is what they’re doing, immigration, is treating them in different ways. There’s clear disparate treatment between those who are pursuing their case federally and those who are administratively pursuing their case. So far, about five women have—women and children have been released since the hunger strike began. All of them were not part of that federal habeas case. And, in fact, in these meetings, where attorneys were not allowed to be present, the women and children in Berks requested attorneys to be present at these meetings. It was denied. At that meeting, they were specifically told, if you are pursuing your case in the federal court, we could not help you. Anyone who was outside of that case, however, though, was talked to, and several were released because of that.

AMY GOODMAN: So, this ICE official, Thomas Decker, comes in, lays out apples and says, “If you eat this apple, you can leave.” I mean, this is almost biblical.

BRIDGET CAMBRIA: Yes. It was quite striking when we were told what happened. But in those meetings, there’s a—

AMY GOODMAN: But the other woman did not get released who ate the apple.

BRIDGET CAMBRIA: That’s correct. So, two were treated in that same manner. One has been released. One is still detained.

JUAN GONZÁLEZ: And, Dr. Keller, I’d like to ask you about Maria’s account, especially this whole issue of what amounts to basically sleep deprivation going on with the women and their children, and what you—your sense of what’s going on there, as a medical doctor?

DR. ALLEN KELLER: Right. So, I went to Berks at the request of Bridget and her colleague, Carol Anne Donohoe, who are the attorneys representing these women. And frankly, one of the great stories, I think, in this whole travesty is attorneys like Bridget and Carol Anne and others across the country have really stepped up to provide pro bono services. So, I went to do evaluations and apply my expertise as a physician who’s cared for survivors of torture and trauma for over 20 years. And what I found was really quite striking.

This group of women and children, who have been kept in the equivalent of indefinite detention—that is, not knowing when or if they’re going to be released, when or if they are going to be deported—are horrifically traumatized by these experiences. We are causing harm by keeping these women and children, many of whom, most of whom, fled not because they wanted to, but, as one woman said to me, because they had no choice. They were fleeing for their lives. And the women who are now on the hunger strike, many of whom I spoke to, consistently, every one of them, said they are doing this not for themselves, but for their children, for their safety. I mean, it reminds me—you know, back in the ’80s, we know about the women, the Mothers of Plaza de Mayo, mothers in Argentina who went to protest for their children, who had been disappeared as part of the dirty wars. These really are the mothers of Berks, in a sense, are these latter-day mother heroes of our time.

Activists Sit In at Sen. Kaine’s Office to Demand Release of Families Detained at Berks for 1+ Year

NEXTActivists Sit In at Sen. Kaine’s Office to Demand Release of Families Detained at Berks for 1+ Year 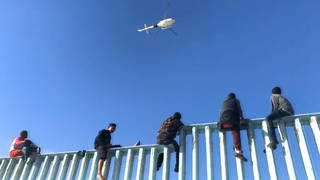