The Intercept’s Matthew Cole reports that Rep. Ryan Zinke, President-elect Donald Trump’s pick to be secretary of the interior, committed travel fraud when he was a member of the elite Navy SEAL Team 6, according to three former unit leaders and a military consultant.

StoryOct 05, 2022“There’s Going to Be a Fight”: Oath Keepers Trial Reveals Plan to Use Violence to Keep Trump in Office

AMY GOODMAN: This is Democracy Now!, democracynow.org, The War and Peace Report, as we turn to another of Donald Trump’s picks for his Cabinet. This piece in The Intercept is headlined “Trump’s Pick for Interior Secretary Was Caught in 'Pattern of Fraud' at SEAL Team 6.” In it, Matthew Cole writes, “A Montana lawmaker tapped by President-elect Donald Trump to be secretary of the interior committed travel fraud when he was a member of the elite Navy SEAL Team 6, according to three former unit leaders and a military consultant. In announcing the nomination of Republican [Rep.] Ryan Zinke, a retired Navy SEAL commander, Trump praised his military background. [He said,] 'As a former Navy SEAL, he has incredible leadership skills and an attitude of doing [whatever] it takes to win.'” Matthew Cole, you dug deep into Zinke’s history. Talk about what he did as a Navy SEAL and why, ultimately, he was forced out.

MATTHEW COLE: So, Congressman Zinke was a member of SEAL Team 6 as a mid-career officer and junior officer in the 1990s. And he—during the war in Bosnia, in which SEAL Team 6 was assigned, he frequently came home to the United States after a deployment and, instead of coming back to Virginia Beach, would fly to Montana, where he’s from, Whitefish, and work on a house that he had there, that he was hoping to live in when he retired. And he did this several times and was warned, I think after one or two times, that what he was doing was travel fraud. He was expensing it to the U.S. government and calling it work, when in fact it was personal. And he was warned verbally not to do it, and then he got caught doing it again. And after he shifted positions inside SEAL Team 6, the people who followed him discovered his paperwork and realized he had been—he had a long pattern of it. And so they brought it to the command’s attention.

And the command—this was in 1999 or 2000, before the wars—decided that he had to leave the unit. They were going to, you know, spank him. But he wasn’t going to—they weren’t going to punish him or reprimand him in any way. And as one source said to me, the commander of—commanding officer of SEAL Team 6 at the time said, “We don’t want to punish him, because it will hurt his family. He’s got a family, and, you know, he’ll lose pay. And we don’t want to do that. He’s a nice guy.” And so, they wrote his evaluation report in such a way that he wouldn’t be allowed into SEAL Team 6, but he could leave the unit and continue on as a—in his career as an officer in the Navy SEALs. And that’s exactly what happened.

And, you know, in a lot of ways, Zinke is sort of too small a crook to be nominated for Trump’s Cabinet. But it gets at the issue of integrity and leadership in SEAL Team 6, the officer corps. And here was someone who made some serious mistakes and—

AMY GOODMAN: And explain further what he did and how many times he did it.

MATTHEW COLE: Yeah, oh, I’m not sure the specific number of times. We were told multiple times, in the range of four or five times. He would fly out to Montana and claim that it was some kind of SEAL Team 6-related endeavor. Publicly, he has stated that these were training trips. My understanding is, is that he never claimed that they were training trips, and that, in fact, what he was doing was helping to rebuild or renovate a house that he intended to live in when he retired from the military. He was—he’s a native of Whitefish, Montana. And so, he got caught. I couldn’t get a sense, actually, of—my sources couldn’t remember, because it was a long time ago—how much money was the total dollar figures.

He has—in his 2014 campaign, to give him his side of it, he reported that he wrote a check—returned a check to the Navy for something like $214, that covered a travel voucher that he did, and that he had been duly punished for this. He had made a poor decision. He didn’t—he portrayed it as a—something that was justifiable, but that the Navy ultimately decided they wouldn’t pay for.

My sources, who were both contemporaries of his at the time at SEAL Team 6, as well as senior to him, said that that was not an honest portrayal, that he in fact did it several more times than that and for higher amounts, and that there was nothing close to a justifiable reason for his travel. He was spending government time and resources for his own personal efforts on a home, essentially.

MATTHEW COLE: Yeah, you know, a lot of silence. I mean, Zinke has still never responded. The Trump team, the transition team, called me to say that—they didn’t dispute any facts in the story. They only said this was old news. And, you know, they had confidence, the president-elect had confidence in the congressman.

AMY GOODMAN: They called you because you called them?

MATTHEW COLE: Yeah, we had called—we had sought comment before the story ran. They responded after the story published. Zinke’s team never responded. You know, there’s been some response. Actually, a lot of people from Montana responded to our story, on both sides, saying that he was honorable, other side saying that, you know, he was terrible. And he’s their congressman, so it’s a political issue. I think I do—I do know—and it wasn’t in this piece, but there is more to—you know, he had some subsequent positions in the Navy SEALs that were—had some—there were some ethical flags raised in those positions, as well, towards the end of his career. And we may or may not get to those in the coming days. But there was—this was not an isolated incident, is the sense that I have from talking to folks who were in the Navy with him.

AMY GOODMAN: And he was forced to leave?

AMY GOODMAN: And explain the difference.

MATTHEW COLE: The difference between being forced to leave versus?

AMY GOODMAN: Forced to leave SEAL Team 6 but not the Navy.

MATTHEW COLE: So, SEAL Team 6 has—and any unit can do this, but there are effective ways to get someone to move on, which is that when their time is up, when their pre-assigned task is over, their assignment, the evaluation is written in such a manner, as I understand it, that they cannot get another job within that command afterwards, because of the way the evaluation is written. And so, you’re never fired. You are never dismissed. You are—your time is up, and you are quietly told that you just won’t be able to come back here. But no one else is told, going forward, in any other assignment that you get, that that’s what happened to you.

AMY GOODMAN: You write about a celebration, a reunion, really, of Navy SEALs back in Virginia at the headquarters. Describe where that his and what happened.

MATTHEW COLE: So, each year in October, SEAL Team 6 has what it calls its annual stump muster, which is like a reunion, and it brings back old members of the command, original members of the command, people who have just recently retired, current members and their families. And, you know, they—it’s a party. And my story ends with a former senior leader of the command who went back in October of 2011. The organization, the headquarters, had just completed a $100 million building and facility and essentially were christening it. And it was under the command then of Captain Wyman Howard, who had just taken over at SEAL Team 6.

And he was—this former SEAL team leader was standing in a group with old friends, and he was handed a portfolio, a ring-bound book. And he opened it up, and someone said to him, “This is our greatest hits.” And he looked down, and they were a collection of canoed heads since 9/11. And what he realized, and I subsequently was able to confirm, was that this collection was not the private collection of some member of SEAL Team 6. This was the SEAL Team 6 official collection and photo book that they were sending around as entertainment at a private party, essentially, but out in the open. And the senior who saw it decided after he left—he was disgusted with what he saw, and decided he was never going to—he has not gone back to the command for a reunion since, because of how upset he was with the lack of morality and the sort of, you know, bloodlust and glee, you know, the gleefulness around essentially what is their professional work.

AMY GOODMAN: Matthew Cole, I want to thank you for being with us, national security reporter for The Intercept. We’ll link to his new exposé, just out, “The Crimes of SEAL Team 6.” This is Democracy Now! I’m Amy Goodman. Thanks for joining us.

“There’s Going to Be a Fight”: Oath Keepers Trial Reveals Plan to Use Violence to Keep Trump in Office 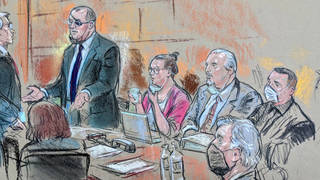 “There’s Going to Be a Fight”: Oath Keepers Trial Reveals Plan to Use Violence to Keep Trump in Office