In one of his final acts in office, President Obama shortened the sentences of 209 prisoners and pardoned 64 individuals on Tuesday. The list included Army whistleblower Chelsea Manning, who is now set to be freed on May 17, after Obama reduced her sentence from 35 years to seven. According to her attorneys, she is already the longest-held whistleblower in U.S. history. Manning leaked more than 700,000 classified files and videos to WikiLeaks about the wars in Iraq and Afghanistan and U.S. foreign policy. She has been subjected to long stretches of solitary confinement and denied medical treatment related to her gender identity. We speak with Nancy Hollander, Manning’s appellate attorney, and Chase Strangio of the ACLU, who represents Manning in a lawsuit against the Pentagon for denial of medical care related to her gender dysphoria.

Later in the program, we’ll look at the cases of Peltier and Oscar López Rivera, but first to Chelsea Manning, who’s now set to be free May 17th, after Obama shortened her sentence from 35 years to seven. According to her attorneys, she is already the longest-held whistleblower in U.S. history. She’s been in military custody since May 2010. Manning leaked more than 700,000 classified files and videos to WikiLeaks about the wars in Iraq and Afghanistan and U.S. foreign policy. She’s been subjected to long stretches of solitary confinement and denied medical treatment related to her gender identity. Chelsea Manning attempted to commit suicide twice last year.

Joining us now are two of her attorneys. Nancy Hollander is Manning’s appellate attorney. Chase Strangio of the ACLU represents Manning in a lawsuit against the Pentagon for denial of medical care related to her gender dysphoria. Also with us is The Intercept’s Jeremy Scahill, author of the recent piece, “The True Scandal of 2016 was the Torture of Chelsea Manning.”

We welcome you all to Democracy Now! Chase Strangio, your response to what President Obama did yesterday?

CHASE STRANGIO: Well, I just—I first want to thank you and everyone who supported Chelsea over the years. The reality is that this was a mass mobilization effort, keeping her story alive, led by Chelsea herself and all of the people who made sure that nobody forgot the justice that she fought for and the incredible symbol of democratic principles and advocacy that she really embodies. Yesterday was an incredible day for us who care about her. As I’ve said time and time again, President Obama really had her life in his hands. And it’s such a relief that he acted on the side of mercy and justice here.

AMY GOODMAN: Have you spoken to Chelsea?

CHASE STRANGIO: Unfortunately, we haven’t spoken to Chelsea, which is a bit concerning, but we’re remaining hopeful that we will be able to speak with her today and actually be able to share this news. It’s quite unusual for the individual to not be informed of their commutation with their attorneys. But we know that, you know, she was on standby, waiting for this. I spoke with her yesterday around 2:00 p.m., and she was just her sort of hopeful, pragmatic self, waiting for news. And we were all hoping and praying with her. So, hopefully, today we’ll connect with her and get to share in this incredible moment that really did save her life.

AMY GOODMAN: You believe she was the longest-held whistleblower?

CHASE STRANGIO: Yeah, absolutely. She has served seven years already. The 35-year sentence was egregious at the time. It’s particularly egregious in retrospect. And she has served seven years. It is absolutely preposterous to hear people saying that there are no consequences for her actions. She has been tortured and imprisoned, denied basic medical care. She has suffered so much, and it is time for her to be free.

AMY GOODMAN: Nancy Hollander, the response on the networks—I was watching CNN last night. The overwhelming response of the guests that they’ve had on—let me go to some of the comments. Republican House Speaker Paul Ryan released a statement protesting the commutation, saying, quote, “This is just outrageous. Chelsea Manning’s treachery put American lives at risk and exposed some of our nation’s most sensitive secrets. President Obama now leaves in place a dangerous precedent that those who compromise our national security won’t be held accountable for their crimes.” Meanwhile, Republican Senator John McCain of Arizona called the commutation a “grave mistake” that may, quote, “encourage further acts of espionage and undermine military discipline.” He added, quote, “Thousands of Americans have given their lives in Afghanistan and Iraq upholding their oaths and defending this nation. Chelsea Manning broke her oath and made it more likely that others would join the ranks of her fallen comrades. Her prison sentence may end in a few months’ [time], but her dishonor will last forever,” McCain said. Nancy Hollander, your response?

NANCY HOLLANDER: They’re totally—it’s just false. The secretary of defense at the time, Gates, said that the worst that happened was some embarrassment for the United States. There was not a single individual ever identified who was harmed by what Chelsea did. What Chelsea did actually helped the United States. It helped Americans. It helped people around the world understand about human rights violations, understand—bring war home to people. She wanted people to see what happens to somebody who gets killed, what happens to people in Iraq and Afghanistan. She wanted to make this real, so that we would stop doing these kinds of things to people. And so, what they’re saying is exactly the opposite of what Chelsea did. There has never been a single bit of evidence that anybody was harmed or that national security was harmed. 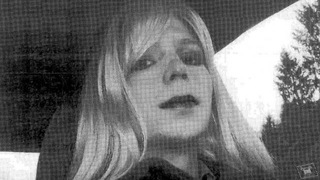