On Tuesday, President Obama also commuted the sentence of longtime Puerto Rican independence activist Oscar López Rivera, who has been imprisoned for about 35 years, much of the time in solitary confinement. In 1981, López Rivera was convicted on federal charges including seditious conspiracy—conspiring to oppose U.S. authority over Puerto Rico by force. In 1999, President Bill Clinton commuted the sentences of 16 members of the FALN, but López Rivera refused to accept the deal because it did not include two fellow activists, who have since been released. Under Obama’s commutation order, López Rivera will be released on May 17. Oscar’s brother José López Rivera joins us from Chicago, as well as Democracy Now! co-host Juan González.

AMY GOODMAN: On Tuesday, President Obama also commuted the sentence of longtime Puerto Rican independence activist Oscar López Rivera, who’s been in prison for 35 years, much of the time in solitary confinement. In 1981, López Rivera was convicted on federal charges including seditious conspiracy—conspiring to oppose U.S. authority over Puerto Rico. In 1999, President Bill Clinton commuted the sentences of 16 members of the FALN, but López Rivera refused to accept the deal—he could have been free then—because it didn’t include two fellow activists, who have since been released. Under President Obama’s commutation order, López Rivera will also be released on May 17th.

We welcome you to Democracy Now! José, how are you feeling today? When did you get the news?

JOSÉ LÓPEZ RIVERA: Well, we got the news at around 2:00 yesterday. And obviously, the lawyer, Jan Susler, received the call, and we had a teleconference with Congressman Luis Gutiérrez; the mayor of San Juan, Carmen Yulín; and the speaker of the New York City Council, Melissa Viverito; as well as Oscar’s only daughter, Clarisa. And there was a group of us who have been spearheading this campaign. And when she told us the news, everybody just went up—I mean, you could hear the screams and the—I mean, it was—we were unable to continue the meeting because of the incredible joy that was expressed. And while I’m at it, I want to express, obviously, our gratitude to everyone who supported my brother’s release. And Democracy Now! and Juan González were obviously one of the few voices that spoke about this campaign, and we want to thank you for that, as well.

AMY GOODMAN: Well, let’s bring Juan González into this conversation. Hi, Juan. Talk about the significance of the release of Oscar López Rivera.

JUAN GONZÁLEZ: Well, Amy, I think this is a momentous time for the people of Puerto Rico, and, José López, I know the campaign to free Oscar has been relentless throughout the years now. I remember back, for instance, just as recently as the Democratic National Convention—you remember that, José?

JOSÉ LÓPEZ RIVERA: Yes, we do.

JUAN GONZÁLEZ: We covered your activities there, of several hundred people who had come from all over the United States and Puerto Rico to raise the issue before the Democratic Party. Of course, candidate Bernie Sanders had—

JUAN GONZÁLEZ: —repeatedly raised the issue of Oscar López Rivera and pleaded with President Obama to release him. I go back to, you know, 1979. I was there when the four nationalists were freed by President Jimmy Carter, and they all came to a big rally on the West Side of Manhattan, and then, of course, in 1980, when several of the FALN members were—had their sentences commuted by President—I’m sorry, 1996, when President Clinton also released them. So I think that there’s been a long history in the United States, because Puerto Rico is still a colony of the United States, of people who support and believe in the independence of Puerto Rico doing everything that they can possibly to end colonialism. And so, this is really just another—another symbol of the reality that the United States still has not dealt with the status of Puerto Rico.

And the amazing thing is, in the case of Oscar López Rivera, basically the entire Puerto Rican diaspora and the nation of Puerto Rico were united. Virtually every elected official in the United States of Puerto Rican origin, as well as all of the different political parties and religious groups on the island, had been calling for Oscar López Rivera’s release now for decades. They didn’t necessarily agree with his vision of independence, but they understood that he was a freedom fighter and that he had been in jail far too long, considering the charges against him.

AMY GOODMAN: Let’s turn to Oscar López Rivera in his own words. In a rare video recording from prison, he said the charges against him were strictly political.

OSCAR LÓPEZ RIVERA: I think that the fact that I was charged with seditious conspiracy to overthrow the government of the United States speaks for itself. But the charge in reference to Puerto Ricans has always been used for political purposes. It goes back to 1936. The first time that a group of Puerto Ricans was put in prison was by using the seditious conspiracy charge. And this is—has always been a strictly political charge used against Puerto Ricans.

AMY GOODMAN: Among those who clearly supported him and certainly had the ear of President Obama were celebrities like Lin-Manuel Miranda, who is the creator of the Broadway hit Hamilton. José López Rivera, how important was this? And finally, what are Oscar’s plans once he gets out, or, I should say, perhaps your plans for him when he returns to Chicago?

JOSÉ LÓPEZ RIVERA: Well, first, I think he’s going to make a stop in Chicago and then go right to Puerto Rico, where his daughter lives and, obviously, a large part of my family lives.

But I think the campaign to free Oscar was an amazing campaign. I think that Juan has articulated quite well, but I would add that you have 10 Nobel Peace Prize laureate winners. You have Pope Francis. You have added the voices, obviously, of the Hispanic Congressional Caucus, the Black Caucus, the Progressive Caucus of the U.S. Congress. We delivered 105,000 written petitions to Obama on January 11th, which, by the way, was the birthday of Eugenio María de Hostos, one of the most important voices of 19th century Puerto Rican independence movement. We delivered 108,000 on We the People petition. So, obviously, it was a widespread movement that included the major leaders of all the major labor organizations—the AFL-CIO, AFSCME, SEIU—as well as hundreds and hundreds of very, very important voices from the religious community, from civil society, from the environmental movement. I mean, it was really a—this campaign captured the imagination of incredible numbers of people across the world. On June 20th of last year, in 45 countries there were rallies and events held in support of Oscar.

So, obviously, we’re very pleased with it. And Oscar will come and join us, and he will be part of the conversation to decolonize Puerto Rico.

AMY GOODMAN: José López Rivera, we thank you so much for being with us, executive director of the Puerto Rican Cultural Center in Chicago—

AMY GOODMAN: —and brother of Oscar López Rivera. And, Juan, congratulations on your first day of teaching at Rutgers University, speaking to you in New Brunswick, Democracy Now! co-host.

JUAN GONZÁLEZ: Yeah, Amy, I’d also like to add that the—you mentioned Lin-Manuel Miranda. He put out an interesting tweet yesterday when he heard the news. He said, “Sobbing with gratitude here in London. OSCAR LOPEZ RIVERA IS COMING HOME. THANK YOU, @POTUS.” And then he also sent a tweet to Melissa Mark-Viverito, the speaker of the New York City Council, who’s obviously also been campaigning for the freedom of Oscar. And he said, “when you talk to [Don] Oscar, díle I’ve got a show for him in Chicago. It’ll be my honor to play Hamilton the night he goes.” So, Lin-Manuel will be flying from London especially, whenever Oscar López Rivera is out, to play Hamilton personally in his show in Chicago.

AMY GOODMAN: Well, Juan, thank you so much. And again, José, thanks for joining us. And, of course, we will be there May 17th covering the release of Oscar López Rivera. This is Democracy Now!, democracynow.org, The War and Peace Report. 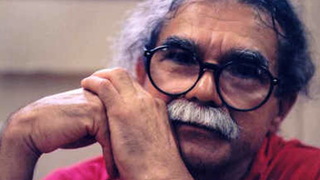