The Intercept’s Jeremy Scahill has revealed Betsy DeVos’s brother, Erik Prince, the founder of the mercenary firm Blackwater, has been quietly advising Trump’s transition team, including helping vet Cabinet picks. On election night, Prince’s wife, Stacy DeLuke, even posted pictures from inside Trump’s campaign headquarters. We speak to Scahill about his latest piece, “Notorious Mercenary Erik Prince Is Advising Trump from the Shadows.”

AMY GOODMAN: I want to ask you about Betsy DeVos’s brother, Erik Prince, who you’ve been talking about, the founder of Blackwater. In July, he spoke to Steve Bannon, who at the time was the head of Breitbart News, the white supremacist, white nationalist news site; Steve Bannon, who’s now Trump’s senior adviser. Prince said Trump should recreate a version of the Phoenix Program, the CIA assassination ring that operated during the Vietnam War, to fight ISIS.

ERIK PRINCE: It was a vicious, but very effective, kill/capture program in Vietnam that destroyed the Viet Cong as a military force. That’s what needs to be done to the funders of Islamic terror. And that would be even the—the wealthy radical Islamist billionaires funding it from the Middle East and any of the other illicit activities they’re in.

AMY GOODMAN: That was Erik Prince. The significance of what he’s saying here, Jeremy?

JEREMY SCAHILL: Well, you know, remember, Erik Prince views himself as the rightful heir to the legacy of “Wild Bill” Donovan, who was the head of the agency that was the precursor to the CIA. And, you know, immediately after 9/11, Erik Prince became very, very close to a number of people within the CIA and also Dick Cheney and Dick Cheney’s office. And they jointly came up with this idea that Erik Prince could run a kind of off-the-books hit squad that could roam the world conducting assassinations for the United States, and there would be no effective paper trail and no ability for Congress to engage in any oversight. Now, Leon Panetta, who was Obama’s CIA director early on in Obama’s term, said, “Oh, we shut down that program, and no one was ever killed.” I don’t believe that for one moment. That was—that was part of the legacy of the Phoenix Program, that was a murderous death squad operation in Vietnam, that also included enhanced interrogation. What Erik Prince being around Trump indicates to me is that—

AMY GOODMAN: And talk about what you found out about election night and what his role is. We just have 50 seconds.

JEREMY SCAHILL: Right, well, Robert Mercer, the billionaire hedge funder, his daughter Rebekah ran one of the most important super PACs to Trump, Make America Number 1 super PAC. And Trump—and Erik Prince and his mother, Elsa, were two of the largest contributors to one of the most significant super PACs that supported Donald Trump. Erik Prince is very close to Robert Mercer. Prince was also at the “Heroes and Villains” party that Mercer threw in Long Island after the election. And, in fact, there’s a picture that Peter Thiel, the right-wing billionaire who destroyed Gawker—a picture of Peter Thiel, Donald Trump and Erik Prince, that Peter Thiel says is not safe for the internet. But it’s clear that Erik Prince, through Betsy DeVos, through Robert Mercer and through his very right-wing paramilitary crowd, has the ear of President-elect Donald Trump. And our understanding, from a very well-placed source, is that Prince has even been advising Trump on his selections for the staffing of the Defense Department and the State Department.

AMY GOODMAN: We’re going to have a post-show discussion and post it online at democracynow.org. That’s Jeremy Scahill, co-founder of The Intercept. 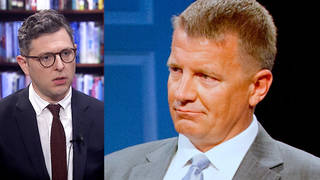