As British singer Rebecca Ferguson says she’d be willing to accept an invitation to perform at Donald Trump’s inauguration—but only if she’s allowed to sing Billie Holiday’s “Strange Fruit”—we discuss how the song was written by Lewis Allan, stage name for Abel Meeropol. We speak with Abel Meeropol’s adopted son Robert Meeropol, biological son of Ethel and Julius Rosenberg, who were charged with conspiring to share nuclear secrets with the Soviet Union and executed on June 19, 1953. The Meeropol brothers are making a last-ditch appeal to President Obama to clear their mother’s name and posthumously exonerate her.

AMY GOODMAN: That’s “Strange Fruit” by Lewis Allan, sung by Billie Holiday—Lewis Allan, the stage name for Abel Meeropol. This is Democracy Now!, democracynow.org, The War and Peace Report. I’m Amy Goodman. As we reported in headlines, the British singer Rebecca Ferguson has said she’d be willing to accept an invitation to perform at Donald Trump’s inauguration—but only if she’s allowed to sing the song “Strange Fruit,” saying, quote, “If you allow me to sing 'strange fruit' a song that has huge historical importance, a song that was blacklisted in the United States for being too controversial. A song that speaks to all the disregarded and down trodden black people in the United States. A song that is a reminder of how love is the only thing that will conquer all the hatred in this world, then I will graciously accept your invitation and see you in Washington.” Well, those are the words of [Rebecca] Ferguson.

I had the chance to speak with Robby Meeropol. “Strange Fruit,” written by Lewis Allan, the stage name for Abel Meeropol, who is the adopted father of Robert Meeropol. He is the son of Ethel and Julius Rosenberg, who were charged with conspiring to share nuclear secrets with the Soviet Union and executed on June 19, ’53. And I had a chance to talk to him about that song that was written by his adopted father.

ROBERT MEEROPOL: First he wrote a poem, and then he put it to music—music, by the way, that nobody can classify. It’s often referred to as blues, because Billie Holiday sings—is a blues singer. But it really doesn’t fit that genre. No one knows where it came from. And it was performed a few times, and Abel Meeropol played it for Billie Holiday at Café Society in Greenwich Village. And Barney Josephson, the owner, encouraged Billie to sing it. And she sang it. And the rest is history, because it exploded, in terms of interest. The thing about “Strange Fruit” that I think is so important for people to understand, it’s not a dirge. It’s not a mournful song. It’s an attack song. It’s an attack against the perpetrators of lynching. And as such, it is extremely powerful, and it’s why it was banned, it’s why it caused riots, it’s why it helped destroy Billie Holiday’s life.

AMY GOODMAN: In fact, Billie Holiday said each time she sang that song, she had to go in the bathroom and throw up afterwards. It so wrenched her. This song became big again, Robert Meeropol.

ROBERT MEEROPOL: Yeah, well, it’s been growing recently. But really one of the things that gave it a tremendous boost is somewhat ironic, in that Kanye West put Nina Simone’s version, or singing, “Blood on the leaves, blood on the leaves,” in the background of a rap. And it was a pretty bad rap, in my opinion. And that caused an internet controversy, particularly African Americans feeling that this was the equivalent of sacrilege to do this to this song, which got everybody thinking about “Strange Fruit,” everybody buying Nina Simone’s record, more people recording it. So, whatever Kanye West did that may offend people, it actually served a positive purpose in the long run.

AMY GOODMAN: That’s Robert Meeropol. The Meeropol brothers and Massachusetts Governor Michael Dukakis, among others, are making a last-ditch appeal to President Obama to clear their mother’s name, Ethel Rosenberg, and posthumously exonerate her. To see the whole interview, go to democracynow.org. 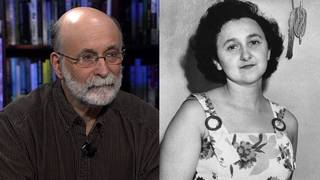