On Friday, Donald Trump signed an executive order temporarily banning all refugees from entering the country, and barring access for 90 days to nationals from seven majority-Muslim nations. The draconian measure instantly cut off access to the U.S. to 218 million people from Iran, Iraq, Libya, Somalia, Sudan, Syria and Yemen. We look at how Iranian Americans have been disproportionately impacted. We speak to Trita Parsi of the National Iranian American Council.

StoryApr 04, 2017Why Does U.S. Consider Iran the Greatest Threat to Peace, When Rest of World Agrees It’s the U.S.?

AMY GOODMAN: Over the weekend, Democracy Now! asked members of the audience around the world to share stories about Trump’s executive order and how it might be impacting them. Many of the calls we received were from Iranian Americans. This is one message.

MAHAN HARIRSAZ: Hi. My name is Mahan Harirsaz. I live in San Jose, California. I was born in Virginia. I’m a citizen. A couple of weeks ago, my stepsister, who has been living here as immediate family for five years now on a green card—two weeks ago, she had to go and see her father in the hospital in Tehran, because he’s dying. He’s on his deathbed. And he raised her, was everything to her. And he passed away the morning that Trump signed the executive order. And we found out that we couldn’t get her back, because she wanted to be with her father when he died. And now we don’t know what to do. We’re calling lawyers. I don’t want to say her name, because I don’t want to bring attention to her specifically, but that’s what’s happening to me. My name is Mahan Harirsaz, and I am an American citizen.

AMY GOODMAN: That was a call from just one person who watches or listens to Democracy Now! Joining us now in Washington is Trita Parsi, founder and president of the National Iranian American Council. Trita, can you talk about this one example and then fit it into what’s happening right now for the Iranian-American community, people in Iran and here?

TRITA PARSI: Yes, this is one out of many examples, a particularly sad one, but not necessarily an uncommon one. The Iranian-American community is mostly affected by this. Out of the visas that the United States government gave to citizens of these seven countries in 2015, 48 percent of them were Iranians, simply because of the size of the country and the size of the community in this country. So it’s also been disproportionately affected now.

And we’re hearing horror stories, particularly when it comes from students, who have their lives here, or, even worse, green card holders, who have been living here for years, have American children. And now some of them, on their way back from work trips, short work trips to London, to Mexico, have not been able to come back. They’ve actually been deported. One woman put on her Facebook that she doesn’t know what to do with her dog. Her car is still at the airport. She has her life here, and now she’s been deported from the country where she had a work meeting. So, we’re getting these stories all the time. There’s a coalition of Iranian-American organizations that will be filing a lawsuit, as well, in the next coming days.

JUAN GONZÁLEZ: And the reaction—the impact this is having internationally on—for instance, on Iranian society, the Iranian government? And what will be obviously expected is reactions, similar types of bans by some of these governments against Americans.

TRITA PARSI: Yes, unfortunately, the Iranian government has responded in kind, even though they have not gone as far as the Trump administration did in making the ban retroactive. Nevertheless, I think it is a step in the wrong direction. One of the good things that came out of the nuclear deal is that suddenly Americans could travel to Iran, and there could be more connections between peoples. If there were more connections between the people and they got to know each other better, that would create a buffer against any effort to escalate the tensions between the United States towards a military confrontation. Now that may once again be reversed. And one thing that is worrying a lot of people is that if this is a first sign of how the Trump administration will be approaching Iran, then the fear is that the tensions will not be able—the nuclear deal will not be able to withstand all of these tensions. And if the nuclear deal collapses, then we will be once again back in a situation in which the United States and Iran will be gravitating towards a military conflict.

AMY GOODMAN: Trita Parsi, this news of Iran testing a missile, can you tell us what that is about?

TRITA PARSI: It’s not clear exactly what has happened. The Iranians have not confirmed it. But if there is a ballistic missile test, the United States—sorry, the U.N. Security Council does call on Iran not to conduct these tests, but that is not a legally binding measure. So, it’s not a violation in the sense of being something illegal that they’ve done. Nevertheless, it is a provocative measure, particularly mindful of what is happening right now. And it will be very worrisome if this will be the beginning of further escalation between the United States and Iran. It will be very interesting to see how the Trump administration reacts to this.

JUAN GONZÁLEZ: And, Trita Parsi, how important has the public pressure been in mounting an opposition to this executive order?

TRITA PARSI: Well, I think the public outcry is the exact reason why there is such measures against this. We have, as a result of people going to the airports and the scenes that we’ve seen there, several measures now in Congress, both in the House and in the Senate, introduced yesterday in order to completely reverse this ban and make it much more difficult for the president to make decisions—these unilateral decisions in the future. And I think it’s absolutely critical that this public outcry continues, that it does not die off, because it is that outcry that is the engine of what will be happening in Congress right now.

JUAN GONZÁLEZ: Were you surprised that President Obama stepped forward so soon, making public comments about—critical of the order and supportive of the demonstrations?

TRITA PARSI: I think President Obama might be, himself, surprised that he felt that he had to speak out so soon, only nine or 10 days into the Trump administration. But he had made it quite clear that under certain circumstances, certain criteria, if those were met, he would be speaking out. And those were clearly met, mindful of the unconstitutionality of what the Trump administration is doing.

I want to say one thing that I think is very important. There’s been people who have been saying that they’re for immigration, they’re just against illegal immigration. Well, the people that are being targeted right now are legal. They were not illegal. They went through the regular channels. They applied for visas. They gave their fingerprints. They paid all the fees. They went to the interviews. They’ve been living here legally for years. These are not illegal immigrants. So, I’m not surprised that President Obama felt that he had to speak out.

SEN. BERNIE SANDERS: What Trump has done is give ammunition to the jihadists all over the world who have told their people that we in the United States hate them. We do not hate the Muslim people, and we want them to know that. So we say to President Trump: Rescind that ban. Thank you.

AMY GOODMAN: That was Bernie Sanders at a rally on Capitol Hill. Trita, you tweeted, “I want to repeat: Green card holders were handcuffed, their social media was reviewed, and they were asked their views on Trump.” And then you’ve got the headlines of a judge, of congressmen, of a senator going to Dulles, some being manhandled by Border Patrol, but not being allowed to talk to those who were being held. Can you comment?

TRITA PARSI: Yeah. If we go first to what Senator Sanders was saying, I think it’s absolutely critical to remind ourselves: This measure will not make America any safer. What Rudy Giuliani was saying, that these are countries that are targeted because they have terrorists that have been sent to the United States, is absolutely false. There are zero deaths caused in terrorist attacks by citizens of these countries on U.S. soil. Zero. Now, there are several other countries that have citizens who have been involved in terrorist acts in U.S. soil that have killed people, but none of those countries are on this list that the Trump administration has been using. And what Sanders said is also quite—

TRITA PARSI: This is feeding into a narrative of a clash of civilizations, which is exactly the narrative of ISIS. So it’s not surprising that those people, those jihadists, actually have been welcoming what Trump is doing.

AMY GOODMAN: Trita Parsi, we want to thank you for being with us, of the National Iranian American Council, and Linda Sarsour, thank you for joining us, as well.

Why Does U.S. Consider Iran the Greatest Threat to Peace, When Rest of World Agrees It’s the U.S.? 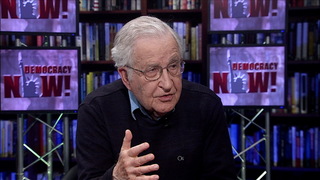 Why Does U.S. Consider Iran the Greatest Threat to Peace, When Rest of World Agrees It’s the U.S.?