As pressure mounts for President Obama to grant clemency to 71-year-old Native American activist Leonard Peltier before he leaves office, American University took action on Tuesday to remove a 9-foot statue of Peltier from its campus. The move came after a Fox News report on the artwork and a letter from the FBI Agents Association to the school’s president. We speak with Rigo 23, the artist behind the statue.

JUAN GONZÁLEZ: We turn now to new developments in the push for President Obama to grant clemency to 71-year-old Native American activist Leonard Peltier before he leaves office. The former member of the American Indian Movement was convicted of killing two FBI agents during a shootout on South Dakota’s Pine Ridge Indian Reservation in 1975 and has long maintained his innocence. Now the U.S. attorney whose office prosecuted him added his voice to those calling for Peltier to be given a compassionate release. James Reynolds told the Daily News, “I think it’s time. Forty years is enough.”

AMY GOODMAN: This comes as American University in Washington, D.C., took action Tuesday to remove a 9-foot statue of Leonard Peltier from its campus. The statue is based on a self-portrait by Peltier, and the university first welcomed it with a ceremony on December 9th. It was set to be on display through April. But after a critical Fox News report on the artwork aired last week, followed by a letter from the FBI Agents Association to the school’s president, the university issued a statement Monday that its, quote, “decision to host the Peltier statue required a more thorough assessment of the implications of placing the piece in a prominent, public space … With the benefit of a fuller review, we have made a decision to remove the piece from this location,” the university wrote.

Well, for more, we’re joined by Rigo 23, the artist who created the Leonard Peltier statue and brought it to American University, a longtime activist for and collaborator with Native communities and contributor to the forthcoming book Zapantera Negra: An Artistic Encounter Between Black Panthers and Zapatistas.

Rigo, in the pictures we are showing—and for people who are listening on the radio, you can go to democracynow.org—we can see a man in a cowboy hat removing the head of your Peltier statue yesterday. Can you explain exactly what happened? Has it been fully removed from the university?

RIGO 23: I believe the sculpture has been fully removed. As for explaining what happened, Amy, I’m really at a loss to be able to explain what happened. You know, the attitude of the university and the position put forth by the president is so devoid of logic that I really do not understand. As you might know, American University held a week-long symposium, organized by the Leonard Peltier Defense Committee, arguing for Leonard Peltier’s clemency. This was between December 5th and 10th. The sculpture was dedicated on December 9th and has been there until yesterday.

JUAN GONZÁLEZ: So, in other words, that you can discuss the issue, but you can’t have art on the issue or an actual sculpture on the issue.

RIGO 23: You know, and this—I only found out about this letter from the FBI Agents Association after the fact. What I was communicated by the director of the Katzen Arts Center is that the university had received credible threats to the sculpture, to the nearby buildings and to its community. And due to these threats having been deemed credible, they decided to remove the sculpture.

AMY GOODMAN: Is it true, Rigo, that it’s across the street from the Department of Homeland Security, the statue?

RIGO 23: It is across the street from the Department of Homeland Security. So, I mean, somebody threatens to harm the sculpture, so the reaction of the president is to dismantle, to behead and dismember the sculpture. They also threatened to harm buildings. I wonder what his approach to protecting buildings from being destroyed is. I hope it’s not akin to his notion of how to protect a sculpture from being destroyed.

AMY GOODMAN: Rigo 23, tell us why you made this sculpture.

RIGO 23: You know, I think Leonard Peltier has come to represent the plight of millions of people on this continent. You know? I think the fact that he is summarily represented as a cop killer is akin to President Barack Obama being described as an African without proper papers to be in the United States as a citizen. You know, they both come from communities to whom the exactly opposite happened. You know? All the—most Africans that arrived in this country came here against their will, were stripped of their identity, of their heritage, were prevented from knowing where they came from, who they really were. And likewise, Native—Leonard Peltier, as a member of the Native American community, represents a people that suffered genocide at the hands of people that were wearing uniforms of different, you know, federal forces of the United States government.

AMY GOODMAN: Rigo, before we wrap up—

AMY GOODMAN: You traveled the country to bring the statue to American University, which had originally been approved. And you had people stand in his feet, the feet of the sculpture, all through the country, including Standing Rock?

RIGO 23: Correct, Standing Rock and Pine Ridge and then Alcatraz Island in San Francisco, you know, here in Los Angeles in a community school in El Sereno. And so, more than 500 people have stood on those feet, demonstrating their solidarity with Leonard Peltier and sharing his journey, sharing his path.

AMY GOODMAN: If people want to see our conversation with Martin Garbus, one of his attorneys, who is pushing for clemency for Leonard Peltier, you can go to democracynow.org. Rigo 23, thanks so much for joining us. Rigo is a California-based political artist.

AMY GOODMAN: His 9-foot-tall statue of Leonard Peltier is now being removed from the campus of American University, though it was originally approved. 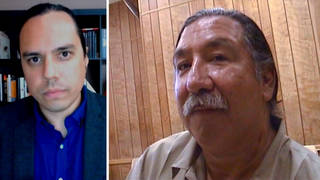