Republicans in the newly sworn-in 115th Congress are moving swiftly to repeal the Affordable Care Act, President Obama’s signature healthcare law. By a vote of 51 to 48 last week, the Senate approved a procedural measure clearing a way for a budget resolution that could repeal major sections of the law. The charge was led by Vice President-elect Mike Pence, who admitted his party has not yet decided how to replace the Affordable Care Act. “The Republicans’ rebranded version of the Affordable Care Act will be much meaner and skimpier,” says Dr. Steffie Woolhandler, a primary care physician. She is a lecturer at Harvard Medical School. “It will have much more in the way of copayments and deductibles, particularly for poor people who are unable to afford it.” Woolhandler is a professor at CUNY-Hunter College and the co-founder of Physicians for a National Health Program.

Web ExclusiveJan 10, 2017Part 2: If Obamacare Is Repealed, Advocates Expect “Meaner and Skimpier” Replacement for the Poor

AMY GOODMAN: Republicans in the newly sworn-in 115th Congress are moving swiftly to repeal the Affordable Care Act, President Obama’s signature healthcare law. By a vote of 51 to 48 last week, the Senate approved a procedural method clearing a way for a budget resolution that could repeal major sections of the law. The charge was led by Vice President-elect Mike Pence, who admitted Republicans, well, haven’t yet decided how to replace the Affordable Care Act.

VICE PRESIDENT-ELECT MIKE PENCE: The President-elect and I, working with the leaders of the House and Senate, are determined to keep our promise to the American people. And that all begins with repealing and replacing the failed policy of Obamacare.

AMY GOODMAN: President Obama made a rare trip to Capitol Hill last week, where he told minority Democrats not to help Republicans pass replacement measures that he called “Trumpcare.” At the White House, Press Secretary Josh Earnest said the Republican plan would have devastating consequences.

AMY GOODMAN: Senate Republicans are seeking to end billions of dollars in federal subsidies to states that have expanded Medicaid, as well as subsidies for private health coverage through health insurance exchanges.

For more, we head to Los Angeles, California, where we’re joined by Dr. Steffie Woolhandler, a professor at CUNY-Hunter College here in New York, primary care physician, lecturer at Harvard Medical School, co-founder of Physicians for a National Health Program.

Dr. Steffie Woolhandler, welcome to Democracy Now! In these last minutes we have left, we want to talk about two things. What’s happening? The Republicans call it “repeal and replace.” Democrats are calling it “repeal and run.” And then where you see—if you see there’s any road to single payer? But let’s start with what the Republicans are proposing—or not.

So, unfortunately, I think a lot of the structures of Obamacare were in fact structures first proposed by Republicans. They were first implemented in Massachusetts under Romneycare in 2006, first proposed by then-President Nixon and actually fully fleshed out by The Heritage Foundation. So, the very structure of Obamacare was a Republican idea. So I think the Republican replacement will at least structurally look like Obamacare, just be a much meaner—leaner, meaner, rebranded form of the Obamacare legislation.

AMY GOODMAN: Rebranded as Trumpcare. But what do you mean? For example, kids, until they’re 26, can be—can they be on their parents’ insurance? Pre-existing conditions? And what happens to the 20 million, 30 million people who are subsidized, who did not have insurance before, who are the poorest in this country?

DR. STEFFIE WOOLHANDLER: Well, a big issue is that the Republicans will be block granting Medicaid, so just turning over money to the states for Medicaid to pretty much do what they want with it. And we think that what the states will do is create very skimpy, very restrictive Medicare programs, as has happened in Indiana under Governor Pence—Vice President-elect Pence—where the minute a poor person misses a payment, they get thrown off of Medicaid for six months. They have to make copayments, which they can’t afford. And we do expect that that’s what Medicaid will look like going forward, is an extremely skimpy, stripped-down coverage that really does not allow people to get the healthcare they need.

We also anticipate that there will be more copayments, more deductibles for insured Americans. So, some of the protection under the Obamacare legislation will be removed. Probably there will be no guarantee of reproductive coverage, as there is under Obamacare. So, I think most of the punishment will be meted out against poor people, if you will, but will still probably have those structures of Obamacare.

The coverage up to age 26, frankly, that’s the thing that’s most likely to stay in a Republican plan. Pre-existing conditions? That will almost certainly change. According to the plans put forward by Representative Ryan, they’re only going to allow you the protection for your pre-existing conditions if you keep your insurance continuously throughout your life. And as many people know, that is something very, very difficult to do. Many people have a lapse of a day or a month in their insurance. And if you have that kind of lapse, you have no protection about pre-existing conditions, and your insurance company will be allowed to—new insurance company will be allowed to deny you coverage.

AMY GOODMAN: Donald Trump has talked about single payer in the past. And, you know, he’s talked about it on 60 Minutes. These were some of his comments during a Republican presidential debate in April.

DONALD TRUMP: As far as single payer, it works in Canada. It works incredibly well in Scotland. It could have worked in a different age, which is the age you’re talking about, here. What I’d like to see is a private system without the artificial lines around every state. I have a big company with thousands and thousands of employees. And if I’m negotiating in New York or in New Jersey or in California, I have like one bidder. Nobody can bid. You know why? Because the insurance companies are making a fortune, because they have control of the politicians—of course, with the exception of the politicians on this stage. But they have total control of the politicians. They’re making a fortune. Get rid of the artificial lines, and you will have yourself great plans. And then we have to take care of the people that can’t take care of themselves. And I will do that, through a different system.

AMY GOODMAN: And this is Donald Trump in an interview with Scott Pelley on 60 Minutes in 2015, coming out in favor of a form of single-payer health insurance.

DONALD TRUMP: Obamacare is going to be repealed and replaced. Obamacare is a disaster, if you look at what’s going on with premiums, where they’re up 45, 50, 55 percent.

SCOTT PELLEY: So how do you fix it?

DONALD TRUMP: There’s many different ways, by the way. Everybody’s got to be covered. This is an un-Republican thing for me to say, because a lot of times they say, “No, no, the lower 25 percent, they can’t afford private.” But—

DONALD TRUMP: I am going to take care of everybody. I don’t care if it costs me votes or not. Everybody’s going to be taken care of, much better than they’re taken care of now.

SCOTT PELLEY: —is going to be taken care of how?

DONALD TRUMP: They’re going to be taken care of.

DONALD TRUMP: I would make a deal with existing hospitals to take care of people. And you know what? This is probably—

SCOTT PELLEY: Make a deal? Who pays for it?

AMY GOODMAN: So, that’s President-elect Donald Trump speaking before he was president-elect. Dr. Steffie Woolhandler, you were never a supporter of Obamacare. What do you think of what he’s saying, albeit a while ago?

DR. STEFFIE WOOLHANDLER: Well, I certainly agree with him that single payer works very well in other countries that have it. People in those countries spend about half what we do on healthcare. And they get free healthcare from the day they’re born to the day they die, without copayments or deductibles. I don’t think President Trump is going to enact single payer, but I do think there’s tremendous possibilities for moving forward to single payer. At this point, it’s pretty clear the American people got a good look at Obamacare and said, “This is not a solution. This is not working.” And many of them do in fact support the idea of a single-payer Medicare for all. And that’s what we need to be pushing right now.

AMY GOODMAN: So what is the road to that from here, Dr. Woolhandler?

DR. STEFFIE WOOLHANDLER: Well, we need to be saying that we need to go beyond the Affordable Care Act to a single-payer system. Merely trying to defend the Affordable Care Act at this point is not going to work. The American people have seen it for three years and rejected it. And, you know, 20 million people got insurance, and that’s great, but there were 280 million people who saw no improvements in their healthcare. They still can’t afford healthcare despite having private insurance, because of the copayments and the deductibles in those narrow networks. So we need to go to a system that fixes the healthcare system for everyone. And that’s what’s politically possible right now. Defending the Affordable Care Act looks like defending the status quo in healthcare, and that’s not acceptable to most American voters.

AMY GOODMAN: Dr. Steffie Woolhandler, what you’re saying is too important. We’re going to continue the conversation after the broadcast and post it online at democracynow.org. (Watch Part 2 here.) Is there a road to single payer under President Trump? This is Democracy Now! Dr. Steffie Woolhandler, founder of Physicians for a National Health Program, thanks for joining us.

Part 2: If Obamacare Is Repealed, Advocates Expect “Meaner and Skimpier” Replacement for the Poor 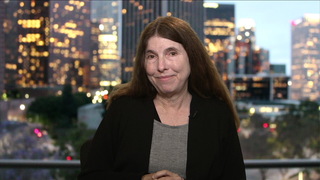 Part 2: If Obamacare Is Repealed, Advocates Expect “Meaner and Skimpier” Replacement for the Poor